September 27, 2022
A story of Izyum, a city in Kharkiv region, which became yet another place of Russian war crimes 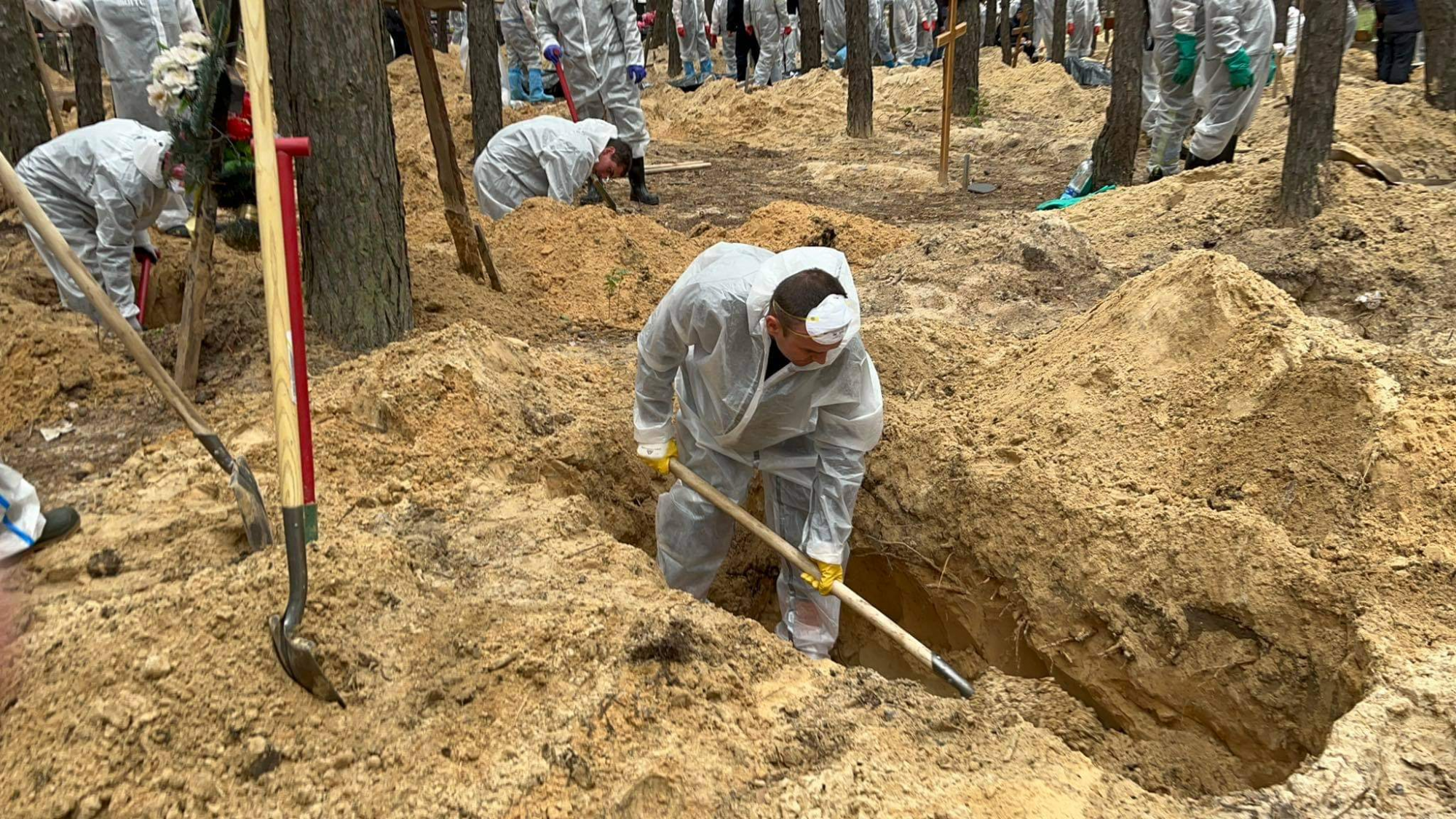 March 31, 2022 went down in history as the point of no return in the war. It was on this day that the city of Bucha, in Kyiv region, was liberated from the Russian invaders. At the same time, the world was shaken by the terrible footage of Russian crimes: hundreds of bodies of civilians brutally killed and tortured by the Russian occupiers, known as the Bucha Massacre.

It was a shock that the next day, April 1, 2022, Russian invaders captured the city of Izyum, which is in Kharkiv region. The city used to be unremarkable and unknown to the average European... until September 11, 2022, when the Ukrainian military liberated it in a successful counter-offensive.

Izyum was of exceptional tactical importance for the Russian occupying forces, as well as an extremely important transport and logistics hub. The city had been under Russian occupation for five and a half months. Russian propaganda tried to portray the Russians as "helping local residents" and that "Russia is here forever" in every possible way. However, the objective essence of the "Russian peace" is that it leaves behind only death, terror, and destruction.

Ukraine had previously repeatedly stated that the humanitarian situation in Russian-occupied territories could be catastrophic beyond even the horrors of Bucha, especially due to the fact that Russia had created an information blockade and did not provide any real data about the state of the local population. As expected, Russia's stay in Izyum turned into a series of bloody crimes against Ukrainians, or simply genocide. Izyum is now gaining the same terrible infamy as Bucha. 447 bodies have been discovered in mass graves: people were buried right in a local pine grove. Hundreds of people remain missing with no information on their whereabouts.

We traveled to Izyum to see with our own eyes as bodies are exhumed, as well as how the city itself is living after the occupation. 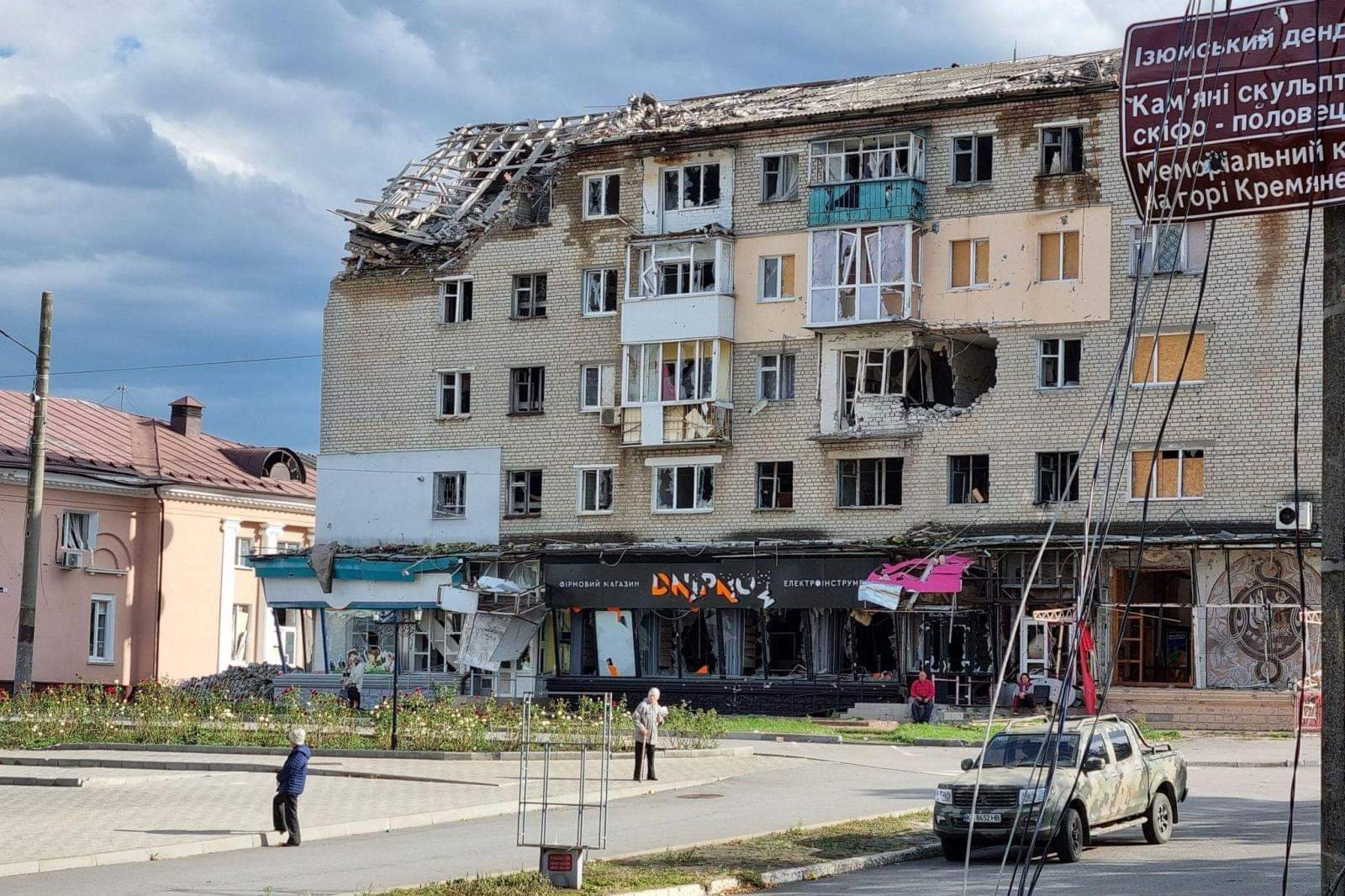 "Mom, I'm not hungry! Everything is OK! Don't worry," a young Ukrainian serviceman shouts into his mobile phone at a checkpoint near Izyum. While the police were checking my details and passing them along, I decided to go over to a working Starlink terminal to send a few messages.

We must be honest, this invention of Elon Musk is the only way anyone can communicate: the military, journalists, and civilians. After all, since March 2022, there has been no electricity, water, or gas in Izyum, not to mention such fundamentals of modern life as mobile communication and the Internet. In fact, local residents are deprived of the main benefits of civilization. That is why so many people gathered at this place. I didn't have time to connect to the Internet before the policeman started waving at me briskly. "You were allowed to enter the mass burial site and Izyum itself. Come on, drive faster, before people "upstairs" change their minds," he shouted. I didn't have to be asked twice.

After a few minutes, my car is already turning from the asphalt road to the pine forest. After driving a couple of hundred meters, I saw several parked buses, cars, and two refrigerators. In both of them, the label "Cargo 200" was pasted on the windshield (a military code word used in the Soviet Union and the post-Soviet states referring to the transportation of military fatalities. Officially, the term "Cargo 200" is military jargon to refer specifically to the corpses of soldiers contained in zinc-lined coffins for air transportation. Unofficially, it  is used to refer to all bodies of the dead being transported away from the battlefield). The drivers of these refrigerator trucks sat nearby and smoked cigarettes one after the other. Thanks to the special red and white ribbons tied to the trees, I understood where to go.

I stood for a few minutes, gathered my strength, and went to the mass burial site. Several rescuers and police officers came to meet me. One of them turned to me with the words: "You have to wear a mask, otherwise you simply physically cannot bear being near the graves". I have to admit, I prepared myself and pulled out of my pocket a special mask from the COVID-19 pandemic. One of the rescuers handed me a small box. "Take this ointment and rub it near your nose. After all, the corpses are in a semi-decomposed state. There is a very strong corpse smell. Believe me. This ointment will save you," he said. I opened this box and applied the ointment near my nose. It smelled very strongly of menthol. But it really killed all my nerve receptors. 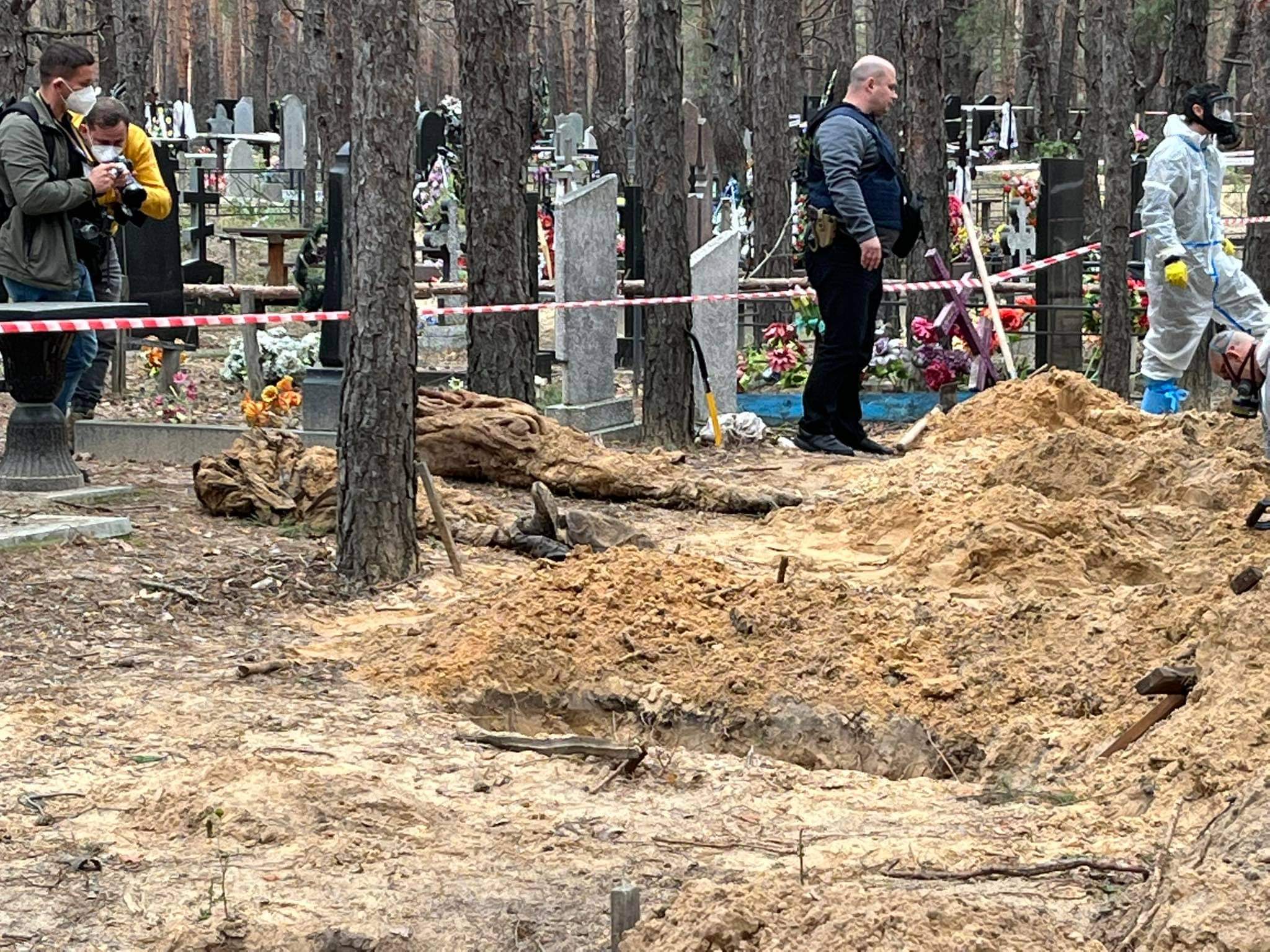 So I came to the mass grave. Many people were already working here. A few meters away from me, a voice sounded: "Come on, guys, let's go on the count of one-two-three-four." It was an employee of the State Emergency Service, working with others to pull another body out of the pit. They pulled him or her out. What remained of the body was wrapped in rags. Even further, I hear someone counting in the same way, but in French. "French experts must also be working here," I thought. Other workers carefully placed the body in black plastic bags.

Four rescuers carry a freshly exhumed corpse. One of the guys can't stand it, throws down the body, and starts vomiting loudly. But no one pays attention to it. He is immediately replaced. I approached a group of investigators standing nearby. A young woman, sobbing, says to her colleague, "It's just terrible, it's just terrible. There,"she points with her hand into the depths of the forest. "The corpses of an entire family lie on the ground: a grandfather, grandmother, father, mother, and two children. The corpses of the children were stacked on top of each other and wrapped in some kind of rag."

And she begins to cry even harder. Her colleague tries to calm her down, but in vain. No wonder why, when you look at the entire burial site and see hundreds of crosses. Another corpse has just been pulled from the ground. The police officers dragged him to the gathering point. "It's already the tenth," says one of the investigators. He diligently writes down all the information. The investigator preempted my question about the numbers on the plates. "It was the locals who buried people and numbered the crosses on the graves so that later it would be possible to somehow understand who lies there." The hard work continued.

The City of Izyum itself

I decided to go into the city. After crossing the pontoon bridge, I saw an apocalyptic picture: houses destroyed to their foundations, holes blasted in apartment buildings, parks and squares burned. I did not see a single building which survived undamaged. Eyewitnesses who were lucky enough to survive the Russian occupation say that Russian aircraft dropped bombs directly on high-rise buildings where civilians still remained... Dozens of families died under the rubble, and the exit from the city was blocked by Russian troops, who occupied the city. The men were interrogated with particular brutality, and the Russians were especially desperate to identify military personnel or those who participated in the anti-terrorist operation (Ukraine's struggle against Russian aggression in Donbas from 2014-2022). There were also rapes that took place in the first days of the occupation, and women were put in danger, even if they just came out of shelters. Destruction and unsanitary conditions reigned in the city, the occupiers painted the letter Z on Ukrainian symbols. And the Russian servicemen turned one of the Orthodox churches into a toilet.

I parked my car in the city center. There I saw a man and a woman sitting on a bench waiting for humanitarian aid from volunteers. Calling himself Oleksandr, he refused to be photographed, because he was afraid of the Russians returning and retaliating. "The Russians were constantly shelling the city. What is more, they shot exclusively at residential buildings. There were planes and missiles here. My nine-story building fell down on March 9 while I was at home. The building started to burn. First I pulled out my mother, then my trapped neighbor. We rescued those we could pull out, but other residents died instantly. When the rescuers started to retrieve the corpses, my mother, me, and a neighbor were those who recognized them. Then they were picked up by a car and taken to the cemetery. When it was cold, we lived in a neighbor's country house, and then we returned to the house in the surviving neighboring apartment - I sealed the windows there. From our house, there were 30 or 35 people who died in that basement. I don't have any emotions right now. All my tears shed long ago. No more nerves left," says the man.

Having heard our conversation, another man approached us. He also shared with us his story. His relatives died in Izyum during an airstrike on a five-story building. "The brothers were found in the basement, and the aunt and her brother's wife were found on the landing. It did not happen immediately, but already in April when people had begun to decay. People were buried in sacks and without coffins. The Russians bombed the entire city and destroyed almost all of its population," - he added.

The woman sitting on the bench also approached us. Olga, as she called herself, began to cry, talking about her experiences and misfortunes that happened during the Russian occupation. "We had finally started to live. We were building roads. We had started to earn money and go abroad. And here they are... These Russians. Who invited them to come here? Look around, they bombed everything here. How many people were killed by Russian shells?! Just for you to understand, corpses of people killed by the Russian shells were lying on the streets for weeks. No one removed the bodies for a long time. Only then did Russians force local mortuary workers to bury people in the forest. Look at what they did to us. We are all like savages. We cook food on fires, we do not remember the last time we took a shower or simply washed... I hate Russians. Let them know it".

We started the story by mentioning Bucha for a reason. The events in Izyum prove that in every settlement that is or was under Russian occupation, the Bucha tragedy, which became a symbol of Russian evil and hatred for Ukrainians, repeats and even surpasses itself.

I'll be honest: if someone in Hollywood wants to make apocalyptic films, then there is no need to spend money on creating scenery because the City of Izyum is the best option.

Russia fired 10 times more missiles at Izyum than at Mariupol. Now, this city is like a ghost. There is nor a single surviving building here. There are no communications, infrastructure, shops, or pharmacies. Nothing. Izyum is unfit for life, especially given the approaching winter. People who lived for six months without electricity, gas, light, water, and normal food, are like zombies. All of them are traumatized and demoralized to the extent that they are even afraid to talk about the "bacchanalia" created by the Russian military here. If hell exists, then part of it has definitely been recreated in Izyum.

Rooted in Reality. An Essay about the War

Ukraine is a complicated, changing country. It’s far too easy to imagine that the proclamations and positions presented by Ukraine’s government and civil society...
VIDEO
January 21, 2021

Soccer Becomes Real For Children With Disabilities In Eastern Ukraine

Inclusive education is quite a novelty in Ukraine, where the overall inclusion rate is just 7%. Our new video tells about the only soccer academy in Eastern Ukraine...