Life During the Occupation of Hostomel

Test for the Future of Ukraine: a View from War-Affected Mykolaiv

June 29, 2022
Putin's success in his war against Ukraine would be a defeat for democracy. 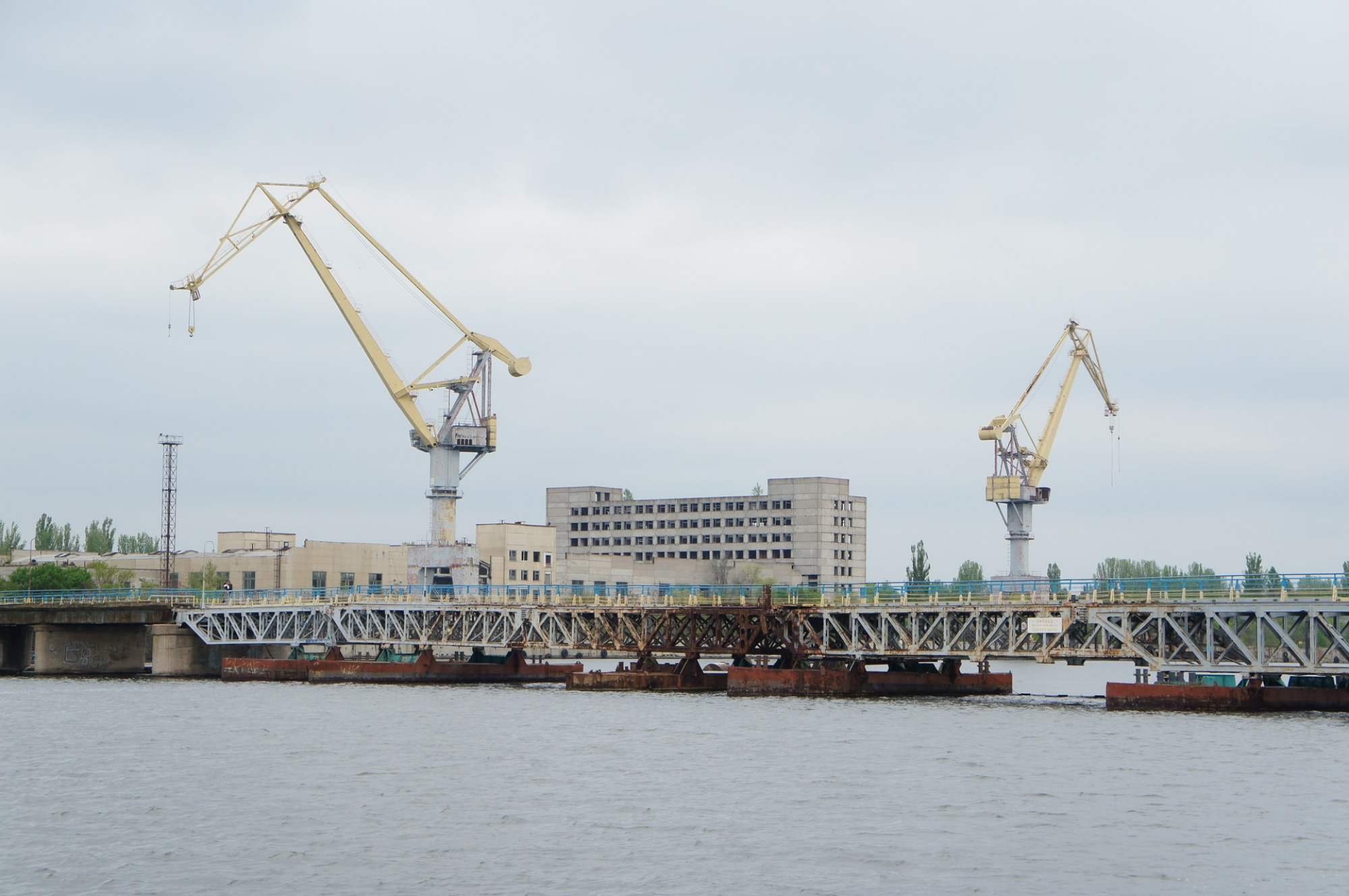 While I was writing this article, Russia was attacking Mykolayiv's Okean shipping plant, its seaport, and fuel storage facilities with missiles launched from Kherson. Since the very start of the full-scale Russian aggression against Ukraine, Mykolaiv has become a fortress that Russian troops have been unable to take.

The aggressor has chosen the tactic of psychological pressure on the citizens of Mykolaiv with the help of permanent missile strikes. Many infrastructure objects, civilian buildings, and private houses have been destroyed in the city.

In one month, the enemy destroyed a water supply line on the border of Mykolaiv and Kherson Oblasts. Repairing the line has proven impossible due to the fighting. The city was partially prepared for this scenario, as municipal authorities had started preparing water drills near hospitals. The oblast military-civil administration and the city government asked for help from the Ukrainian government, nearby cities, international organizations, and volunteers. The Ukrainian government approved financing for the project to restore water supplies to Mykolaiv, but completing the project took nearly one month. During that period, the population of Mykolaiv was supplied water out of truck-mounted water tanks . Odesa and Kropyvnytskyi supported Mykolaiv by providing these tanks. Mykolaivans received drinking water from almost every Ukrainian city, volunteers, and international funds and organizations such as UNICEF. Today, there is running water in Mykolaiv buildings and houses, but only for domestic needs. Drinking water is still a problem in our city.

Of course, the supply of water is only one of a huge array of massive everyday problems which the military-civil administration and the municipal authorities of Mykolaiv have been facing since the beginning of the Russian attack.

Mykolaiv authorities' day-to-day work is now concentrated on three main areas: humanitarian support, military assistance, and sustaining life in the city. With their humanitarian support work, municipal authorities supply water, food, and humanitarian assistance to the city's population. They also carry out evacuations of people from the city with municipal buses. City authorities provide shelter to people displaced by bombings, not only in Mykolaiv but from the whole region. After every bombing, special city workers help people to repair windows and roofs and assess damage to buildings.

In the first days of the war, Mykolaiv city authorities helped to build checkpoints, relocate military equipment, and provide our soldiers with water, food, and hygiene products.

Despite continuous missile strikes and the evacuation of a third of the city's residents, Mykolaiv remains alive as a city. Municipal services work. Trolleybuses, trams, and buses run through the city's streets. Garbage is swept and gathered. City administration offices are open and providing services and documents. City infrastructure and roads are kept operable.

Every one of us in Mykolaiv is fighting a personal battle as a part of the Ukrainian people's common struggle against Russian aggression. We all believe in our victory. The steadfastness of the Ukrainian spirit, backed by the financial and political-military assistance of our allies, allows Ukrainians and the entire Western world to look forward to a peaceful, democratic future.

It has become clear that democratic values such as human rights, respect for the dignity of the individual, freedom of speech, and the rule of law are important only when they are respected by all without exception. Russia, looking into the eyes of the entire democratic world, deceived and manipulated, laid waste to the principles of humanity and civilization, which for centuries have been developed and laid the foundation of modern Western civilization.

The insidiousness with which Russia's leader interprets his own distorted vision of historical progress is appalling. However, in the history of the wars of conquest which Russia has waged throughout its history, there are many evident examples of deception, brazen lies, and distortions of facts.

In his memoirs, the father of Finland, Carl Gustav Mannerheim, cites a demonstrative episode that simply stunned him as an officer and commander-in-chief. In September 1944, peace talks began between the Soviet Union and Finland. Mannerheim, via Stockholm, offered a cease fire on a day and time of Stalin's choosing. Stalin agreed, and Mannerheim ordered an end to all hostilities at 7 am on September 4. However, instead of silencing their guns at the appointed hour, the Soviets continued hostilities as if nothing had happened. A day later, immediately after 7 am on September 5, the Soviets ceased fire. Later, in response to this episode, Soviet Commissar for Foreign Affairs Vyacheslav Molotov explained that the Finns had stopped firing a day earlier than the Russians, and they (the Russians) had the custom and principle of presenting everything truthfully as it really was.

In our recent history, we have repeatedly been faced with Vladimir Putin's blatant and brazen lies. In 2014, Russia lied about not sending its army into Ukraine's Crimea and Donbas. Lies, manipulation, and misinformation underscore the style of policy that the Russian government is implementing today, both with regard to its own citizens and the international community.

To understand the need for Ukraine's victory in this war, our allies must pass a kind of civilization test. The answers to the questions of this test must contribute to the awareness of the threat to the future of every democratic country and of democracy as a system of governance.

Putin's success in his war against Ukraine would be a defeat for democracy.

In essence, this test is a challenge to which the Western world must find answers today, as the criminal war of the Russian president is approaching a decisive phase. The right answers to the challenges can ensure victory and turn the war into a historic opportunity to strengthen democracy and build a peaceful future.

1. Can Ukraine's allies, especially in the EU, not only preserve but also strengthen their unity and solidarity? As the war has accelerated the development of global energy, food and financial crises, will the coalition around Ukraine be able to avoid fatigue and remain focused on suppressing the cause, instead of merely trying to adapt to its symptoms and consequences?

2. Will Ukraine receive more modern and powerful weapons, in spite of Moscow's threats to strike against all stages of weapons supplies, including Russia's occasional nuclear saber-rattling? After all, the availability of modern weapons will enable the Ukrainian Armed Forces to not only withstand the enemy's offensive, but also to return the territories of Ukraine occupied by Russian troops.

3. Will NATO be able to overcome the resistance of Turkish President Recep Tayyip Erdogan to Finland and Sweden's applications for membership in the Alliance? NATO membership for these two northern European countries will emphasize the Alliance's ability to pursue an effective positive gaming policy. When there is cooperation between member states, awareness of common challenges and dangers is more beneficial than competition.

4. Will Ukraine be able to maximize its information campaign on the horrors, atrocities, and grief that Vladimir Putin's troops have brought to its land? With the help of facts and documented evidence, Ukraine must inform the world of Putin's personal responsibility for war crimes, looting, and the destruction of homes, schools and hospitals! Moreover, a powerful information campaign with the support of all the world's democratic media must break through the Kremlin's propaganda curtain and reach out to the Russian people to make them understand that the bloody war Putin started on their behalf is not in their best interest!

5. Can the United States, Britain, the EU, Canada, Japan, and other global allies strategically defeat Putin while continuing to financially and economically support Ukraine, while also weakening Russia's economy and stifling its military capabilities? Only the maximum economic weakening of Moscow will deprive it of the ability to wage a protracted war in Ukraine or to resume its aggression after a pause in the future! At the same time, the ability of NATO and its members to increase their defensive capabilities will increase the Alliance's effectiveness in deterring and preventing future threats.

The provisions of the test must be combined with the main understanding that Ukraine's unexpected resilience, ingenuity, patriotism, and courage have forced the free world not only to support Ukraine, but also to halt years of democratic erosion and authoritarian revival.

By uniting in a moment of danger, the Ukrainian nation is fighting for the right to live its own, independent life among free nations.

The fact that we have not faltered, testifies to our robust, persistent will. If we remain true to ourselves, unanimously and unwaveringly adhere to the values that underlie Ukraine's independence - inherited from our ancestors - faith, love for our Motherland, determination and unwavering will to defend their country - the Ukrainian people can look very optimistically towards the future.

Oleksandr Bereza
Deputy of the Mykolayiv City Council, Head of Administration of the Central District of Mykolayiv
Next article

What is going on at the Russian-controlled Zaporizhzhia NPP, what dangers does it entail?
PODCAST
September 10, 2019