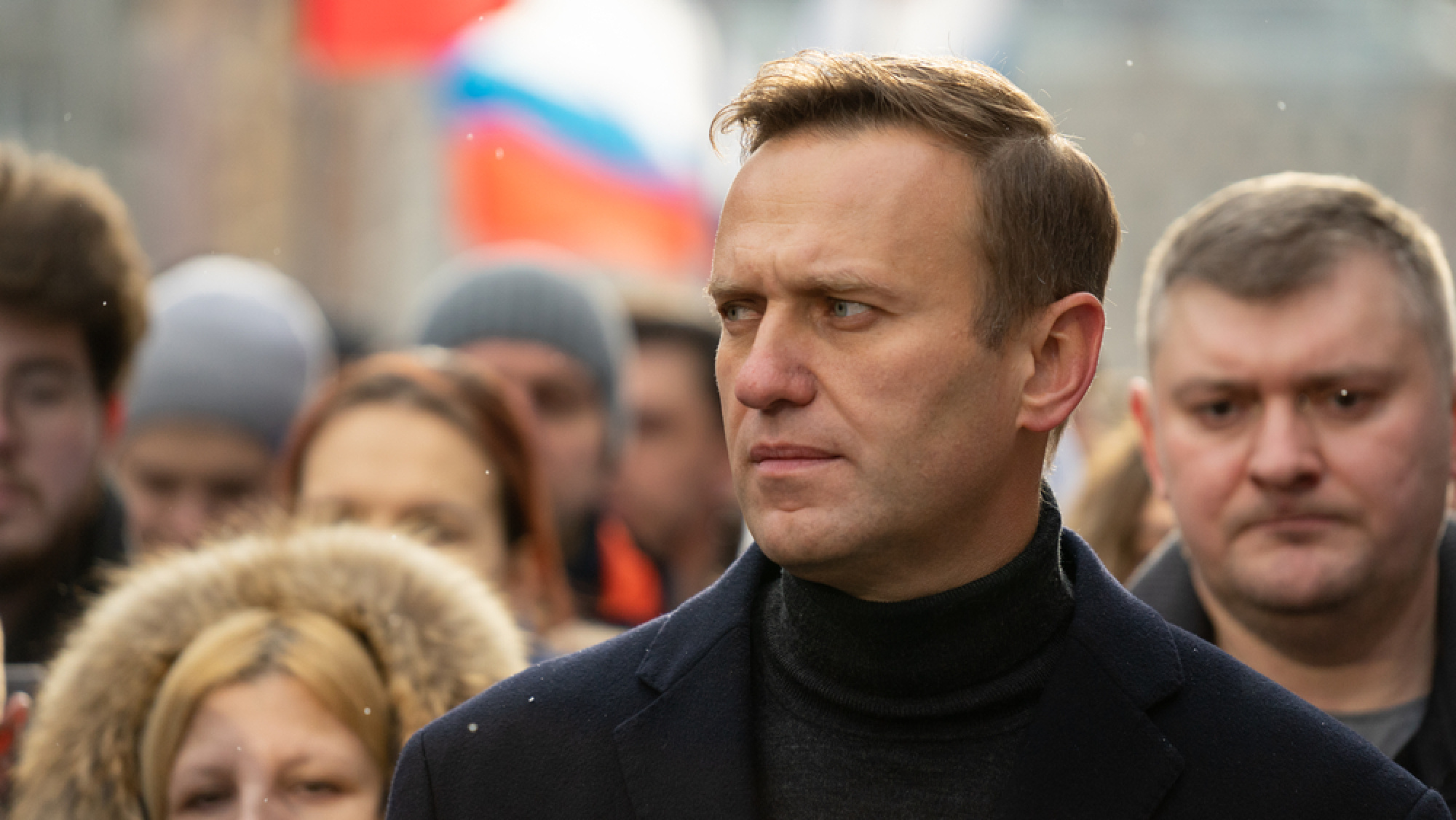 Although the protests in Russia against Putin's regime and poisoning and persecution of Russian opposition leader Alexei Navalny have been met with empathy among many democratic-thinking Ukrainians, they also have met a substantial level of mistrust.

The reasons for this mistrust lie not only in Navalny's earlier ambiguous statements about Ukraine, an in particular annexation of Crimea. They have deeper roots in the complicated history of Ukrainian-Russian relations.

This history gives Ukrainians several reasons to mistrust Russian "liberalism" or "Westernism". The key Ukrainian suspicion is that this "Westernism" is a mask for a new and modernized version of a Russian empire.

The key Ukrainian suspicion is that this "Westernism" is a mask for a new and modernized version of a Russian empire.

This Ukrainian suspicion has some basis in the Russian intellectual history. Liberal thought has been historically quite alien to Russian philosophical and political discussions. Russian "liberalism" was not born in the 17th, 18th or 19th centuries, and did not really even emerge in the early 20th century, despite numerous signs of a turn towards individualism in many European countries.

Russian intellectual culture did produce a big "personalist" philosophy from Nikolai Berdiaev, a Russian philosopher from Kyiv (now the capital of Ukraine) with his focus on philosophical, psychological and religious understandings of freedom. But even Berdiaev's philosophy (or similar Russian "personalisms" of the early 20th century) had little focus on the social, political and legal dimensions of human freedom. It remained in a philosophical and artistic ghetto.

Berdiaev was later justly criticized by Isaiah Berlin, the Riga-born influential British liberal thinker whose family left Russia in 1921. Berlin knew that the lack of a liberal vaccine can turn even Russian "Westernism" into a new type of dictatorship.

Things weren't better in the 19th century, either. I know of one big Ukrainian 19th century liberal, Mykhaylo Drahomanov, one of the icons of Ukrainian intellectual tradition; but I don't know any similarly powerful Russian liberal thinkers who exercised the same intellectual influence on Russian political thought as Drahomanov did for the Ukrainian one.

I know of one big Ukrainian 19th century liberal, Mykhaylo Drahomanov; but I don't know any similarly powerful Russian liberal thinkers of that time.

The big debate in the Russian 19th century was between religious and traditionalist "Slavophiles", who aspired to return to a pre-modern patriarchal and religious society, and anti-religious "Westerners" (socialists, nihilists and anarchists) who dreamed of a grandiose social revolution which would tear tsarism down.

But the problem of Russian "Westernism" is that it often imagined this radical modernization in a very authoritarian way - like the Marxist "dictatorship of proletariat", a collective tsar intended to replace the individual monarch.

In both "Slavophiles" and "Westerners" there was little space for individual freedom.

Instead, this individual freedom was the key focus of reflection for Ukrainian writer (with Russian origins) Maria Markovych, who wrote her texts under the male pseudonym of Marko Vovchok. Individual freedom is also a leitmotiv for another Ukrainian female writer, Lesya Ukrainka, who waged a double battle: not only for her national community against imperial domination, but also for the rights of the individual against the pressure of the national community.

While the history of Ukrainian "liberalism" (or "proto-liberalism") can be traced back to these 19th century writers, 17th century Cossack-centered society or early modern autonomous cities, Russian "liberalism" has little basis in Russian intellectual and cultural history.

While the history of Ukrainian "liberalism" (or "proto-liberalism") can be traced back to 19th or 17th century, Russian "liberalism" has little basis in Russian intellectual and cultural history.

When, in the 17th century, the first liberal political doctrines were developing in Britain (take John Locke's "Second Treatise on Government", for example), or when, in the same century, Ukrainian Cossacks ran their society with a certain level of pluralism of voices and rights, the Moscow Tsardom (and later the Russian empire) thought of itself as a centralized empire with minimal space for freedoms and "deviations". Even the "Westernization" practices by Peter I were too authoritarian and cruel to resemble any "liberal" approach.

When Europe saw the Age of Enlightenment in the 18th century, with its willingness to enlarge the space of rights and freedoms, at least to the tiers état (the bourgeoisie), in Russia "progressive" and "pro-Western" monarchs like Peter I and Catherine II were building an empire in which the centralized bureaucracy and the army destroyed national characteristics and space for grassroots initiative. In this political environment, no tiers état could emerge - which partially explains why Russian intellectual elite often showed so much contempt for  the local bourgeoisie, the meshchanstvo.

When, in the early 19th century, ideas of the French revolution were spreading across the European continent, "progressive" Tsar Aleksandr I built his image on the basis of his victory against Napoleon (and, in the end, against the French Revolution), while his successor Nicholas I poised himself as the saviour of Europe from all other subsequent "revolutions", and from modernity as such.

This explains, perhaps, why European travelers to the Russian Empire went through magical transformations. When French aristocrat Marquis de Custine traveled to the empire in 1839, yearning to find an antidote to the "Revolution" which killed his family, he left Russia with a clear understanding that it was not the monarchy he wanted to see. Instead of a monarchy with a carefully tailored plurality of rights (at least for the aristocracy), he saw a monarchy where nobody except the tsar had any rights at all, and where everybody except the tsar was a slave.

Finally, after almost a century of argument between "Slavophiles" and "Westerners", the "modernizing Westerners" won the battle in Russia in 1917. But instead of building a society of rights and freedoms, they built yet another authoritarian empire which killed millions of people without hesitation.

In the 20th century Russian "Westerners" (the bolsheviks) built yet another authoritarian empire which killed millions of people without hesitation.

This prompted Russian emigré writer (who himself was hardly a liberal) Dmitriy Merezhkovsky to say that, paradoxically, the most horrible Russian authoritarianisms were born from Western ideas of modernity.

There is a danger that Russian "liberalism" will sooner or later find itself embracing the "strong hand", "order" and finally samoderzhavie, authoritarianism - or at least some kind of a modernized empire.

There is a danger that Russian "liberalism" will find itself embracing the "strong hand", "order" and authoritarianism - or at least some kind of a modernized empire.

This might be a hidden reason why Mr Navalny was compelled to say that "Crimea is not a sandwich," hinting that he would be reluctant to give the occupied peninsula back to Ukrainians if he became president. Moreover, Russian liberals have a long tradition of thinking about Ukraine as a "better version of Russia" - or perhaps even "worse version of Russia" - but in any event a "version of Russia" - a thought which Ukrainians see as a soft attempt to prepare a subsequent invasion, or at least, assimilation.

The long history of relations with Russian "Westernization" shows Ukrainians that this "Westernization" often only adapts to new economic, social or technological realities, but then rebuilds an authoritarian empire under a new, "progressive" mask. Ukrainians have much experience in the past to have this concern.

Russian "Westernization" often only adapts to new economic, social or technological realities, but then rebuilds an authoritarian empire under a new, "progressive" mask.

Isn't that good reason to have a healthy level of skepticism and mistrust?

On March 4 the Ukrainian Parliament sacked the government of Oleksiy Honcharuk, and voted in favor of appointing a new prime minister, Denys Shmyhal. Many ministers...
PODCAST
October 16, 2020

Following last week's EU-Ukraine summit, UkraineWorld discusses what is happening in Ukraine's EU integration under the presidency of Volodymyr Zelensky. Are reforms...