April 14, 2022
Kyiv oblast, the village of Fenevychi. Horrors of the war and Russian occupation. Testimony of a witness in a form of a war diary. 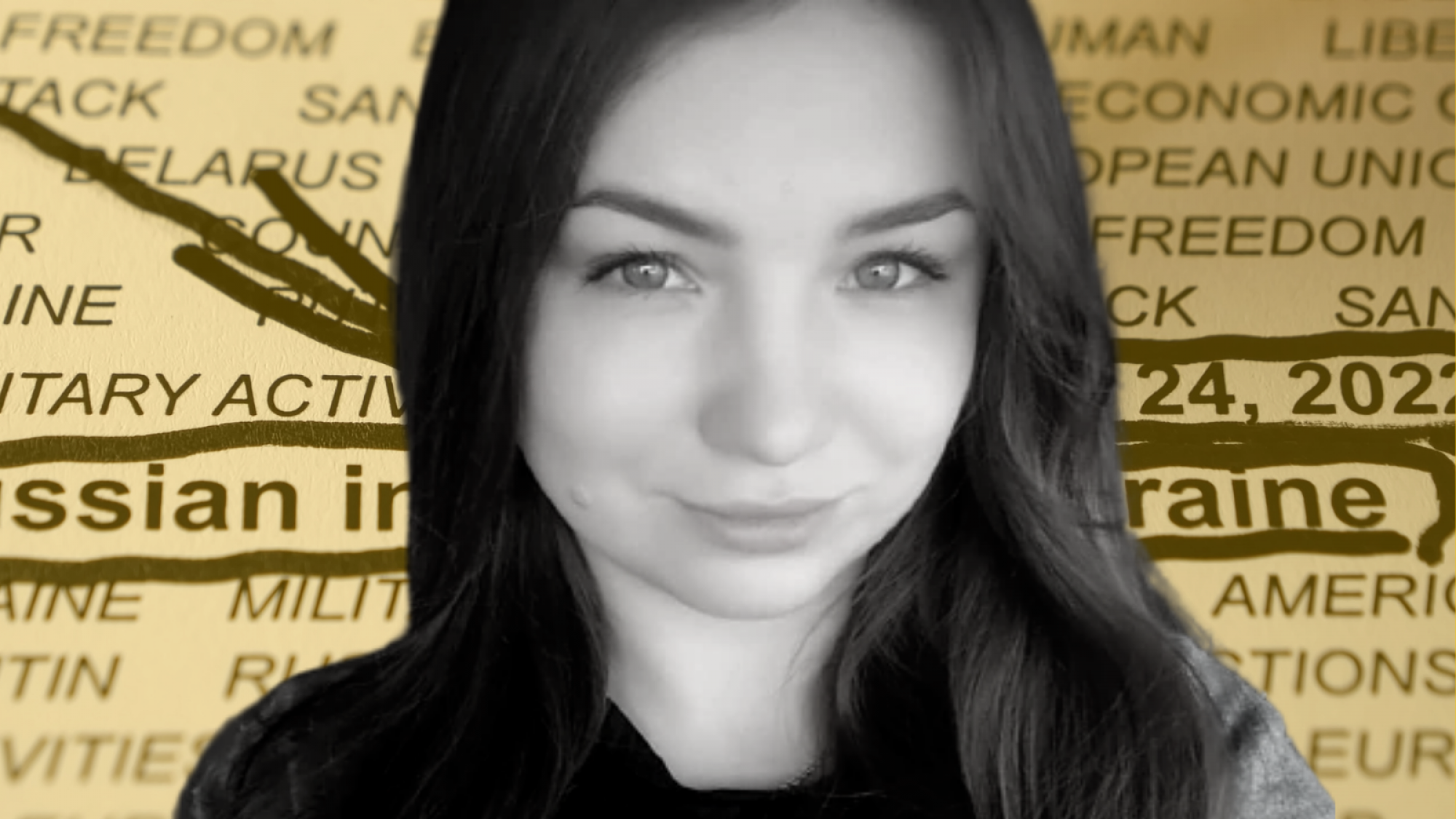 This is the story of Bohdana, a girl who, together with her family, lived through the Russian occupation of the village of Fenevychi in Kyiv Oblast. She kept a diary, starting February 24th until the day her village was freed, in which she described what she saw and felt.

We managed to make it to my parents' house. Thank God! It's quiet here. Helicopters and airplanes fly by every now and then. I saw with my own eyes an enemy plane shot down. It was wild and strange. I had never seen anything like it.... and would rather not have seen it.

Enemy aircraft. Waves of military equipment that are heading towards Kyiv. Tank salvos. Volleys of gunfire. Can this really be our reality?

The columns of military equipment are again going to Kyiv. We are frightened. We pray like we have never prayed before. They shot two people outside the village. Just like that. Because they were Ukrainians?

We have learned to discern by sound how far away and in what direction the shooting is. It's similar with the type of weapons and planes that are flying above us. Even children have learned. This shouldn't happen in a normal world.

A house was burned down on the edge of the village. Several people were injured. But people are even more united!

We broke the lock in our neighbors cellar — fixed ourselves a bunker. We trust they'll understand. We are saving our own lives. Here in the bunker, I dream that there is no war, that I am at work and everything is alright. I wake up crying. I want my life back.

Some of our guys spilled all the oil out of one of their fuel trucks. I'm proud of them! The marauders robbed a roadside café, filled themselves with spoiled, unrefrigerated sausage, and destroyed the stop and everything around it. They burned down the café out of pure evil. In this instance you could see the whole substance of their internal world. It's too bad about the café... it was nice. But we will build another one! I am confident! It is good to know that the only thing the occupier can do on our land is shit!

War. There is so much within these three letters. I never even thought that in our own time there could be such cruelty. This period has changed us forever. I have begun to understand my grandmother, who never went to watch the fireworks, because they reminded her of war. Before, I was against fireworks in solidarity with those who protect us, who have lived through some of the fiercest fights, but now I will have my own reasons. Now my own home has become a war zone.

The occupiers came with offers of food and medicine for the population. Russian Warship, go fuck yourself!

The occupiers are bringing what they've stolen from Ukrainian stores and calling it humanitarian aid. They attack nuclear power plants. They shoot families without warning. They destroy cities, villages, and people's lives. I dream of the time when they will leave here. Or rather, not leave, but lie in the ground.

We bought two sacks of wheat in case we run out of flour. It is possible we will run out, as the occupiers have made their checkpoints, dug in their tanks, and say that they are here not for one day... and not for two...

I want my life back. I really want it. Water, internet, and most of all peace and quiet! When you arrive at the village in the morning and hear only the neighbor's dog barking, or the neighbors getting a head start planting their potatoes. I am tired of hearing explosions and learning of yet more death and destruction.

Today is March 8th. The holiday feels a little strange. In truth, I truly love holidays! Even the small ones! But not today...We baked bread from the flour that I ground. It came out alright!

Today I was baking bread again from the flour that I made. Our neighbors tried the bread and went searching for wheat. I am no longer the only one making flour. I imagine that this will help us all survive.

Today the Russians were distributing what they have stolen from our land. The pensioners took some. The Russians film this on camera to show on their TV stations. They would be better off showing the girl who died in Mariupol today because she wanted to get a drink. Her death is on the conscience of every Russian. Such bloodiness will not be washed off for generations.

Many of us are losing hope that we will be freed. It is scary to become a second LDPR (Luhansk and Donetsk People's Republics). They have lived for eight years how we have lived for three weeks. We live without light, taking water only from the well; we cannot even light a candle - they could blow up your home for having a light in the window, and you along with it.

The neighbors' children thought up a game called "Beat Putin". It is an honor to beat Putin! No one wants to be Putin, so they assign some object to be Putin and beat it until their knuckles are bloodied. With a hatred that children should not have.

We are tired. Physically and morally. The occupiers assert that they are about to win. They say that we need to be patient and we will have our Russian Peace. This is what we fear the most.

Today, those who laughed at how I purchase seeds are already taking what remains from the stores. Those who laughed at how I made flour are digging out their last sacks of wheat. People are preparing for a lengthy occupation. We are learning to churn our own butter, to bake bread, and to appreciate life and the people close to us. We have become more sincere - we are Ukraine.

The occupiers figured out where our people were going to call their loved ones and banned us from going there. They want to place us in an information vacuum, to cut off our connection to the world.

In general, it seems to me that I could already write a book about all this. There will be a war cookbook, how to treat the sick in the absence of medications, how to organize a shelter, how to store food without a refrigerator, and much more. And only 20 days have passed!

Today was sunny, and the sky was clear as can be! Who would have thought that you could bomb the people of Mariupol from such a sky. Who would have said that such death can hide among the stars.

The FSB has come for a second time, looking for representatives of the police or ATO (those who served in Donbas). They took some people. Some are being prosecuted as if they are criminals.

People have gotten so used to explosions in the district that they don't even pay attention to them. Someone says that this will last between two months to two years. I don't want to believe that. The world averts their eyes as Ukraine dies.

The occupiers are demanding of us prostitutes, weed, chicken, and milk. Young girls try not to leave the house alone if they can avoid it. As a whole, since the start of the war women of all ages try to look less bright or presentable. I personally have forgotten what makeup is, and I try to pull my hat down low over my eyes. It's terrifying.

The bridge between us and Katyuzhanka was blown up today after lunch. They are running away! I saw from afar how hundreds of units of military vehicles were taking away what they had stolen. They are taking all that they can. Mopeds, dressers, cars, machines. Anything that you can fit in a military car. They have been going non stop since March 26th.

Every day without the Russian Fascists it becomes easier to breathe, although in the air you can still smell gunpowder. The sky is better without the cruise missiles. And the stars are more visible without the drones.

We are free! My dream has come true! Our soldiers have arrived, and they say that everything will be ok. The roads are mined. There is a lot of work to do, but the most important thing is that we are free! It means that the war will be over soon. It will never be like it was before. It probably shouldn't be. Even though you can still hear the gunfire at night, it has nonetheless become easier to sleep.

We have new neighbors, although I imagine that they will not be here long. The Ukrainian Armed Forces. People cried when they saw them. I believed that it would be so. It ought to be this way. This is our land. Our forces are from here. Everything will be Ukraine!

“Friendship Has no Limits:” Is China Helping Russia in the Information War?

Economic pressure might be the key way to force Russia to stop its aggression against foreign countries. But it is not working in full as it was planned to. Numerous...
PODCAST
January 25, 2022