October 6, 2022
The story of Anna, who fled the war with her two cats. #UkraineWorldTestimony 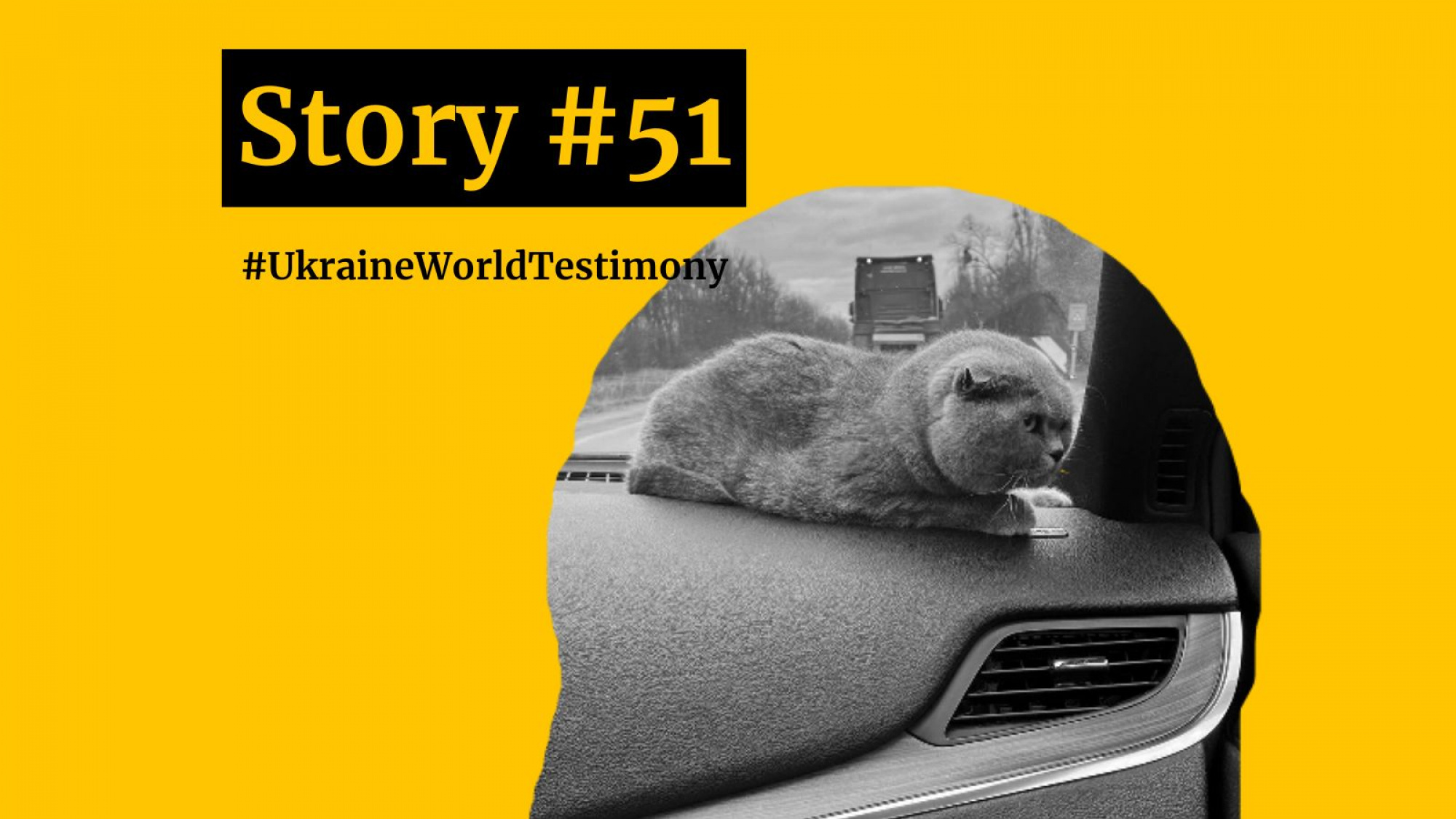 February 24, 2022 was a dark day in the history of Ukraine. Russia, an aggressor country, attacked us. They wanted to take everything from us — our territory, our language, our history, our culture, our lives.

The realization of this tragedy did not come to me immediately. I remember my brother's call in the morning: "Anya, wake up, the war has started. Get ready quickly, we'll pick you up." But no one could go anywhere.

The traffic jams in the first days were terrible, and we decided to wait. 10 days of living in a corridor, without sleep and almost without food. I simply had no strength to force myself to eat. Hastily taped windows, a mattress in the corridor, mirrors and shelves removed. We were constantly running with our two cats to and from the basement. Constant messages to family and friends. An incredible fear of not getting an answer.

Nights were the scariest. The shooting didn't stop, all the explosions sounded as if they were nearby. Irpin and Bucha were actually not far from us. I was saying goodbye to my life. I just accepted that this could be my end.

I was not so afraid that something would fly into my house, but rather that strangers would break in here. And when someone knocked on my apartment door one day, I burst into tears because I thought it was Russians. But it was our neighbors, and they brought us food.

My husband and I thought for a long time about whether or not to stay. I realized that if we stayed, I would lose my mind. It was easier for me to die trying to leave than to wait for death at home. And we took the risk. Our friends took us and our cats with them. We spent the next 3 days on the road.

While we were packing, my sweet kitty was looking at us and meowing pitifully. As if she felt something was wrong, or was afraid that we would leave her. My cats Lully and Duffy are my children. I was worried for them, maybe more than for myself.

Duffy sat quietly in the carrier the whole way. I kept checking on her and was scared that she didn't even meow once. It seemed to me that her little heart could not take the stress. Lully, on the contrary, was constantly trying to get out of the backpack. She was more comfortable sitting in my arms or on the car dashboard.

During the entire journey, my cats did not ask to go to the toilet or eat. We tried to at least give them a drink, but in vain. I think they were so stressed that they didn't want anything. The first time we stopped for the night, the cats slept together, which had never happened before. They stopped fighting for a while, as if they understood that they needed to stick together.

The road was hard and dangerous. We didn't know where we were going and we were almost out of money.

We took the risk of leaving on the Obukhiv highway. Past corpses on the roadside, anti-tank hedgehogs, a bunch of territorial defense checkpoints. We spent the first night in Kyiv Region. We were fed hot food. For the first time I was able to sleep in quiet. Nothing was exploding around us, but the feeling of not being safe still remained.

The next day, we were planning to go to Vinnytsia to our friends. We were delayed because there were heavy traffic jams and a lack of gasoline at gas stations. We were worried, but it's good that it happened that way. At the time when we were supposed to approach Vinnytsia according to the schedule, the Vinnytsia airport began to be bombed. We took it as a sign and changed our route.

In the end, our friends who live in Canada offered us to stay with their parents in a village in Ivano-Frankivsk Region. It was our salvation.

What Do Ukraine’s Counterattacks Mean to the Geopolitical Landscape?

How Has the War Affected the Medical Procurement in Ukraine?

How has the war affected the medical procurement process and procedures? UkraineWorld spoke to Edem Adamanov, acting general manager of Medical Procurement of Ukraine...
PODCAST
December 20, 2021