Fighting Disease During the War: a Story of a Cancer Patient

The Second Front: How Ukrainians Are Fighting Cancer During The War 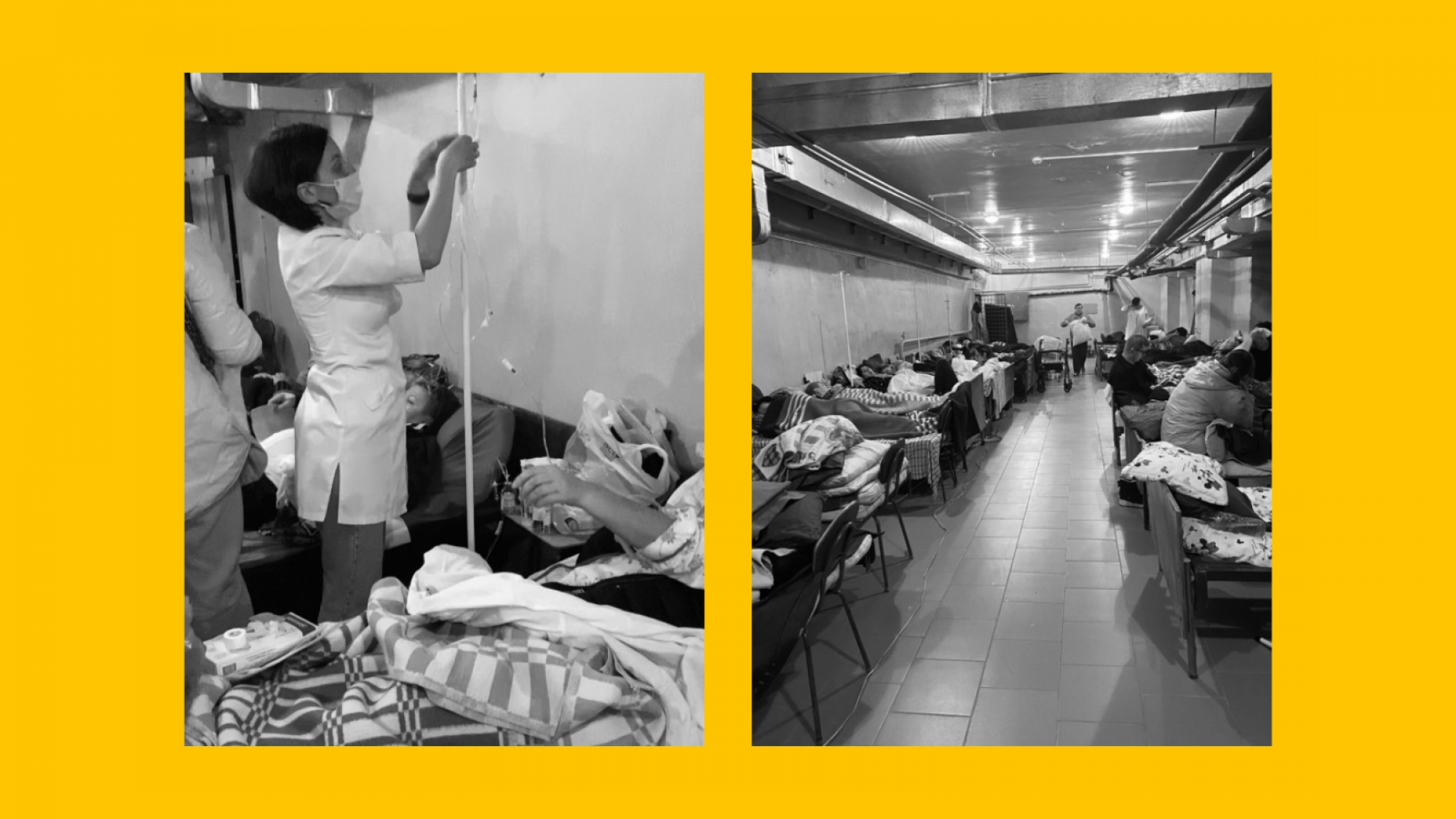 At the beginning of the Russia's full-scale military invasion of Ukraine, the Kyiv City Clinical Oncology Center had more than 40 bedridden patients who needed constant care and supervision.

52-year-old Maria from Odesa region was among them. On February 21, she underwent a planned laparotomy (a surgical incision into the abdominal cavity - ed.). Her daughter Anna was beside her mother all the time. The war caught their family off-guard right in the oncology center.

"As a family doctor myself I always monitored my mother's health — she underwent routine medical check-ups. During one of them the ovarian cysts were found. The tumor marker tests were normal as well as the DCE-MRI. But I still had doubts. We made a decision to go to Kyiv to consult a gynecologic oncologist Kateryna Kharchenko. There my mother went through the first surgery, the diagnostic one," Anna told.

This surgery had confirmed Anna's fears: her mother Maria was diagnosed with ovarian cancer. The next surgery, laparotomy, was appointed at once but it was rescheduled three times.

"My mother was not ready to face her diagnosis. She was extremely stressed out. The first time the surgery was cancelled because of tachycardia: doctors were unable to stop it. Ancillary cardiac tests did not detect any heart pathology — my mother just took it too hard," Anna recalls.

The second attempt to get Maria operated on also failed: on the eve of the appointed date she had a virus infection and the laparotomy was postponed again. Maria finally had her surgery on Monday, February 21, three days before the full-scale war started.

On the morning of February 24, for safety reasons, patients at the Kyiv Oncology Center were moved from the upper floors to the lower ones. "Cot-cases" were the first ones to found themselves in the bomb shelters. But just in a day all patients were evacuated there.

There are several bunkers in the Kyiv Oncology Center. During the first weeks of the war one of them was headed by the oncogynecologist Kateryna Kharchenko.

"We decided to evacuate all patients to the bomb shelters on the night of February 25, when the battle for Hostomel airport continued. We heard everything (the oncology center is located on Verkhovyna Street, in the direction of the fiercest fighting at the beginning of the war in the Kyiv region — ed.), and began the evacuation at 4 am.

Within two hours, all patients were transferred to the bunkers. In the first bunker, where I was, there were only bedridden patients, about 20 of them. We had everything we needed. If there was a need for medicines or medical supplies, our nurses brought them from the upper floors. They went there to sterilize instruments as well," the doctor recollects.

My mother and I were sent to the bomb shelter on February 24. She felt bad, she was constantly feeling nauseated. I decided to stay with her. My husband returned to Odesa to evacuate our 11-month-old baby from there," says Anna.

She recalls: at first it was very terrifying. It seemed that we had to wait only for a few hours - and it would be over. But very quickly we started to feel ourselves secure and safe.

"The support of the medical staff was impressive - they were all there with us. By evening, they brought heaters to the bomb shelter, toilets were working, there was hot and cold water, the staff was constantly cleaning, they even hung up the TV, - Anna is surprised.

All patients received the necessary care, medication, nutrition, doctors' attention. If there was a problem, it was solved immediately. Everyone worked together; there was a feeling that we were one family."

Patients and doctors spent about two weeks in the bomb shelter under the oncology center - until the last patient was discharged.

"Maybe, everything was supposed to happen that way," Anna thinks. - Due to the emergency situation, mothers and other patients had recuperated 3-4 times faster. All of them were mostly focused on recovering from surgery and going home. My mother soon increased her appetite, the wound healed; she got out of bed and even went outside when there were no air raid alarms."

"At first, the patients did not feel themselves very well in the bunker. It was hard to get used to. Both male and female patients were bedridden in the same room. There was even the situation when one of our severe patients, while she began getting very ill, took the hand of a man, whose cot was next to hers. He understood everything and held her hand. It was very touching," says the doctor.

Once all "pre-war" patients left the hospital, the Kyiv City Clinical Oncology Center did not admit new patients and plan elective operations for a long time. Patients continued to receive chemotherapy and ambulatory surgeries.

After discharge, Maria and her daughter returned to Odesa, although the trip back home was dangerous. The post-surgery recovery took place in the familiar environment, in constant contact with the doctor.

"Today we have completed the fourth cycle of the chemotherapy. According to the cancer treatment protocol, there should be six of them. At first we "dripped" in Odesa, but when Kateryna Volodymyrivna [Kharchenko] returned to Kyiv, we went there immediately. My mother puts a full trust in the specialists of the oncology center, Kateryna Volodymyrivna, the chemotherapist - this is very important for her recovery. Triple stress - from diagnosis, surgery and war - forced us to seek help from a psychotherapist. Now my mother is taking antidepressants, and finally got her old self back," Anna shares.

"I have been asked many times: why don't we go abroad for treatment? But we don't want to. We believe that we will not have to leave our home (Maria and Anna now live together in a village on the border with Moldova - ed.), we will not go anywhere; we want to complete treatment here in Ukraine, at home," - says Anna confidently.

In April 2022, the Kyiv Oncology Center completely resumed its work.

"I perform 10-12 surgeries a week. My specialization is oncogynecology. Nowadays in most cases we operate on advanced ovarian cancer: the surgery can take up to 8-10 hours. I have all the necessary medicines, medical supplies, blood products, no restrictions, we provide all the help as before the war," says Kateryna Kharchenko.

However, something has changed. The doctor notices: her colleagues perform the operation splendidly, while patients do not waste their time on the minor issues, everyone is focused on the main goal of cancer full recovery.

"Despite the difficulties, I am extremely pleased to understand that I am home doing my favorite thing," - admits Kateryna Kharchenko.

Despite the war in Ukraine, the public procurement of medicines for the seriously ill patients' treatment did not stop. Each patient can check the availability of medication and receive it free of charge. More than 80 drugs for the cancer treatment are purchased at public expense. The international partners deliver the medicines on the bases of the humanitarian aid. Under the Healthcare Guarantee Program patients are provided with drugs from the State Register of Medicines of Ukraine as well. These are mostly supportive drugs or the premedication before the chemotherapy. In addition to medicines, patients can continue to receive free medical care, regardless of place of residence or registration.

Story #48. Child Birth During the War

Read a new issue of bi-weekly newsletter with monitoring of Russian activities and influence in Belarus to know more.
VIDEO
October 31, 2022