What The World Should Know About The Ukrainian Prisoners Of The Kremlin, And Why

October 28, 2020
Despite a lack of media coverage, more than 100 Ukrainians are being illegally held as prisoners in Crimea and the Russian Federation, with hundreds more held captive in occupied Donbas. Here is what you need to know about the Ukrainians illegally imprisoned for “espionage”, “terrorism” and “sabotage” in Russia and the occupied territories. 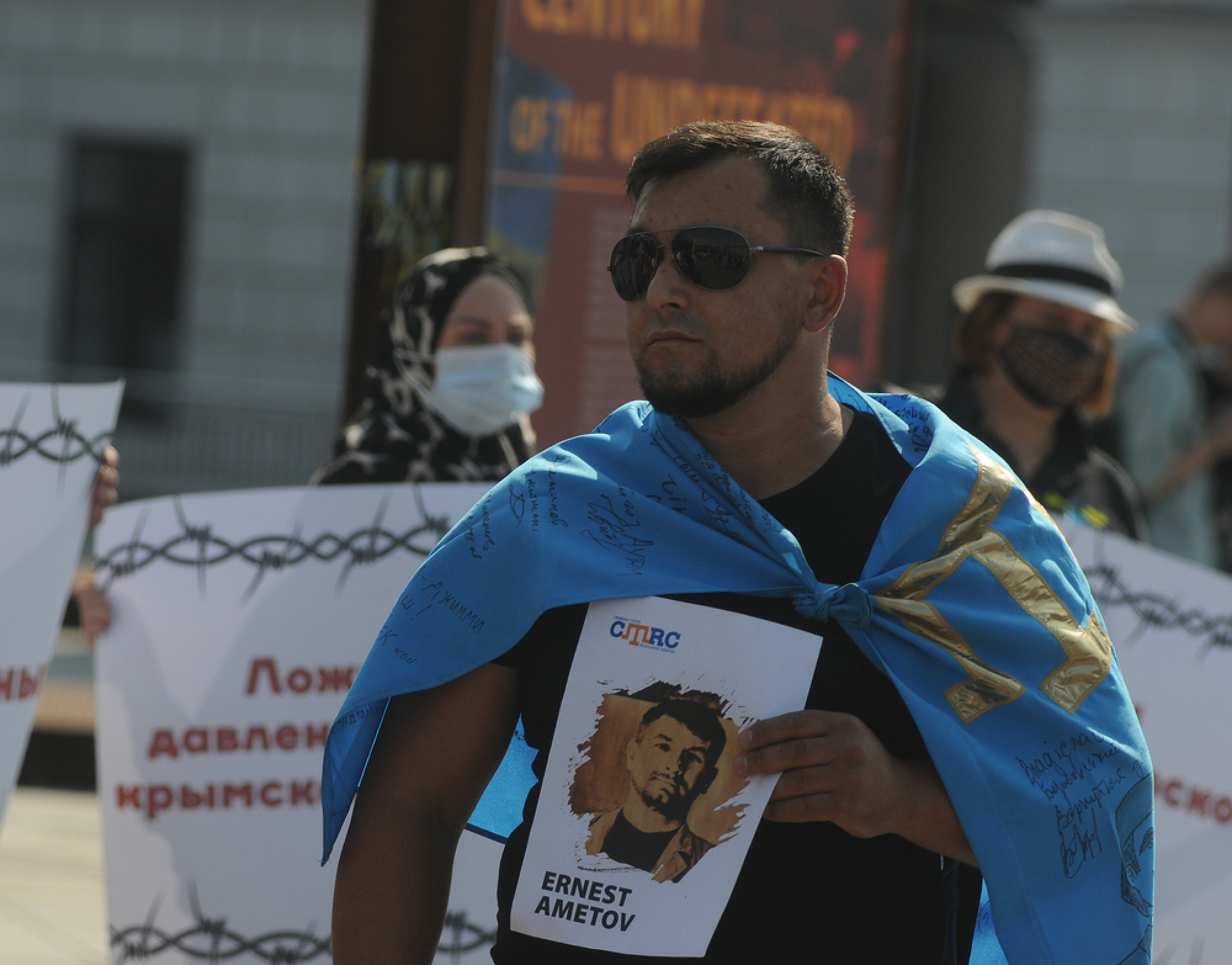 In mid-September, Russia's Southern District Military Court in Rostov-on-Don handed down its verdict in the so-called second Bakhchisaray Hizb ut-Tahrir trial. According to the NGO Crimean Solidarity, Russia sentenced Crimean Tatars Marlena Asanova, Memet Belyalov, Timur Ibragimov, Seyran Saliyev, Server Mustafayev, Server Zekiryaev and Edem Smailov to 19, 18, 17, 16, 14, 13 and 13 years in prison, respectively. As has happened to many other Crimean Tatars, all of them were falsely accused of organizing a branch of Hizb ut-Tahrir, an organization that has been declared an illegal terrorist entity in Russia and occupied Crimea.

"Terrorism and Server are mutually exclusive", Venera Mustafayeva, the mother of human rights defender Server Mustafayev said in an interveiw with the global campaign Prisoners Voice. Her son, who is recognized as a prisoner of conscience and a political prisoner by Amnesty International, was a coordinator of the Crimean Solidarity public association. He helped relatives of illegally imprisoned Crimean Tatars, attended and documented court hearings, and informed the world of what was happening in Crimea. In May 2018, Russian occupation authorities accused Mustafayev of "terrorism" and "an attempt to seize power by force".

As Chairwoman of the NGO Center for Civil Liberties, Oleksandra Matviychuk told UkraineWorld, there have been no incidents of Hizb ut-Tahrir planning any violent actions, or even any evidence of such activities. Moreover, there is no proof that the Crimean Tatars who were arrested even belong to this organization. The "terrorist" designation is widely used to mark Crimean Tatars who stand against Russia's occupation, Matviychuk explains.

The cases as of Server Mustafayev, Yashar Muedinov and other Kremlin hostages show how Russian occupation authorities deal with human rights defenders and journalists many of whom left the peninsula after the annexation, Matviychuk explains to the #PrisonersVoiceproject. Since the Russian occupation began, locals and relatives of political prisoners who have united their efforts under the Crimean Solidarity organization have become a primary target for repression.

"When they were taking my husband away, my four-year-old daughter asked where he was going. Riza replied that he would go far, far away to work, earn a lot of money and return home", she recalled. "And when we left the house, one of the FSB officers returned to the child and said: 'We are taking your father to prison. You will never see him again.'" Riza Izetov faces up to 20 years in prison, and is currently being held in Simferopol Detention Centre №1. 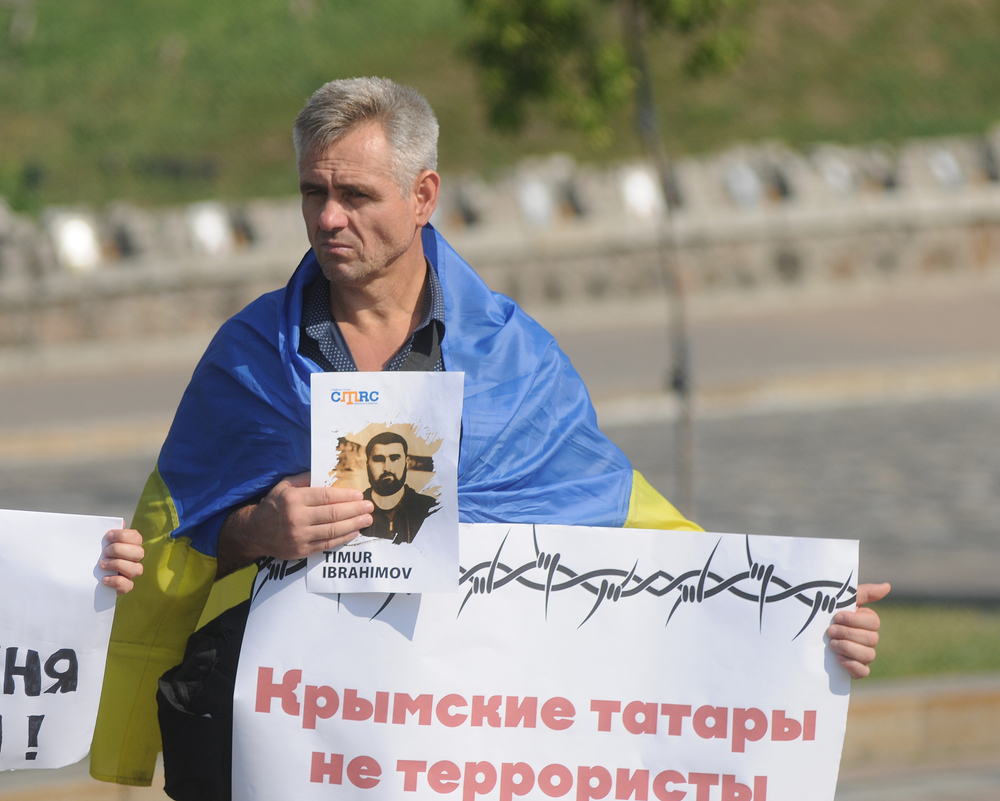 "Crimean Tatars are not terrorists": Participant of the action to support political prisoners of the Bakhchisarai case "Hizb ut-Tahrir". Shutterstock.com

"Our men are not terrorists. This is just a 'label' that they try to give to people who express themselves in life at all and are active," said Aliye Mamutova, wife of political prisoner Enver Mamutov. Mamutov is another detainee in the so-called second Bakhchisaray Hizb ut-Tahrir Trial. Before his arrest, he had organized holidays and parties for children in Crimea. Sentenced to 17 years in prison, Enver Mamutov was transferred to Penal Colony 1 in Stavropol, Russia.

However, in addition to the targeted oppression of Crimean Tatars, many people have been detained because they appear "in the wrong place at the wrong time", according to human rights defender Oleksandra Matviychuk. For example, Andriy Zakhtey, a former taxi driver who transported tourists around Crimea and also worked as a construction worker in Moscow, was detained in the case of the so-called "Ukrainian saboteurs". He was sentenced to 6 years and 6 months in a penal colony for allegedly preparing terrorist attacks at tourist and social infrastructure sites in Crimea in 2016. Ihor Kiyashko, a lawyer from Poltava who was convicted by the Russian Federation for alleged "espionage on behalf of Ukraine", who was sentenced to 8 years in a maximum security prison.

In addition to the targeted oppression of Crimean Tatars, many people have been detained because they appear "in the wrong place at the wrong time"

"The problem with this persecution is that there is no algorithm on how to behave in order to be safe", Matviychuk explains. "You can be detained on political motives because the regime has decided to show [the existence of] more spies and gangsters from Ukraine in order to create this image of an enemy".

To better understand what the Ukrainian hostages of the Kremlin go through, Internews Ukraine launched the #PrisonersVoice project. In an augmented reality mobile application, former political prisoners of the Kremlin Oleg Sentsov, Oleksandr Kolchenko and Volodymyr Balukh, who were released last year, share their stories of detention and illegal imprisonment.

Despite their cases being falsified, the torture and maltreatment of Ukrainian political prisoners is very real. Kiyashko's wife Maryna learnt how her husband had been beaten and tortured during his imprisonment. "He was beaten so that he lost consciousness, but he was then doused with water and beaten again", she recalled. His tormentors placed his head in  a narrow iron helmet, which made it difficult to breathe and move. "And he had to stand in this helmet all day. Ihor is tall and broad-shouldered, and it was very difficult for him to endure all this", Maryna added. In prison, Kiyashko was diagnosed with thrombophlebitis. Many other political prisoners,  including human rights activists Eldar Kantimirov, also had their health problems aggravated.

"No one there provides any preventative care, examinations or treatment to prisoners", Kantimirov's wife Elvina told the volunteers of Prisoners Voice. Psychological pressure, oxygen deprivation, lack of sunlight, and poor nutrition add to the problem. "From [Eldar's] lawyer, we learned that his cell had not been heated for several months in the winter, and it was very cold."

Torture and inhumane conditions are especially harsh for people being illegally held captive in the basements of occupied Donbas.

Torture and inhumane conditions are especially harsh for people being illegally held captive in the basements of occupied Donbas. This is a separate category of illegally-imprisoned Ukrainians, mostly civilian hostages, whose exact numbers are unknown.Oleksandra Matviychuk says there are at least several hundred people held hostage in the occupied part of Donbas.

Musician Valery Matyushenko is one of them. He was detained in 2017 in Komsomolsk and sentenced to 10 years in jail for espionage. He was severely tortured in detention. Prisoners who had been freed told his wife Tetyana that Valery was electrocuted and had broken ribs. "He is pro-Ukrainian, and he will never change it", she said. With his poor health, relatives suspect he might have cancer. 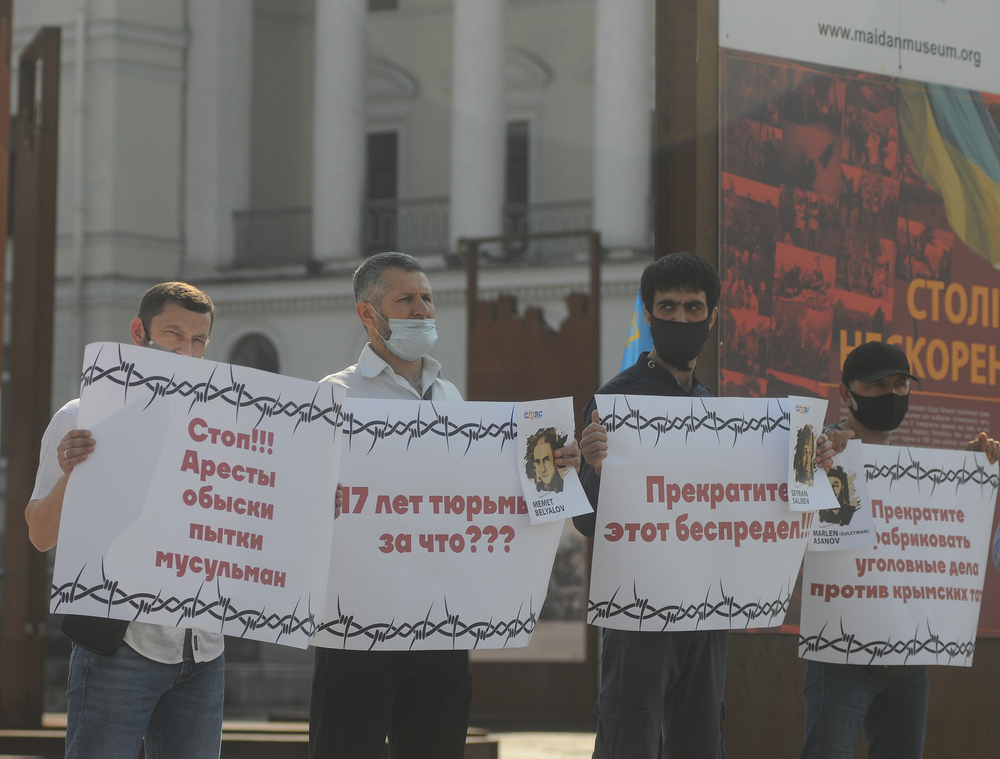 The human rights defenders at the Prisoners Voice campaign have documented dozens of cases of rape and torture. Even beyond the most graphic examples, Oleksandra Matviychuk reports that the conditions of captivity themselvesamount to torture. The issue has been amplified by the threat of the COVID-19 disease, both for political prisoners in the annexed Crimea and Russia, and for the hostages in the occupied territory of Donbas, which is now impossible to reach due to the closure of checkpoints.

ACTIONS DURING THE PANDEMIC

During the pandemic, prisoners' relatives and human rights defenders are especially in need of public awareness and support to protect Ukrainian political prisoners from the coronavirus. The Center for Civil Liberties has therefore launched a petition calling upon international organizations and their member-states to take action to help save the lives of thousands of illegally imprisoned people in Ukraine's occupied territories and in Russia.

While their loved ones hope for the next prisoner exchange, vague responses from Ukrainian officials leave them with no clear understanding of when it could happen.

While their loved ones hope for the next prisoner exchange, vague responses from Ukrainian officials leave them with no clear understanding of when it could happen. "We just need a lot of support from journalists, from our government, so that it keeps its promises", Maryna Kiashko urges.

With the hundreds of names that have been under the media's radar, the global campaign for the release of Ukrainian prisoners of the Kremlin is even more challenging. But the struggle continues.

IRYNA MATVIYISHYN
journalist at Internews Ukraine and UkraineWorld
Next article

A letter of a widow.
Russian Aggression
August 1, 2019

On July 12, an Italian court sentenced former Ukrainian National Guard soldier Vitaliy Markiv to twenty-four years in prison for his role in the murder of Italian...