Symbolic expansion: how Putin annexes history, not only territories

May 30, 2017
On May 29th, in Versailles, during a joint press conference with French president Emmanuel Macron, Russian leader Vladimir Putin said that relations between France and Russia have deep historical roots, referring to Anne de Kiev, a French queen, and calling her “Russian Anna”. He also said that she was a “daughter of our grand prince Yaroslav the Wise”. 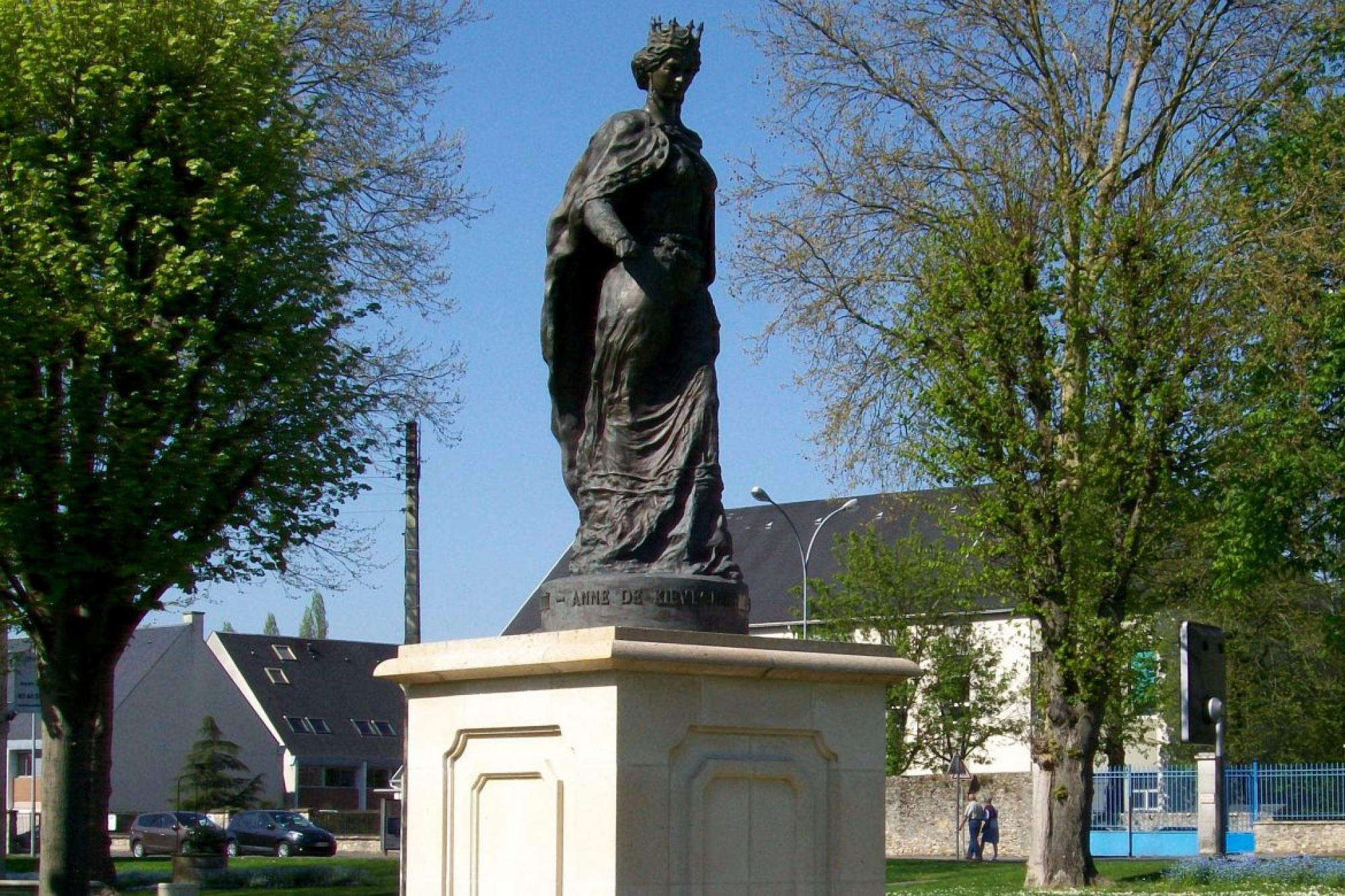 Photo credit: A monument to Anne de Kiev in France’s Senlis. It was created in 2005 by Mykola and Valentyn Znoba, famous Ukrainian architechts.

Yet, neither Anna, nor Yaroslav have any direct link to today's Russia. Both of them have relation to Kyiv, the capital of today's Ukraine. In 11thcentury Kyiv was a capital of a medieval state that gave birth to at least three contemporary Eastern European countries, and on which Russia now tries to impose its historical "ownership".

Anne de Kiev, a French queen who married king Henri I of France, mother of Philippe I of France, was born and raised in Kyiv in early 11th century. She, indeed, was daughter of grand prince Yaroslav the Wise, one of key leaders of medieval Kievan Rus, a state comprising parts of today's Ukraine, Belarus and Russia. Kievan Rus was at its most glorious times during the rule of Yaroslav, son of grand prince Volodymyr who brought Christianity to this part of Eastern Europe.

Putin's reference to Anne and Yaroslav as "Russian" matches his earlier attempts to interpret Eastern European medieval history in exclusively Russian terms. This has clear geopolitical implications as earlier Putin "justified" Russian annexation of Crimea in 2014 with prince Volodymyr's "baptism" in Chersoneses, ancient Greek city whose ruins you can still find in Crimea, in Sevastopol. (Volodymyr too, was grand prince of Kyiv, and his actual name, Volodymer, is closer to today's Ukrainian (Volodymyr) than Russian (Vladimir) pronunciation).

This reference to grand prince's baptism as a "reason" for military and political act of Russia's annexing Crimea in 2014, brought archaic and "sacral" metaphors to politics, later used extensively by Russian and pro-Russian separatists to justify Russian-provoked war in Eastern Ukraine.

Of course, re-writing of history was used as a political tool during Soviet times, and Putin's statements seem to reuse old practices. But in fact they do more than that. Soviet historiography was interpreting Kievan Rus as a "cradle" of three nations, the Russians, the Ukrainians and the Belarussians (always in this order). This "multicultural" approach was used to mask predominance given to Russian culture and Russian language in USSR. But at least it tried to use this mask, and to pretend that all three nations have their part in the Eastern European medieval history.

Today Putin's political historiography goes far beyond that. The "cradle" legend is broken, and all seems to fall under a grand Russian narrative. If Anne de Kiev and Yaroslav the Wise are called "Russians", this implicitly means that Ukrainians or Belarussians have no political history, no statehood heritage, and therefore are not even nations. Good basis for any future political "annexation".

Turning history into political tool never worked for good. Nazis under Hitler claimed that lands of Eastern Europe were "always theirs" as occupied since long ago by "Aryan" tribes and German colonizers – and therefore should be "liberated" from Jews and Slavs. Fascists under Mussolini believed that the Balkans, Greece and Adriatic were "historically" Italian, and therefore old Roman imperial territories should be brought back to a new fascist state. All these "historical references" were used to justify wars that took dozens of millions of human lives in 20th century.

These traps and tragedies should not be repeated. Holocaust is still a warning, reminds Timothy Snyder; and old clichés from World War II that used archaic history as a political tool and justification for military expansion, should remain a warning too. History is not an ideological manual; it leaves us with multiple narratives and memories, which we have to study and learn, without manipulation.

Indeed, history is bigger than our interpretations, it is certainly bigger than rulers obsessed with expansion.

When history is annexed, and used as weapon, this cannot be tolerated.

Some quotes from Ukrainian intellectual on this topic:

ʺAnnexation of territories is impossible without annexation of history", – Oleksandr Sushko , research director of the Institute for Euro-Atlantic Cooperation

"Putin, in front of the whole French audience, cynically "expropriated" Anne of Kyiv and turned it into ownership of the Russian Federation, as he did earlier with Crimea" – Oksana Zabuzhko , prominent Ukrainian writer.

On the state of Ukraine’s environment during wartime, Ukraine’s endeavors to hold the aggressor accountable, and on Ukraine’s green path despite the odds.
VIDEO
May 30, 2022

Russia has occupied about 20% of Ukraine's territory and continues its offensive in the east. But. Here is our video explaining why it will never conquer Ukraine.