February 9, 2018
On 16 January 2018, Volodymyr Balukh, a Ukrainian who lives in Russia-occupied Crimea, was sentenced to three years and seven months in a Russian prison and given a 10,000 Russian roubles (144 euro) fine. However, Balukh has already been held under home detention since his “arrest” on 8 December 2016. The first court’s decision in his case was announced on 4 August 2017, but an appeal was later lodged. Nevertheless, the Russian occupation government felt determined to put him behind bars. 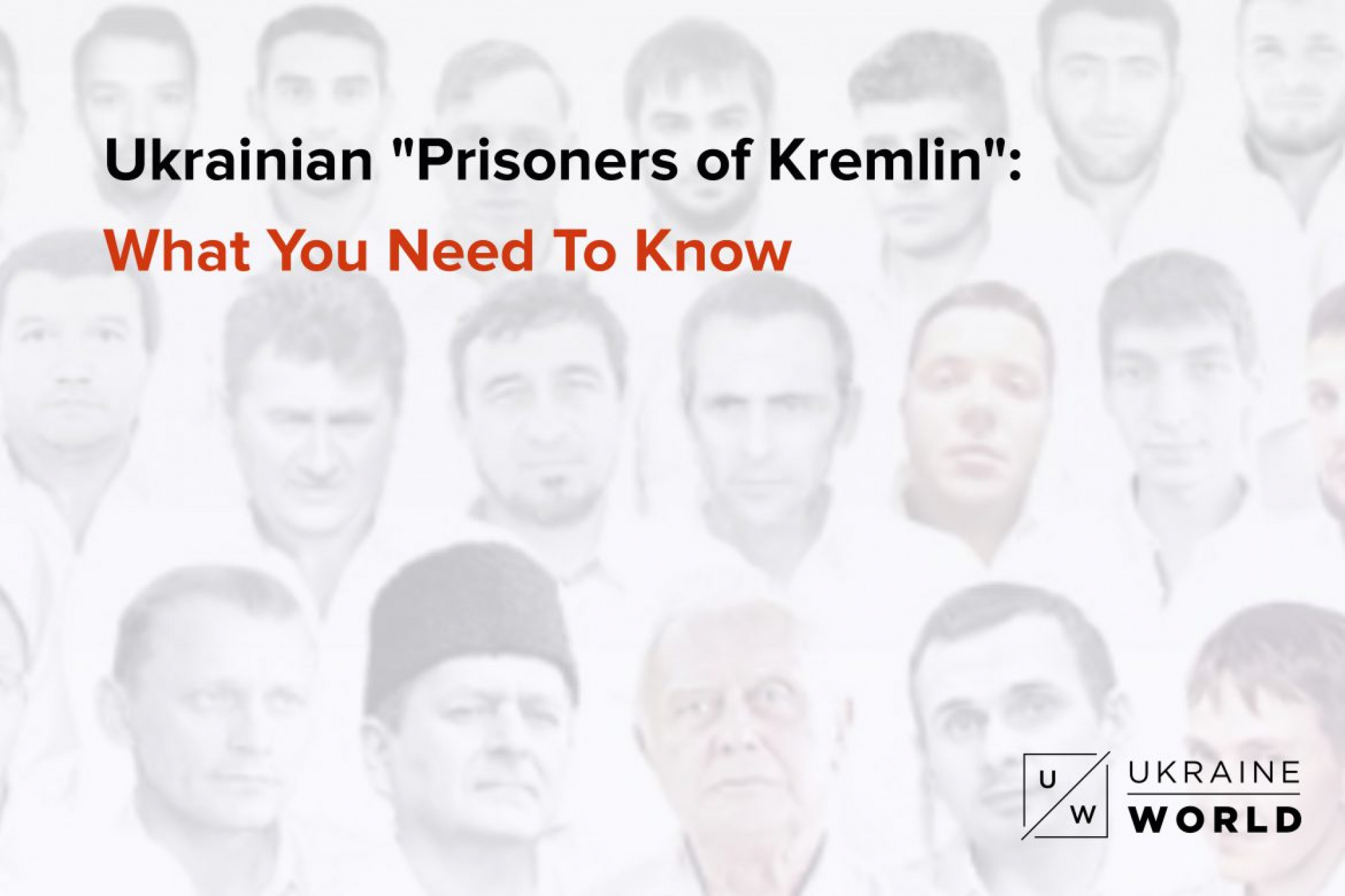 The Ukrainian farmer was accused of illegal storage of ammunition and explosives. His lawyers have proven that all the evidence against him had been planted. Thus, Balukh was detained because he refused to take Russian citizenship, kept raising the Ukrainian flag above his house and hung a plaque with the inscription "Street of the Heroes of the Heavenly Hundred" on its wall.

Volodymyr Balukh is one of the so-called "Prisoners of the Kremlin" — Ukrainians and Crimean Tatars who are dangerous for the occupation "government" of Crimea. February 2018 will mark the fourth anniversary of Russia's illegal annexation of the peninsula. Four years ago Moscow took over Crimea and started weeding out those who had enough courage to protest against this illegal act.

The website of the #LetMyPeopleGo initiative has put together the list of the "Prisoners of the Kremlin" — as of January 2018 it consists of more than 60 people. Russian propaganda has been portraying these people as "war criminals," "saboteurs," "spies" and "terrorists." Many of them have been tortured into giving "confessions." Alya Shandra, managing editor at Euromaidan Press and a member of #LetMyPeopleGo initiative, pointed out in a UkraineWorld podcast that Russia uses these cases to argue that Ukrainians are aggressors, while Russians are merely victims. 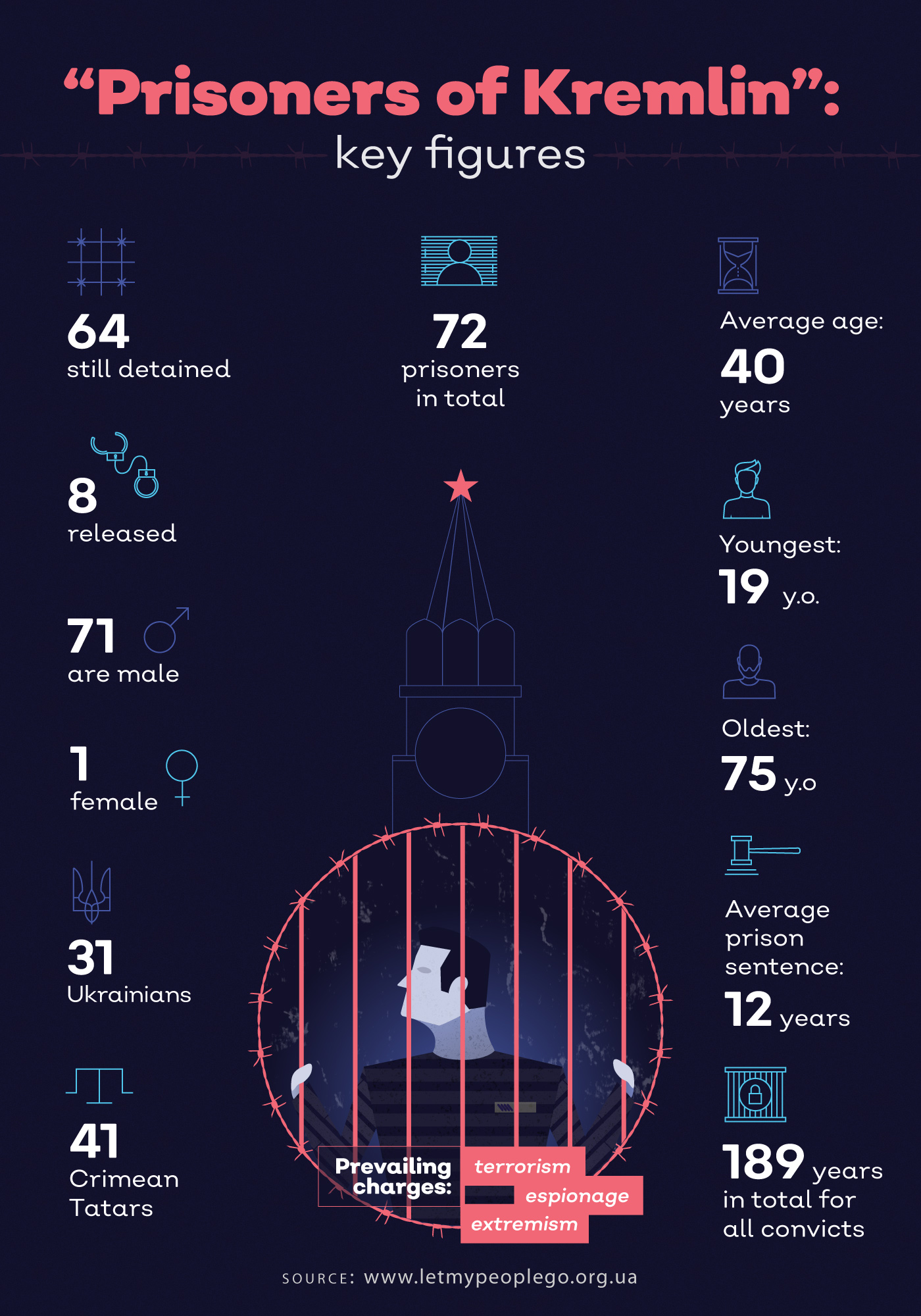 Some names might be well known to Western readers. The cases of Oleh Sentsov, Oleksandr Kolchenko, Emir-Usein Kuku, Roman Sushchenko and several others are often covered by media reports. Their names can be heard in the statements of Western leaders. However, they are only a tiny part of the list.

Most other "Prisoners of the Kremlin" are not being talked about, as they do not have vivid backgrounds. Oleksandra Matviychuk, the Head of the Board at Center for Civil Liberties, told UkraineWorld that some of the prisoners have been taken without little or any justification, as though according to some sinister "Russian roulette." "Serhiy Lytvynov, an ordinary scrap metal gatherer from Luhansk who went to Russia for medical treatment", was suddenly called "a member of Ukrainian volunteer battalion who killed over 40 people," Matviychuk argues.

More than half of the prisoners are Crimean Tatars, whose only crime consists of being Crimean Tatar, or Muslim. As Russia has a long story of conflict with Muslims in Chechnya, Tatars who are activists are often automatically perceived as terrorists. Alya Shandra points out in her conversation with UkraineWorld that the faith of these people is a problem for the West as well. She explained that the fear of Muslim extremism is growing worldwide. Therefore, many people prefer to close their eyes to Muslims being imprisoned in Crimea.

The majority of Tatar "Prisoners of the Kremlin" are accused of participating in Hizb ut-Tahrir—an international, pan-Islamist political organization which is legal in most countries, including Ukraine. It has been banned in Russia since 2003. However, it is far from doing anything extremist. "Crimean Tatars have only been involved in peaceful movements. If Russia's FSB could label them as terrorists, it would hinder international support for Tatars and Majlis," says Alim Aliev, the manager of The Crimea House.

Western support is indeed vital in the cases surrounding "Prisoners of the Kremlin." The Crimean Tatar leaders of the Majlis, a local assembly, Ilmi Umerov and Akhtem Chiygoz, were freed in October 2017 due to the pressure of international watchdogs, the EU and Turkey. Alim Aliev agrees that the rule "more pressure leads to more releases" is working. However, such successes have been few so far. On the contrary, the list is growing, as more and more people are being captured by Russia. There is also the danger of the prisoners issue slipping under Western radars, as the West is increasingly preoccupied with other problems like Syria and North Korea.

According to Oleksandra Matviychuk, the release of Umerov and Chiygoz is the result of big politics. "Putin's friend (and influential Donbas negotiator for Ukraine) Viktor Medvedchuk and modern (Turkish) dictator Recep Tayyip Erdoğan have been involved. Thus, people are rather a bargaining chip in this case," she notes.

Alya Shandra points out that Muslim countries could be doing more. "It would be logical if Muslims stood up for Muslims. But we rarely see such developments. These countries do not wish to spoil their relations with Russia," she adds.

The Ukrainian government is not very active in cases regarding the f "Prisoners of the Kremlin." Statements and calls to West are made regularly but activists point to the need for more action. Aliev underlines that there has been no law on support for these prisoners and their families. The draft law #6700, which introduces norms on financial and judicial support for "Prisoners of the Kremlin" and their families, was submitted to the Verkhovna Rada on 13 July 2017, but has not yet been considered at plenary sittings of the Ukrainian Parliament. Otherwise, only several Ukrainian officials are actually doing something. "Valeriya Lutkovska [Ukrainian Parliament's Commissioner for human rights], Iryna Herashchenko [deputy speaker of the Verkhovna Rada and Ukraine's representative in the Trilateral Contact Group] and our diplomats are contributing, but their efforts are not systematic," he notes.

At the moment, the Ukrainian government is more focused on Ukrainian prisoners of war in Donbas. Recently there was a major success in this direction. At the end of December 2017, Ukraine and the Russia-backed "DPR"/"LPR" exchanged prisoners in the largest swap since the beginning of the war. Ukraine handed over 246 people in exchange for 74 Ukrainian prisoners.

A good solution would be to establish an international monitoring mission in Crimea which would observe all violations of human rights on the peninsula. In December 2017, the UN General Assembly approved a resolution which strongly condemns human rights violations in Russian-annexed Crimea and refers to Russia as an "occupying power" there. Such bold statements, however, have little effect without monitors in the field. Russia, naturally, has been opposing the creation of such a mission, which might lead this situation to a stalemate. Until further developments, the most important thing is to follow the cases of the "Prisoners of the Kremlin" closely, provide them with judicial assistance, ensure their safety in Russian prisons, and shed as much light as possible on human rights violations in both Crimea and Russia.

Vitalii Rybak
An analyst at Internews Ukraine and UkraineWorld, an information and networking initiative.
Next article

Donbas is an integral part of a shared Ukrainian and European heritage. In our new video produced together with the Ukrainian Institute, we explain why.
Russian Aggression
July 26, 2018

Abducted and illegally detained: the story of Pavlo Hryb, another Ukrainian prisoner of the Kremlin

On 23 July, the Russian authorities began the trial of Pavlo Hryb, a 19-year-old Ukrainian citizen who was abducted from Belarus by Russian security services. After...