Online Wars: How Ukrainians Live Without the Russian Internet 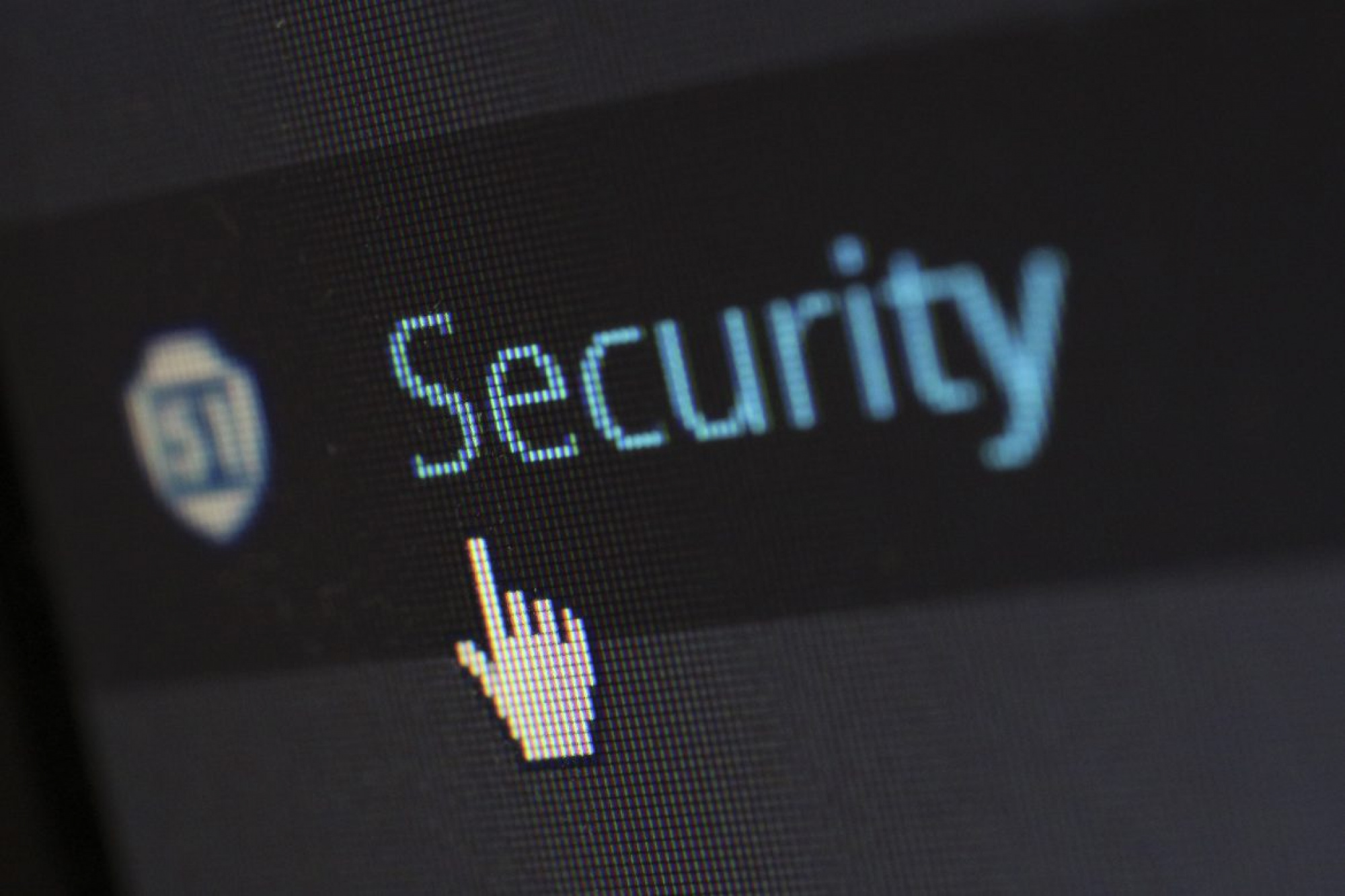 Balancing between values of freedom and security, last May Ukraine sanctioned the most popular Russian Internet services. The aim was to defend its citizens from the Kremlin's surveillance and propaganda. But this move has more far-reaching ramifications for Ukrainian society. Though this was done in hardly a transparent way, it breaks the life patterns of Ukrainians in the Internet world.

In May 2017, Ukrainian President Petro Poroshenko, on the basis of a decision by Ukraine's National Security and Defense Council, imposed sanctions on some Russian Internet services, like VKontakte and Odnoklassniki (Russian social networks, equivalents of Facebook); Mail.ru (an email service); and Yandex (a search engine). 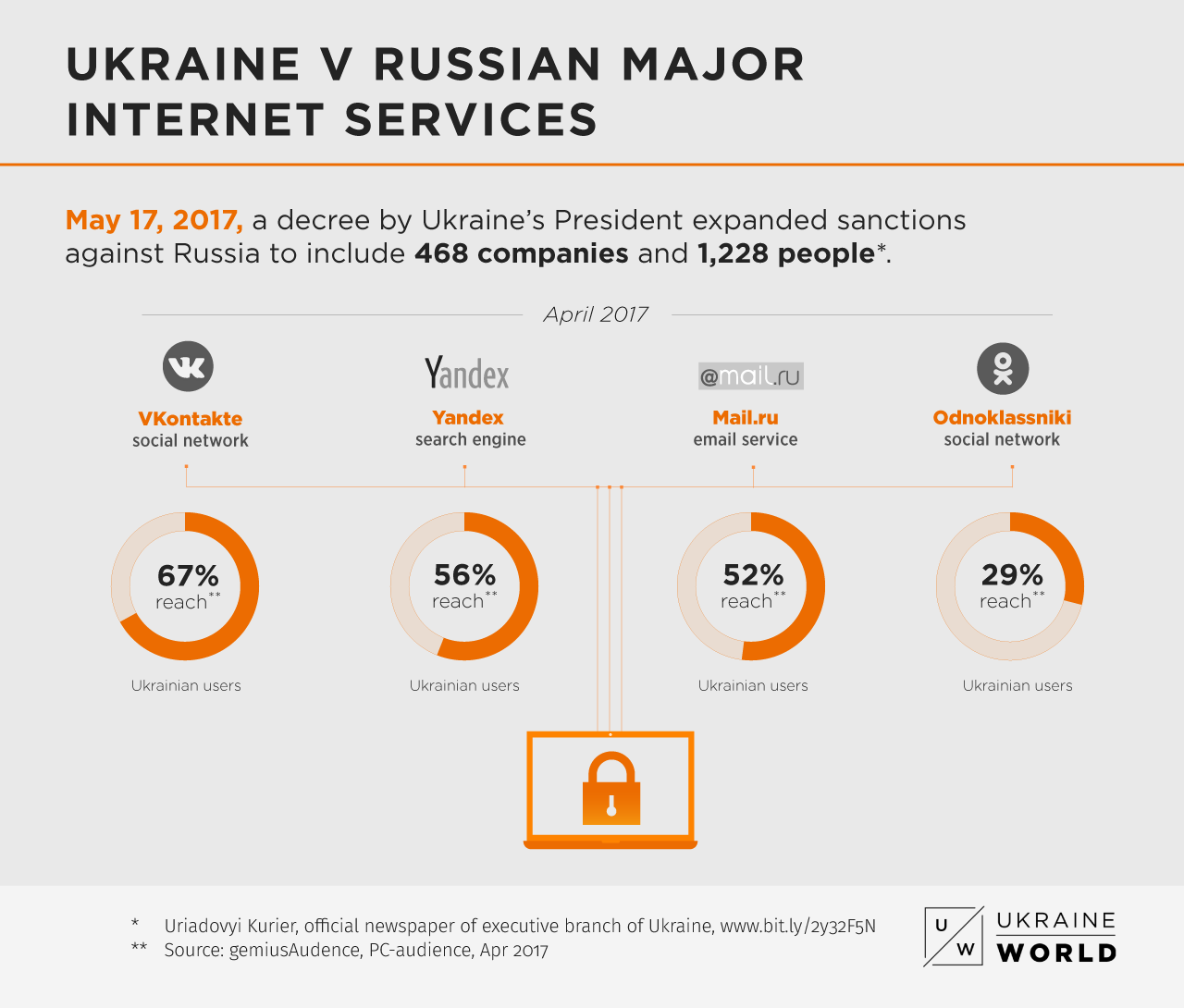 Kyiv said it had evidence that Russian security services exploit Runet, the Russian Internet, to spread Kremlin propaganda messages and to collect personal data of Ukrainians, including state employees and soldiers fighting against Russian aggression in the Eastern Ukraine. Sanctioning Runet, Kyiv is defending itself from foreign surveillance and propaganda, the government said.

The cause is just, but the execution causes doubts in terms of its accordance with fundamental rights. This ban was presented as economic sanctions against Russian companies providing Internet services. But, in fact, it goes far beyond business or the economy. Critics said it violates human rights: freedom of expression and privacy.

It can be hard to find an alternative solution on how to protect Ukrainians from Russian surveillance in social media, their privacy (principle of necessity and proportionality). Also, Ukraine's security service has asked these Russian Internet companies to react to incitement of violence, but there was no response from the Russian side. Yet there are other ways of countering propaganda within the network without limiting freedom of expression. Therefore, many questions remain on whether the move was necessary or proportional. Moreover, the aim and evidence was not fully communicated and explained to a wider audience. And it's not an independent apolitical court that made the decision.

However, what's done is done. Today, the decision has started to affect society, which is gradually becoming more vigilant regarding developments on the Internet. "Before the blocking, discussion on Internet freedom and digital rights was hardly present in society. Now it has shifted to a new level. Without the blocking and, as a result, the political debate, it would have been easier to push through other Internet restrictions," Vitalii Moroz, Head of new media department at Internews-Ukraine, a Ukrainian NGO, told us. This debate helped, in part, to resist such legislative initiatives as pre-trial blocking of websites and the possibility to restrict access to information.

After blocking, the audience of VKontakte fell by 50%, while that of Yandex and Mail.ru – fell by 75% and Odnoklassniki by 80%, according to data provided by Gemius, a company specialising in gathering, processing, and analysing data on the behaviour of Internet users.

This outflow of Ukrainians from the Russian online resources makes the Internet content in the country healthier. Facebook, for instance, is blocking posts inciting violence, contrary to VKontakte. Vkontake has also been widely used as a network for exchanging pirate audiovisual content (this is now less widespread), which Facebook has never been. On Facebook, users discuss pressing social and political matters. It is less saturated by Russian propaganda, which can dissuade constructive talk.

Despite a steep fall in the number of Ukrainian users, some are still present in Runet, especially in VK (34.33% reach of PC-users in September according to Gemius). To avoid the government ban, Ukrainians use VPN (accessible through Opera browser), which redirects user traffic through other countries, like the U.S., Germany, the Netherlands. 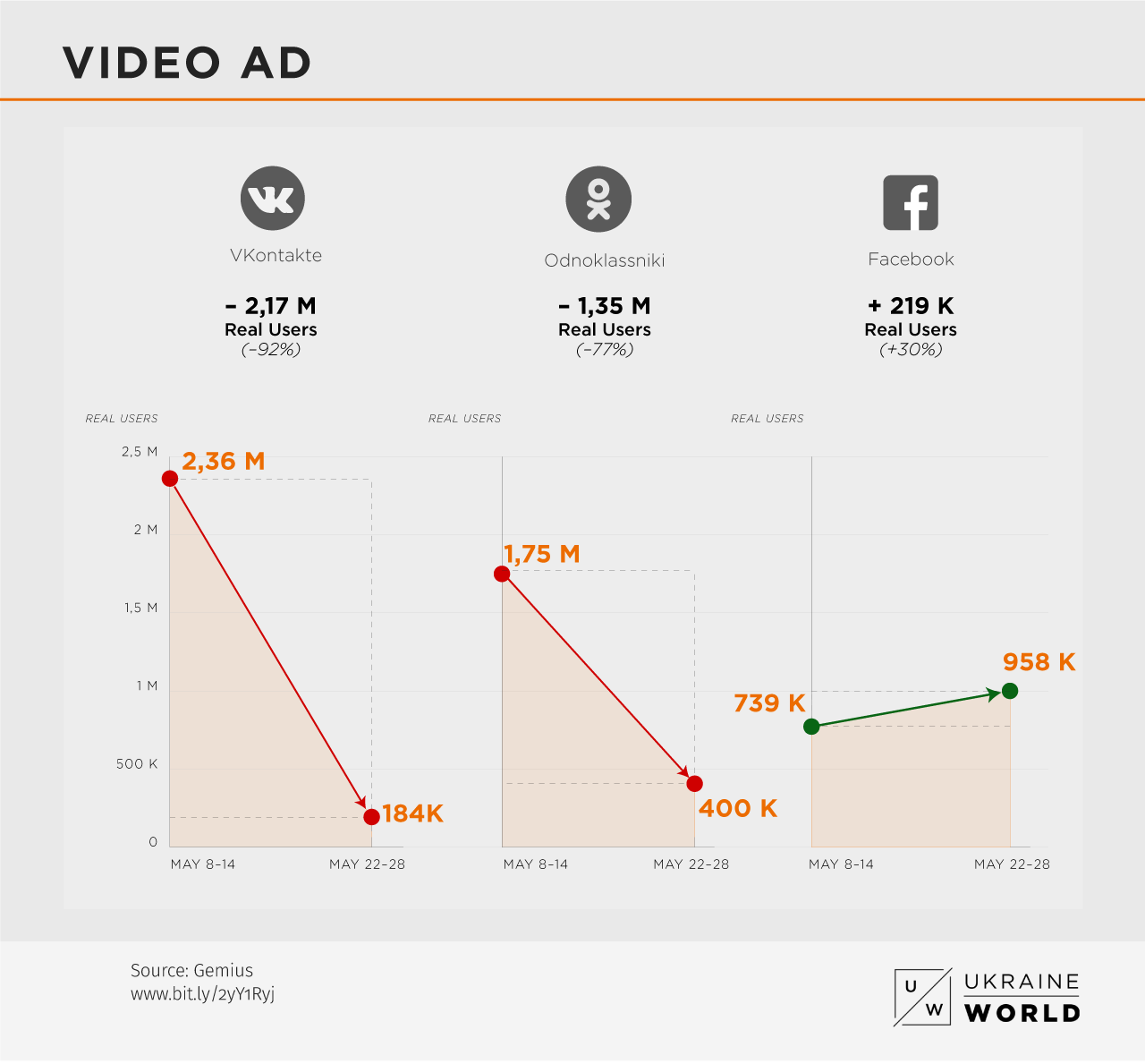 Not many knew about VPN before the sanctions. "Now Ukrainians are becoming more tech savvy. They are more interested in the Internet ecosystem. Users are googling what the anonymizer is and how VPN work. This helps Ukrainians to improve their critical perception of information," says Vitalii Moroz. And this means a great deal in times of war and information security threats.

Some Ukrainian national media are still active on VKontakte. They make posts and spread links to the websites. "There is nothing wrong with the fact that Ukrainian media maintain and update their pages on VK. You cannot abandon your audience which is still present on such a popular platform. Moreover, we won't be able to influence the Russian-speaking space if we are not there," admits Tetiana Popova, Senior Strategy Communication Expert at the Information Security NGO, and Ukrainian former deputy minister for information policy.

Russia, however, is showing that it is rather flexible in reacting to countermeasures. It is looking for other ways to spread its messages and gather data about Ukrainians. For example, it created poshukach.com, a Russian search engine whose name sounds like a Ukrainian one. After just a few months of functioning, it already had about 6-7m visits. 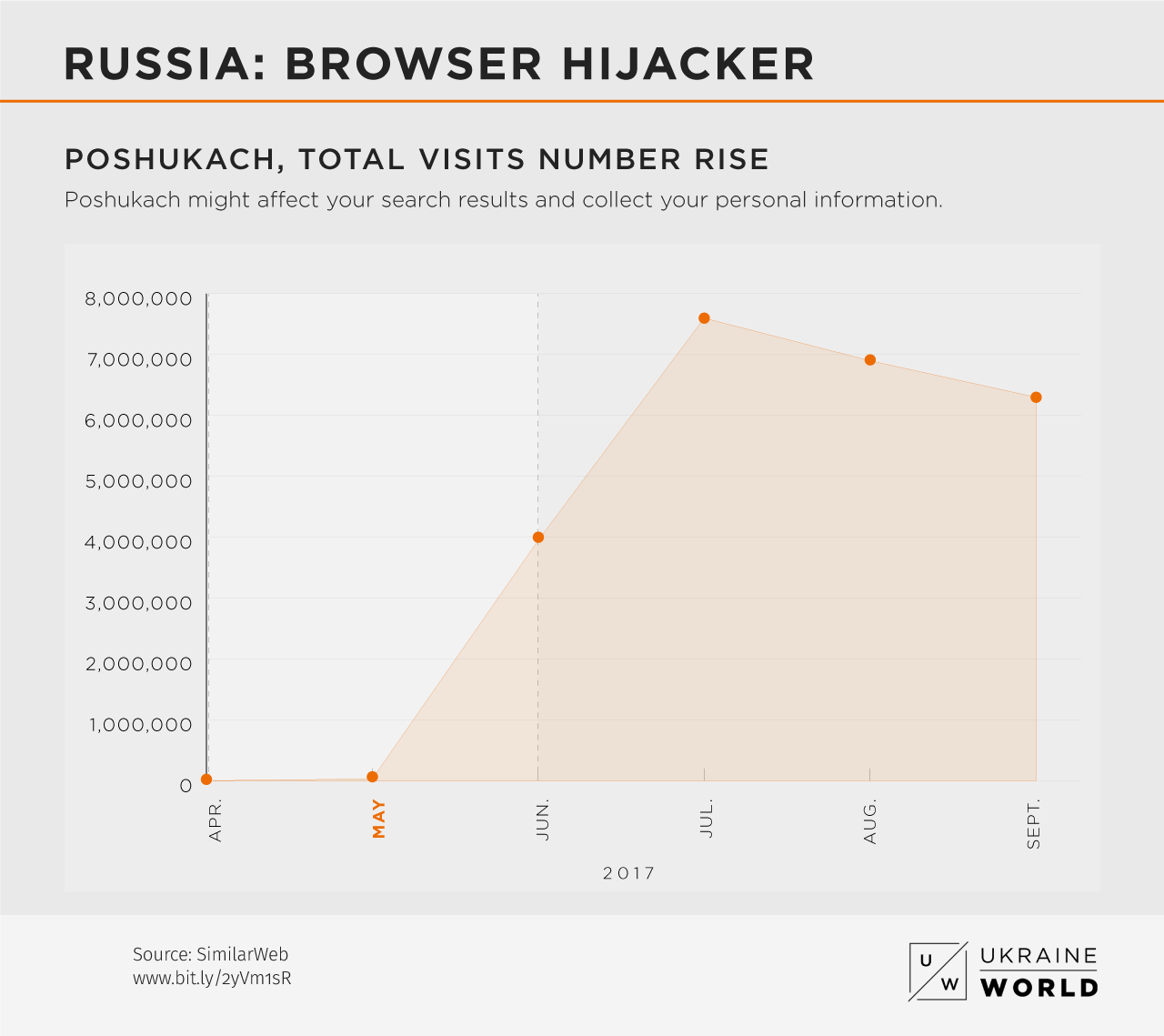 This browser might affect your search results and collect your personal information. So it's potentially dangerous for your privacy and security.

Furthermore, the Russians are developing free VPN, like FreeU. They are dangerous as they can enter your computer and get data that is flowing in an entire corporate network.

Because of reduced audience outreach, Russian net services are losing profit from commercial ads, as noticed by Gemius. To compensate for this loss, Odnoklassniki and Yandex have updated their mobile apps, enabling access from Ukraine. From the Yandex browser on Android, users can also enter VK and Mail.ru. 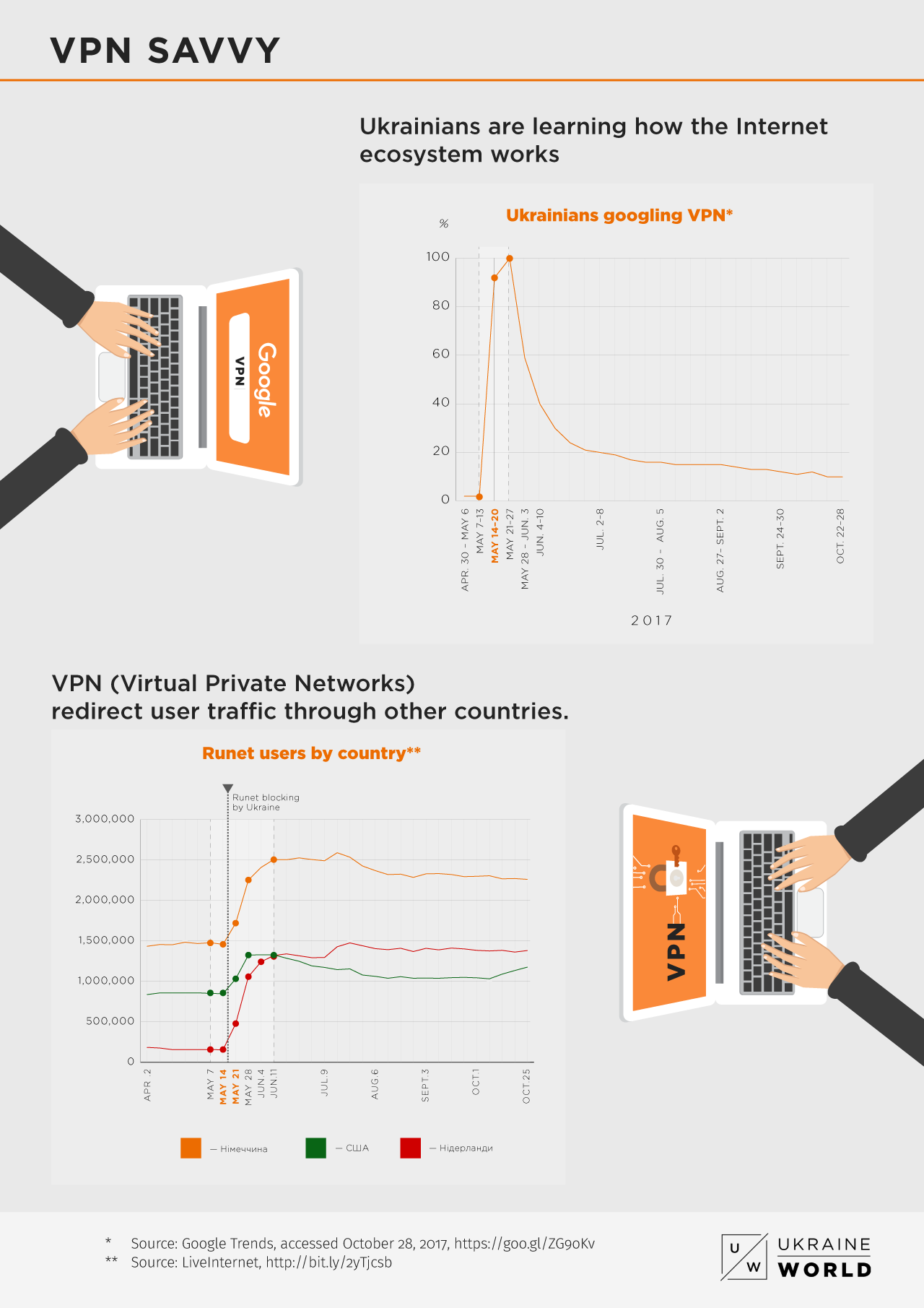 The effect of blocking is nonetheless visible. "Most people are passive content consumers. They consume what is supplied for them. Proactive people will always find a way to access VKontakte: VPN or other means. But the influence of VKontakte, Yandex, Odnoklassniki is decreasing", says Serhii Kostynskyi, a member of the National Council of Television and Radio Broadcasting of Ukraine. Not everyone is trying to evade blocking. Instead, they are searching for easy alternatives, like Facebook social media, Spotify, Deezer, or SoundCloud for music, Google browser. 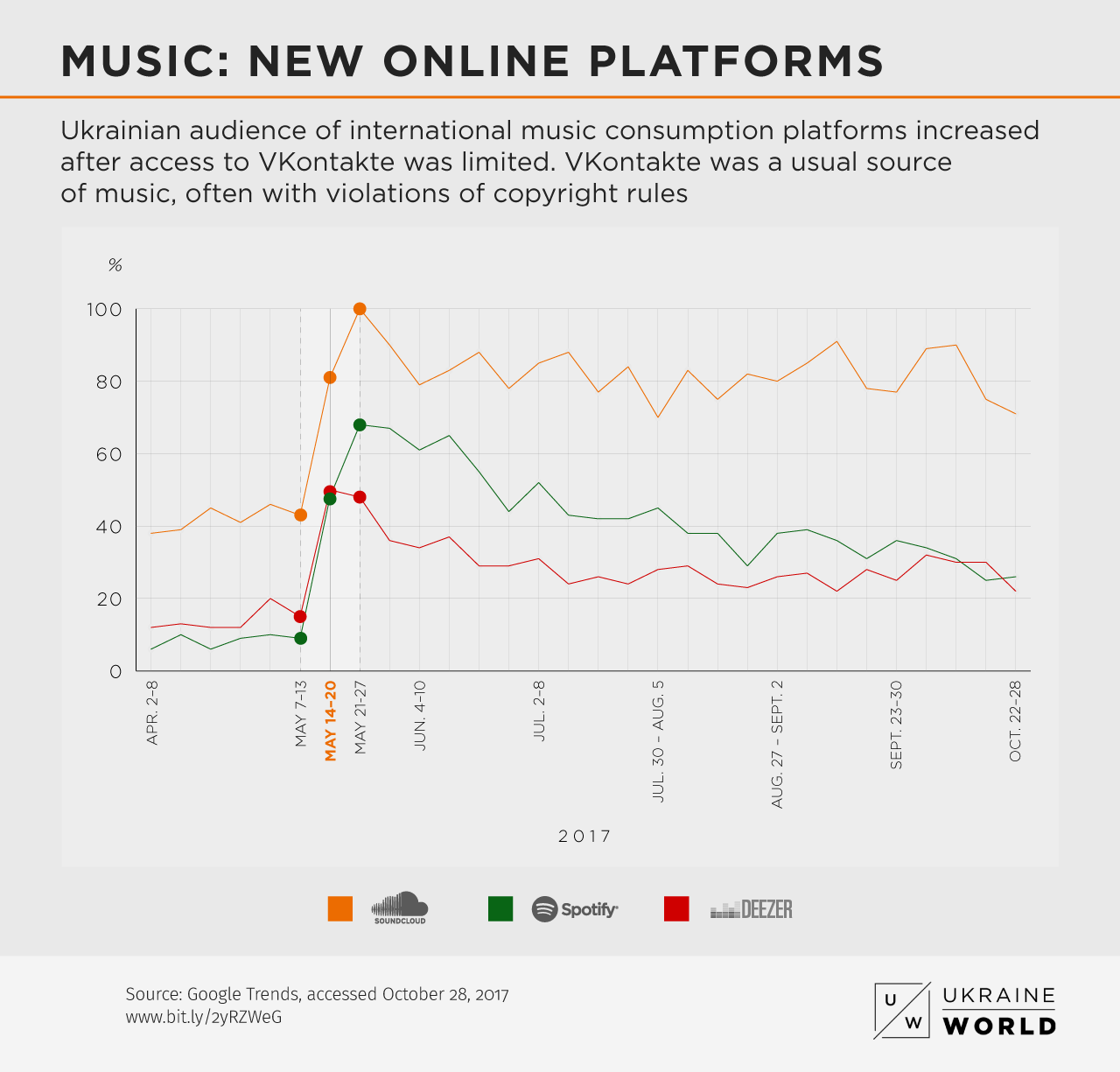 Even before the blocking, many Ukrainians were active on Facebook and using Google instead of Yandex. But Ukrainian sanctions against Russian social networks make them go further: stop or substantially decrease using Russian net services. People who spend around 6 hours a day in VK or Odnoklassniki were forced to search for alternatives while only some have decided to bypass the restriction.

Ukraine continues to fight the Russian information monopoly, which has been one of the key factors of Russian domination in the country. Prior to blocking Russian websites, it had banned some Russian films and TV series. Both moves are very controversial from the legal and ethical point of view. With legal flaws, they are nonetheless creating facts on the ground. For example, they are stimulating domestic Ukrainian audiovisual production: for the first time since independence in 1991 Ukraine really has started producing films or TV series, instead of blindly consuming the Russian (often ideologically toxic) product. At first, it is always hard to get used to something new. However, on the other hand, these moves push Ukrainians to look for alternatives. And it cannot but have an effect on the country's social and political life.

Ruslan Minich
An analyst at Internews Ukraine and UkraineWorld
Next article

“Words and Wars.” A Book About Kremlin Propaganda

Victor Medvedchuk, Vladimir Putin’s key ally in Ukraine and the leader of the pro-Russian “Opposition Platform For Life” party, has very likely been using a huge...
Russian Aggression
April 16, 2020