February 7, 2019
Physical training and sports in the former USSR had always played a major role in the lives of Soviet citizens. The population’s involvement in sports was substantially fueled and bolstered by the Soviet state and was propagandized almost everywhere: on TV, in print newspapers and magazines, on banners, etc. 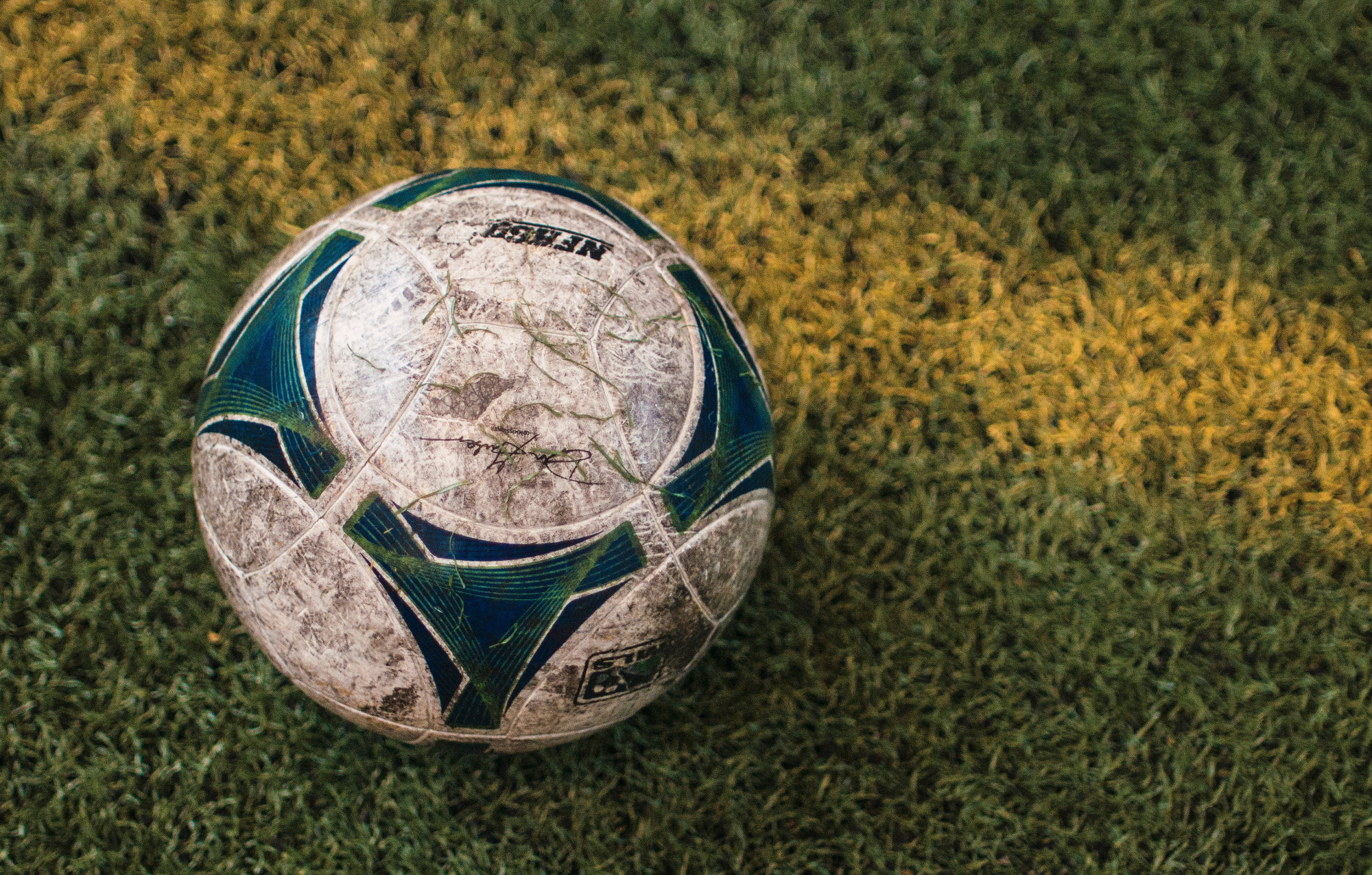 Sports had been considered part of building "new man" since the Bolshevik revolution of 1917 : in this sense, it was no different from the athletic pathos present in other 20th century totalitarian regimes like nazism or fascism.

But during the Cold War sports increasingly became a part of Soviet "geopolitics" as the USSR tried to portray its sports achievements as a sign of its global power.

In this regard, football was no exception, with a number of football teams enjoying valuable support from different Soviet state agencies, while the national team's matches in international tournaments seen, certainly in a number of cases, through the prism of a political battle with an opponent. As a multi-national embodiment (but eager to build a unified "Soviet people", mostly at the expense of existing nations and their identities), the USSR tried to melt different nationalities in their view of presenting sports and football successes as achievements of the Soviet people.

Around the world the Soviet Union was still mainly called "Russia", and Soviet citizens, including sportsmen, were labelled "Russians".

However, there followed a hefty dose of Soviet football reality and successes on the international arena were actually forged by non-Russians,including Ukrainian professionals, who had frequently lead the way in the Soviet-style system of the most popular sport in the world.

And here are some examples. 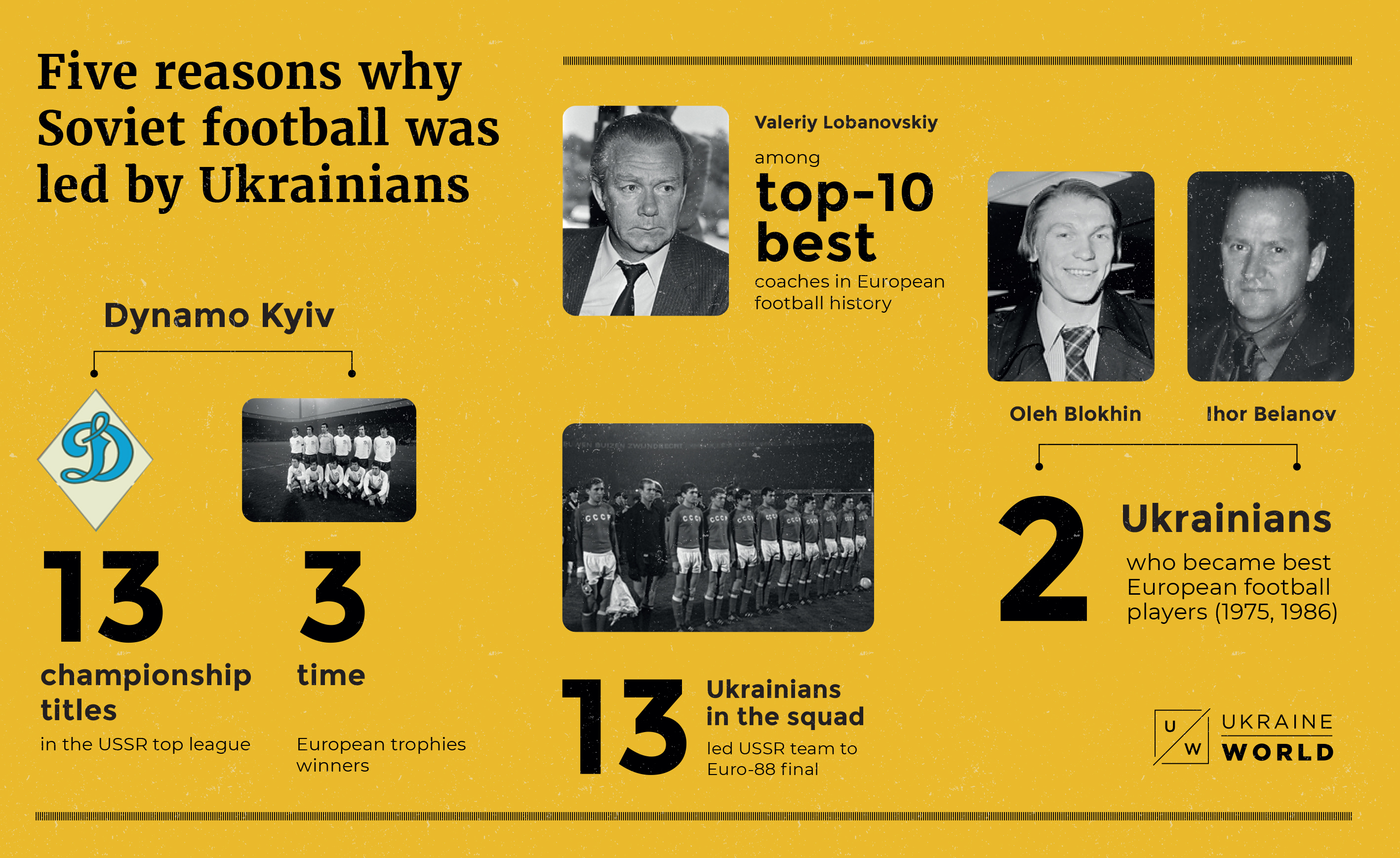 From the time the first whistle was blown inaugurating the kick-off of the USSR's top league football tournament in 1936 up to the collapse of the Soviet empire in 1991 , Dynamo Kyiv remained the most champions' title-winning football team among all tournament participants. The club from Kyiv managed to win 13 champion titles, leaving behind its most persistent rivals, from the Moscow-based Spartak and Dynamo teams, with 12 and 11 titles, respectively. Moreover, over the course of 18 years at Dynamo Kyiv, Oleh Blokhin , the club's standout striker, gained the title of overall top goal-scorer of the Soviet top league with a total of 211 goals.

"Vivat, the king" song performed by Tamara Gverdziteli, a Georgian Soviet singer, as a tribute to Oleh Blokhin's excellence

Six domestic titles from the time of their first success in 1961 laid a strong foundation for Dynamo's first achievement on the international arena: in 1974/1975, Kyiv club triumphed over their Hungarian contenders from Ferencvárosi football club to win the first ever Cup Winners Cup in Soviet history. Since then, Dynamo Kyiv has won two more European cup finals – the UEFA Super Cup in 1975, and the Cup Winners Cup in 1985/1986, in which European football heavyweights from Bayern Munich and Atlético Madrid, respectively, were beaten. By contrast, in Soviet times, no Russian team managed to win a European football cup.

It meant Dynamo Kyiv , a Ukrainian team, had the biggest number of victories in European football cups in Soviet history.

3. Ukrainians in the list of the best European football performers

The success of Dynamo Kyiv and their players in European tournaments was also recognized at the highest European level. In 1975, Oleh Blokhin, most likely the famous Ukrainian football player of Soviet times, was awarded the annual Ballon d'Or (Golden Ball) prize for the best European footballer of that year. Eleven years later, in 1986, Ihor Belanov, an Odesa-born football player and Dynamo Kyiv midfielder, equaled Blokhin's record by being named European footballer of the year and receiving the Ballon d'Or award. Belanov became the second Ukrainian and the third Soviet football player in history, alongside the famous Dynamo Moscow's goalkeeper Lev Yashin, to receive the most prestigious award in European football. This puts Ukrainian football performers in the lead in terms of European awards received among their other Soviet contenders.

4. Euro-88: Ukrainian football players as the engine of the USSR national team

The USSR national football team, as the winner of the first ever 1960 European Championship tournament and the team, which missed the previous three tournaments, put high hopes on Euro-1988, which was held in West Germany. However, in spite of the team's good performance at the group stage (2 wins, 1 draw, first place) and victory against Italy in the semi-final, the Soviet Union lost to the Netherlands in the final.

The Ukrainian part of the team became the real engine of that squad, and moved the Soviet team forward to win the tournament's silver. With 13 Ukrainians in the squad (out of 20 players) and 7 Dynamo Kyiv players in the line-up in the final match, with 6 goals scored by Ukrainian football players (out of 7) during the entire tournament, the USSR national team came just within a whisker of winning its second Euro tournament trophy. Besides, that team was led by Valeriy Lobanovskiy, the brilliant Ukrainian head coach.

"As for me, Lobanovskiy may be regarded as a great master of football. And there is always something to learn from great masters," Carlo Ancelotti, an Italian coach who has managed to win the UEFA Champions League three times,says in the "Lobanovskiy Forever" documentary. Ancelotti's words are just a drop in the ocean of praise voiced about Lobanovskiy and his tremendous legacy by legendary Ukrainian and foreign football players, managers and other people engaged in the most popular game in the world. His trademark as a football player was the "falling leaf shot" (also known as a "banana shot"), which means scoring directly from a corner kick, without the ball touching any player. As a football manager, he became famous for introducing leading scientific achievements into football tactics and promoting so-called "system football", which demanded a high-pressing style of play from players who, irrespective of their position, should also be able to operate on different areas of the football pitch. "Lobanovskiy pioneered the use of computers to sift through match data, not seeing midfielders, defenders and strikers but a kind of fluid applied human chemistry and providing in the process the most lucid expression of a Soviet idea of what football could be, an expression of shared collective power, some futuristic total football dream," Barney Ronay, a senior sports writer,writes in his column for The Guardian.

As recognition of his achievements, Lobanovskiy was included by UEFA in the list of top-10 best coaches in European football history , keeping company with such football giants as Johan Cruyff, Rinus Michels, Sir Alex Ferguson and others.

As we can see, it's really hard to assess the tremendous contribution which Lobanovskiy made to the development of football; his football genius can hardly be figured out in full. Dynamo Kyiv's home stadium and a street in Ukrainian capital are named after him.

Thus, despite attempts made to blur the lines between nationalities in view of presenting sports and football advances as those achieved by the Soviet people, the football in the USSR of the 1970s-1980s was driven mainly by Ukrainian teams and performers. Dynamo Kyiv and the club's outstanding talents of various Soviet epochs, as well as the genius of Valeriy Lobanovskiy, should and always will remain an integral part of Ukrainian and world sports history.

Is the Kremlin Really Afraid of a Farmer?

What has Russia said about its retreat from Kherson?

On November 11, Ukrainian troops entered Kherson (a southern city which had been under Russian occupation since the beginning of the full-scale invasion). Local...
VIDEO
July 14, 2018

Before elections, cyber-meddling's becoming a more pressing issue to deal with. Cyber attacks can leave you without food, TV, electricity. Also, they can instigate...