February 20, 2019
He is different, and this difference may be part of the reason why he’s pulled ahead in the polls. 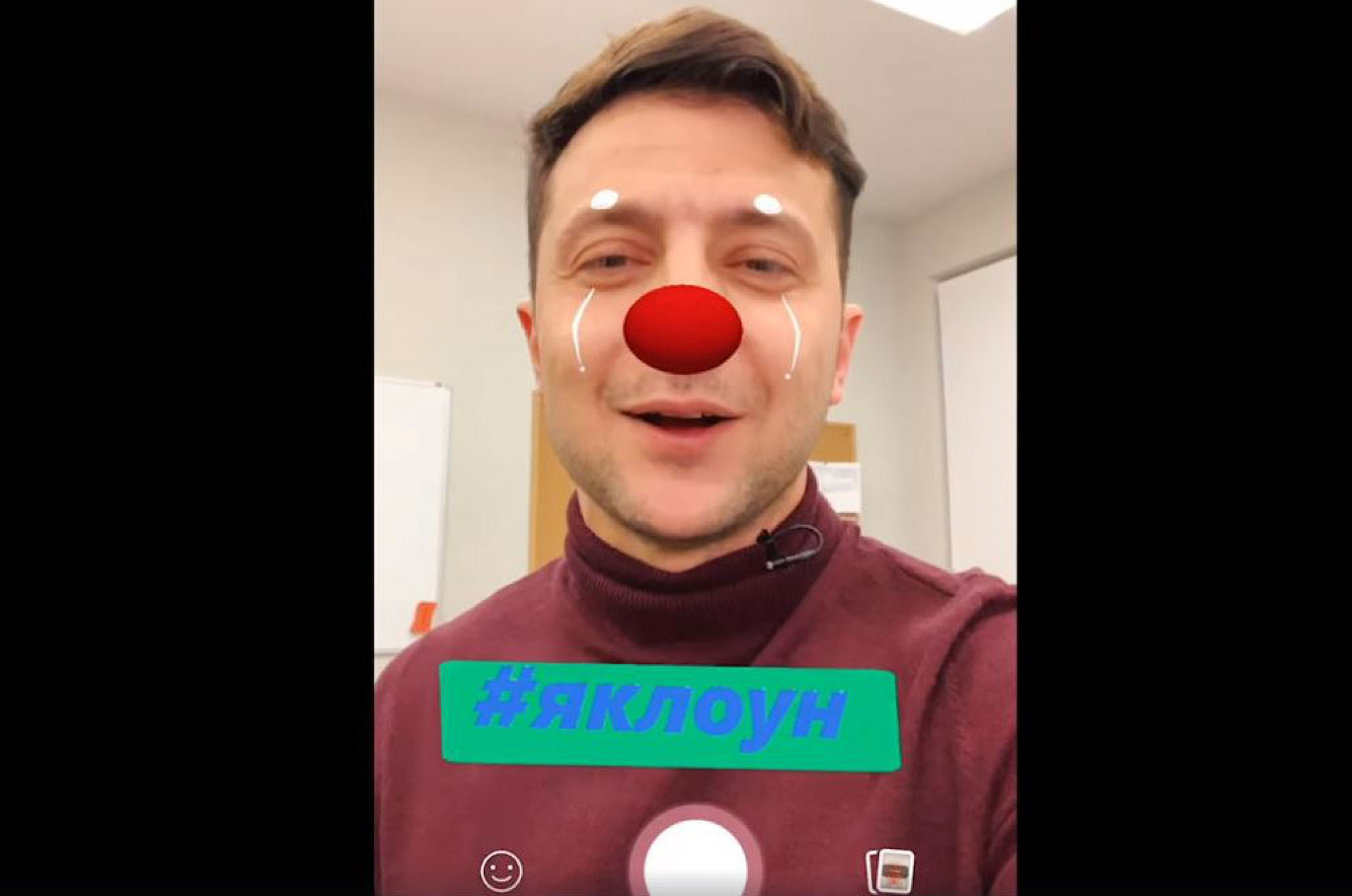 On February 7, hundreds of Facebook users in Ukraine posted videos with red nose filters. Everyone ended up looking like a clown, and that was precisely the point. Ukrainians are clowns because they've allowed the country's political elites to rob them blind, keeping salaries and social benefits low. This was part of a flash mob started by Volodymyr Zelenskiy, a Ukrainian comedian and the surprise leader in the latest polls for the presidential election slated for March 31.

Presidential candidates in Ukraine are using online political campaign tools like never before. But they're using them in different ways.

Both incumbent President Petro Poroshenko and former Prime Minister Yulia Tymoshenko, currently the second and third in the polls, rely heavily on Facebook posts. Through mostly paid advertising starting in May 2017, they began to massively increase their audience. Both candidates have more than 2 million followers on Facebook, their pages are professionally curated and updated often, and they tend to feature short formal video. Mrs. Poroshenko, a popular public figure, is often smiling in photos or video behind the president.

Poroshenko and Tymoshenko also use YouTube. In December, the video hosting platform cleaned up and removed fake accounts. As a result, Tymoshenko's channel lost about 44 percent of her subscribers, which suggests that her numbers were inflated by bots.

Zelenskiy is different, and this difference may be part of the reason why he's pulled ahead in the polls.

He's running a fun, largely satirical, and people-centered campaign online and in person. It doesn't hurt that he's famous or funny, either. Or new to politics.

He involves people in the campaign. Ukrainians can join his team by registering on his website. People can offer suggestions to his electoral program, which promises direct democracy through online referendums.

Zelenskiy constantly interacts with users asking advice on slogans and billboards. He starts flash mobs and creates a buzz.

Of course, the comedian's lead in the polls may not last. He needs to mobilize young voters and get them in the voting booth on March 31. This won't be easy. Young people can't be bothered to actually turn up, and this problem isn't unique to Ukraine. Another poll found that Zelenskiy's voters are the most likely to change their minds before election day.

His campaign seems to understand these vulnerabilities. In video posts, Zelenskiy urges people to check whether they are currently registered and reminds them to vote where they live rather than where they are registered in their passport, since many young people study or work in other cities.

His artistic activity also gives him an advantage. He has been touring with his comedy show around Ukraine. Together with paid concerts, they also give free performances.

Zelenskiy may get another boost in the polls—or keep his lead in March—as the third season of his massively popular Servant of the People TV series is released. In a promo video, he buries a corrupt official and whacks off a member of parliament's hand, criticizes the political elite, and dreams about economic prosperity and peace in Ukraine. These themes and theatrics might sound banal, but they resonate with the public. It's hard to overstate just how much popular disenchantment there is with the current political elite.

Zelenskiy is undoubtedly shaking things up with his new methods, but television is still king, and it's still dominated by Ukraine's oligarchs.

Television remains the main source of information for most Ukrainians. TV news on the most popular channels contains hidden and not so hidden messages for the various presidential candidates depending on the preferences of the oligarch who owns the channel.

Here Zelenskiy has two big advantages: he's a professional actor and brilliant on TV and the country's most popular television station, 1+1, broadcasts many of his programs, shows, and films. (This station is of course owned by oligarch Ihor Kolomoisky, which raises questions about the comedian's independence.)

Other stations seem to back others. For instance, Priamyi TV channel airs a _South Park-_like cartoon called Zashkvareni (a Ukrainian slang word for disgraced) mocking Poroshenko's main rivals, Tymoshenko and Zelenskiy. Priamyi is thought to have links to Poroshenko.

The insertion of the country's legitimately funny leading comedian into the race makes these elections novel. He's shaking up traditional political formats. But it remains to seen whether he can actually deliver.

This story was prepared with the financial support of the International Renaissance Foundation.

Ruslan Minich
an analyst and journalist at Internews Ukraine and at UkraineWorld, an information and networking initiative.
Next article

Ukrainians will choose the next Verkhovna Rada on 21 July. We have listed key parties which will fight for the places in the parliament.
PODCAST
June 14, 2018