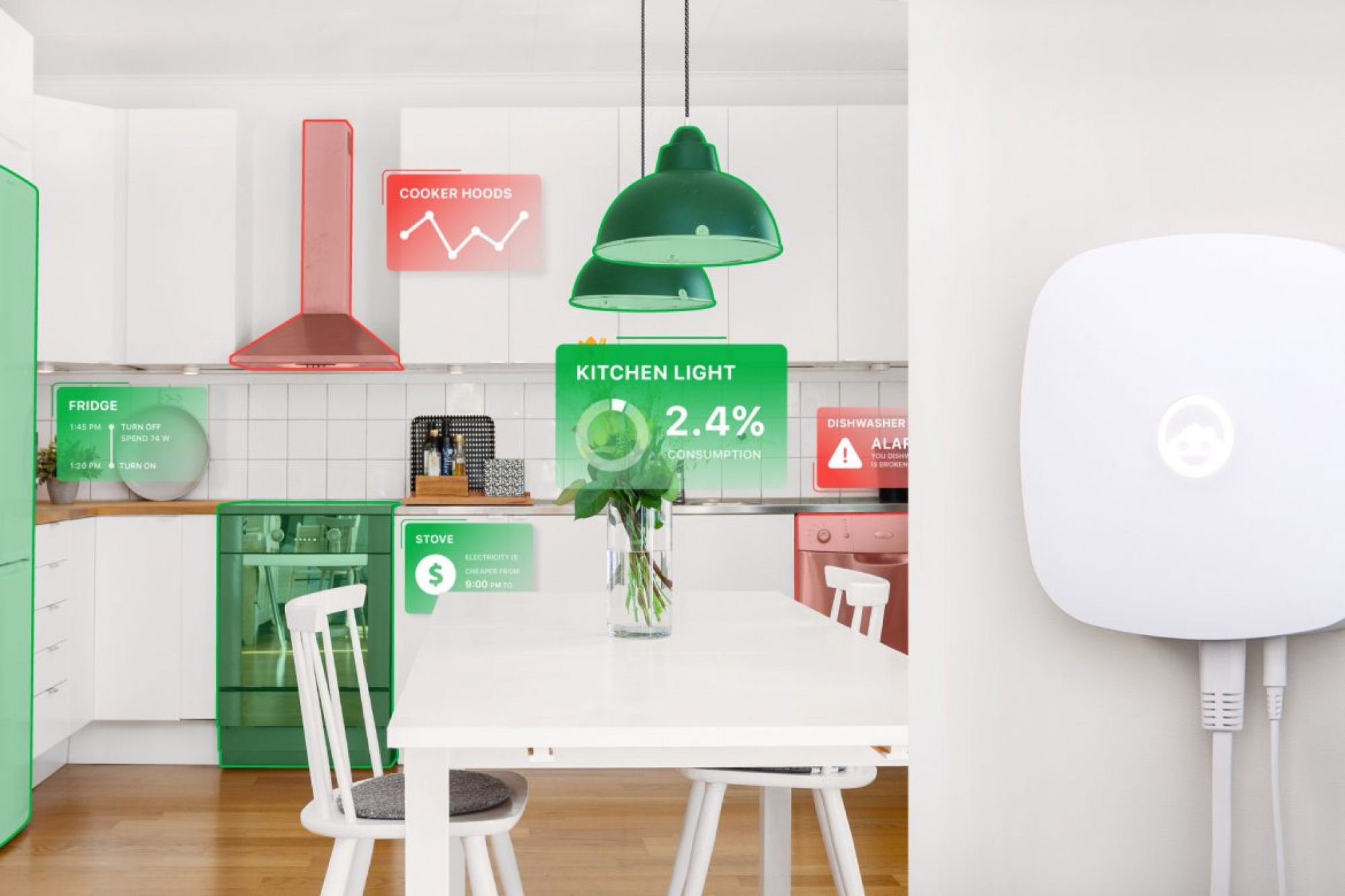 Residents of a multi-storey building in Lutsk, a northwestern Ukrainian town, used to consume a lot of expensive gas for heating. Now, instead, they receive much lower heat bills while flats are cozy and warm in winter and cool in summer. The building was featured with damp walls and cracks for years. Now there is insulation and individual heating plant. Energy consumption is controlled automatically. To heat 1 m2 of the house, tenants pay UAH 8 (EUR 0.25), instead of UAH 15 (EUR 0.5).

This is possible thanks to the government-sponsored "warm loans" programme, aiming at energy efficiency in Ukraine. The dwellers established condominium and took a loan. 40% of the loan is repaid by the state, interests are provided by local authorities. Dwellers themselves pay back UAH 3 (EUR 0.1) monthly for 1 m2 while savings are around UAH 7 (EUR 0.25).

This is not a one-off; at the same time, it is not a massive movement. Now only about 1 thousand warm loans are taken by condominiums while there are about 27 thousand condominiums established in Ukraine. It is hard to convince all the tenants that enhancing energy efficiency is feasible thanks to joint efforts.

This programme is more popular among individual dwellers. They borrow money to refit private houses or flats with double glazing, energy-efficient boilers, upgraded light-bulbs, just to mention a few. 20-35% of the loan is repaid by state; 15-30% of the loan or interests – by local budgets. 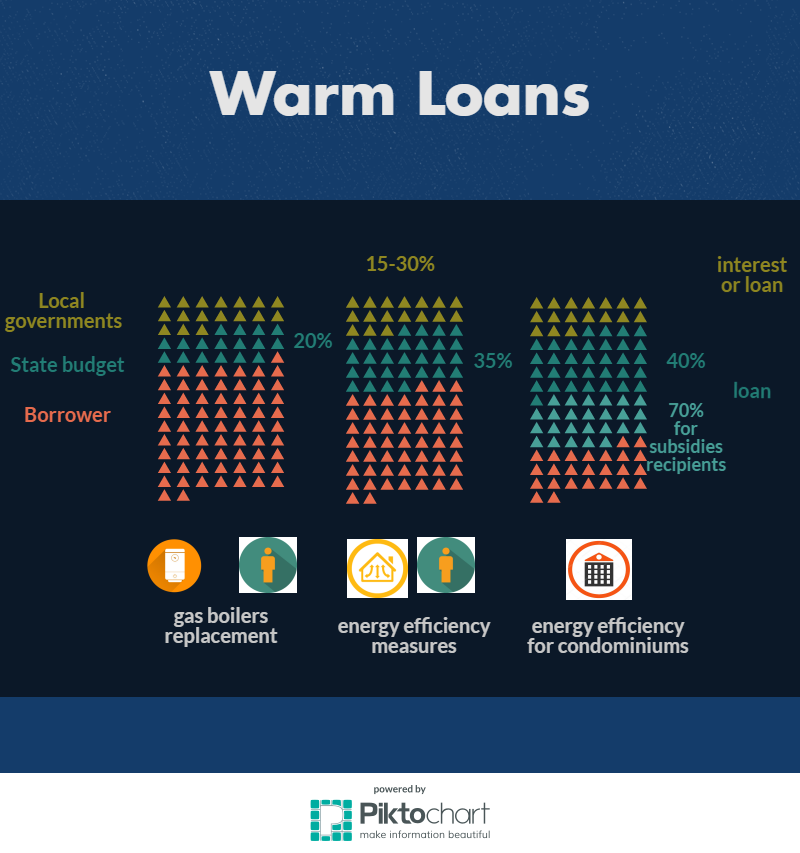 The scale of energy efficient improvements in residential sector is nonetheless moderate, if not meagre. In total, such a modernization requires about EUR 55b while in November 2014 – August 2016 Ukrainians took around EUR 135m of warm loans.

Recently Ukraine has enacted a law establishing Energy Efficiency Fund. It had a long story: while the EU and Germany pledged about EUR 120 million to its budget, the adoption of the necessary legislation was delayed. Most probably – due to vested interests in Ukrainian parliament, where some people are used to earn on energy inefficient country which consumes huge amounts of fuel.

When created, the Energy Efficiency Fund will work similarly to warm loans, but on a larger scale. It can become an efficient financial instrument to bring Ukraine to better energy efficiency level.

Energy efficiency is often called fifth or invisible fuel. Demand for it is particularly pressing for Ukraine. An average Ukrainian family living in multi-storey building consumes about 264 kWh/m2 of heat energy while the average European one – around 90 kWh/m2. About 3 out of every 4 m3of gas, the main source for heat production, are wasted because of inefficient boilers, boiler houses, and thermal power plants, poor pipes and building insulation. Now when gas price is set at the market level, savings and reduced utilities are particularly acute issues for every Ukrainian citizen. Energy efficient measures are helpful in this regard without affecting living standards; otherwise tenants freeze in their apartments only to save money. With reduced bills, the state expenditures on subsidies for households should drop.

Fifth fuel contributes to cleaner and safer environment: curbed consumption of gas and an increasing interest to renewables reduce carbon dioxide emission. Energy efficiency can result in new jobs creating more demand in energy audit of buildings and a construction sector, for instance. Consuming less of imported gas adds to energy security and independence of the country in general. 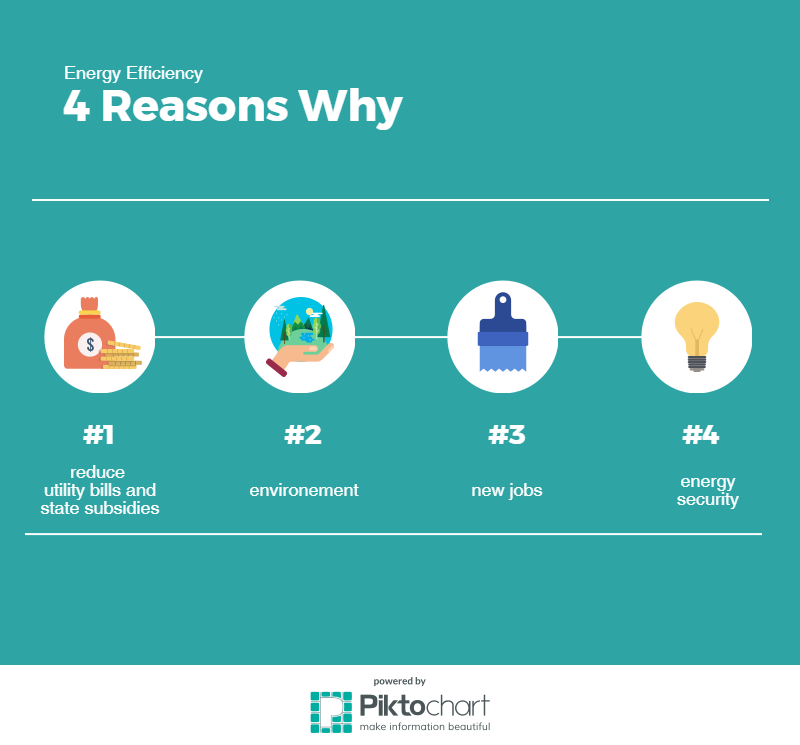 Some Ukrainians have found original solutions to make their houses efficient. In a village near Zaporizhzhia (South-Eastern Ukraine), one resident built a mansion out of empty bottles of a Ukrainian sparkling wine. The estate is like a thermos: it's not hot inside in summer while little heat lingers long in winter. 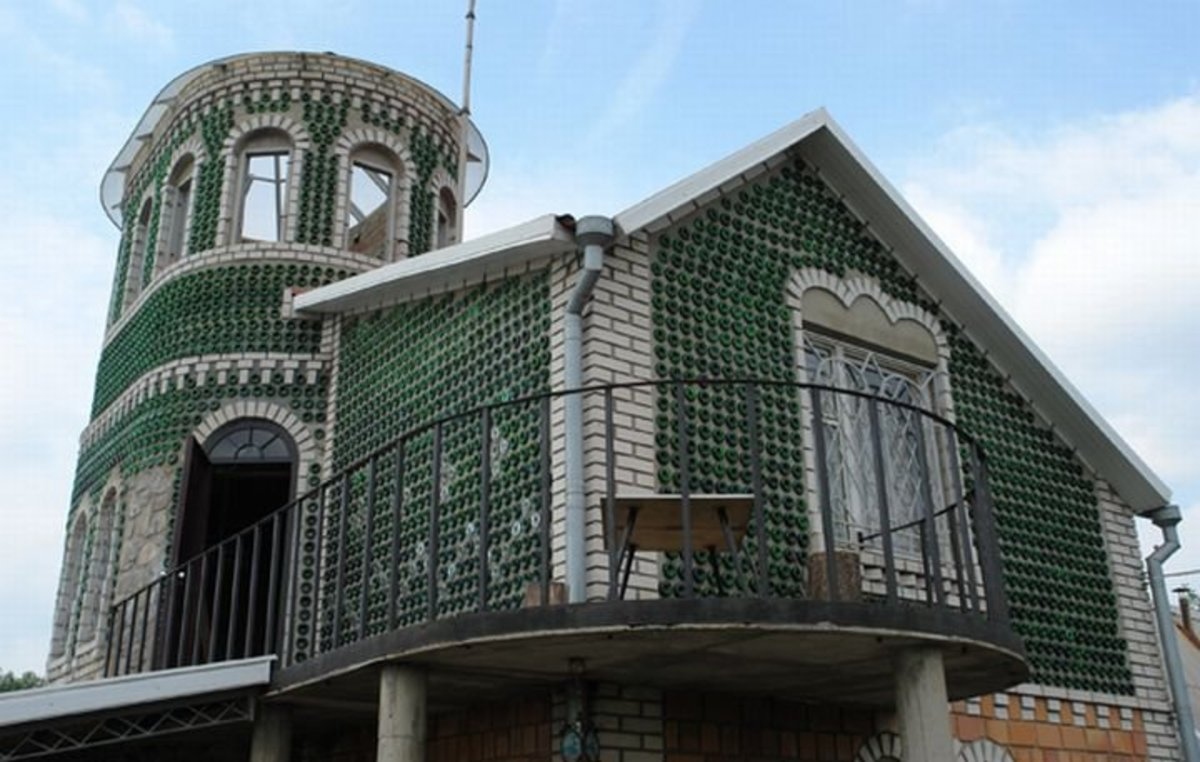 Ukrainian Life House Building company is constructing straw houses. Straw is a cheap material, it is not toxic and energy efficient. Buildings are built with orientation to the South, which further improves their heat preservation capacities. This type of houses, in fact, is a continuation of Ukraine's ancient tradition to construct dwellings out of straw and clay. When equipped with solar panels, they consume less power than produce; and the energy surplus can be sold out to the national grid.

PassivDom, another Ukrainian startup, accepts orders for a so-called "passive house". It's mobile: you can move it and live in remote places, in mountains or deep inside a forest. Framing is printed by a 3D-printer: the absence of joints, as a result, enhances insulation and heat preservation capacities. There are solar panels on the roof. Grey water filtration system ensures autonomy from water supply: wastewater is reclaimed.

The house is smart: it checks out the weather and autonomously adadjusts indoor temperature; it recognizes when you are approaching to the house and switches on some systems before you open doors; it nonetheless allows you to manually control light, temperature, and alarm through your smartphone app.

To save energy, dwellers should control their consumption. A Ukrainian startup Ecoisme has developed a kit that controls your energy consumption and spendings, suggests optimization options, and notifies via mobile application when you have left an iron or a hair straightener on.

The company is hired by Dubai to develop a device informing dwellers about their energy consumption and spendings as well as about energy efficiency measure to be taken.

Boiler, heater, washing machine, dishwasher, and air conditioner – all are energy-intensive and frequently used appliances. Some dwellers in Ukraine have day/night meters to differentiate energy consumption between day and night. Doing laundry or heating water at night, they pay half of a daytime rate. This, in addition, should reduce pressure on energy infrastructure at peak times.

Only several weeks ago Ukraine adopted laws obliging residents to install meters for energy consumption control and regulating energy audit of buildings. The latter is to be put into effect in 2018. Remains to be seen how this legislation will be implemented and what results it will deliver. Ukrainians would have even more incentives to curb consumption when they could choose among competing providers. The relevant legislation is yet to be passed by the parliament.

But let's look at Dolyna, a western Ukraine's tiny town. A brand new five-storey building with a pink façade stands out against other grey, sometimes shabby constructions. It has a good insulation, and residents consume 50% less of gas now. They paid only UAH 5ths (EUR 167) for modernization. The remaining UAH 17ths (EUR 567) were delivered by the EU within the Covenant of Mayors programme. And it's only one out of 40 residential buildings to be insulated.

Dolyna is a model of energy efficient town. Wood, instead of gas, is used to heat 70% of public buildings. The hospital is refitted with glazing windows, new doors, insulation. Solar panels, funded by the Nordic Environment Finance Corporation – NEFCO, heat water in a kindergarten. A boiler is just a back-up for a gloomy weather.

Ukraine slowly starts to refit and even construct new, modern public premises. Antonivka, in the Southern Ukraine, surprises with its green school. This is the only energy self-sufficient school in Ukraine. There are solar panels on the roof, energy efficient light, and insulation. Its construction was co-financed by NEFCO, the government of Finland, and local authorities.

Street lighting is another public good to become more energy efficient. On the left bank of Dnister river, thanks to co-financing of the Covenant of Mayors, incandescent bulbs of street lights in the Western town Sambir are swapped for the LED ones. 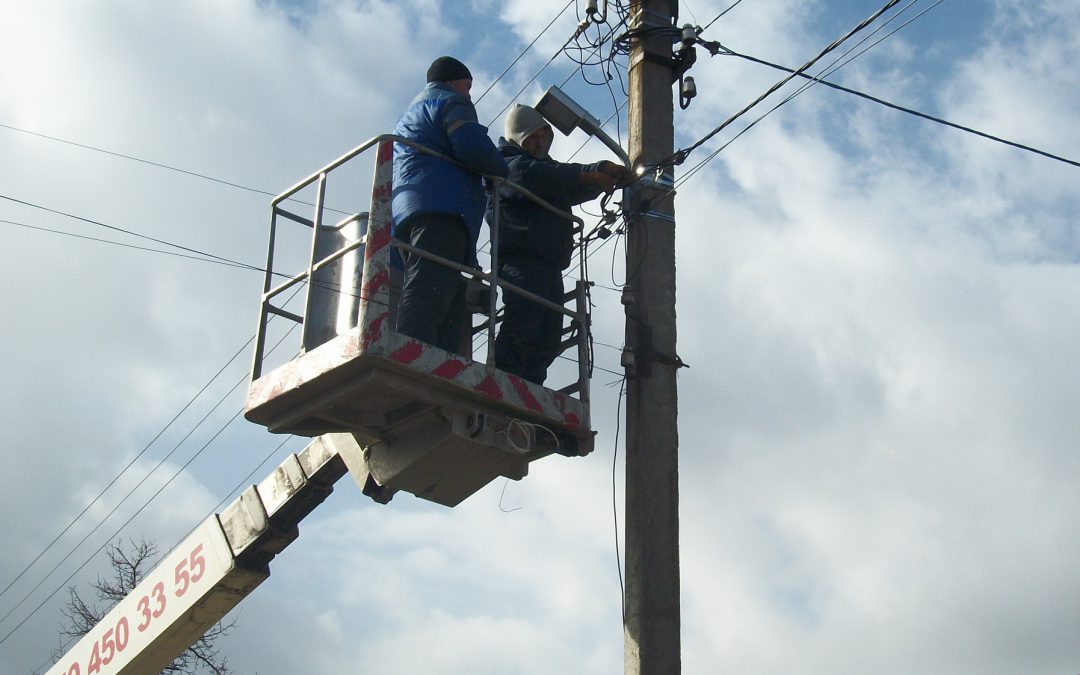 Cheap and clean energy, innovative solutions without sacrificing living standards – this is all about fifth fuel. It's subtle and invisible in itself, but real and tangible when it comes to family budget, climate change, and people's consciousness.There is one more way to make public sector more energy efficient. Not a single cent of taxpayers' money was spent for boilers at schools in Popivka and Zubivka villages in central Ukraine. Energy-service companies, known as ESCOs, didn't bill the schools. ESCOs earn on difference between utility bills before and after modernization. This make them willing to achieve high possible level of energy efficiency. In 2016, 19 energy service contracts were made in Ukraine.

Ukraine, one of the least energy efficient countries in Europe, is gradually moving in this direction. Progress is already visible in some places, although it is still not a game-changer. Too many problems remain, and more should be done to make it a country-wide trend. We will see in the coming years, if these local stories become a real national success.

Energy consumption by appliances
Infogram
Ruslan MINICH
An analyst at Internews Ukraine and at UkraineWorld, an information and networking initiative
Next article

Here Is How Decentralisation Changes Ukraine

More funds for education, healthcare, and infrastructure in local communities - these are only few of decentralization`s effects on modern Ukraine.
PODCAST
January 14, 2018