October 31, 2018
Since Russia annexed Crimea in 2014, Moscow and its proxies have put dozens of Ukrainian and Crimean Tatar political prisoners behind bars. However, there are many other people in Russian prisons who have been incarcerated for their unwillingness to bow down to Russian President Vladimir Putin’s regime. 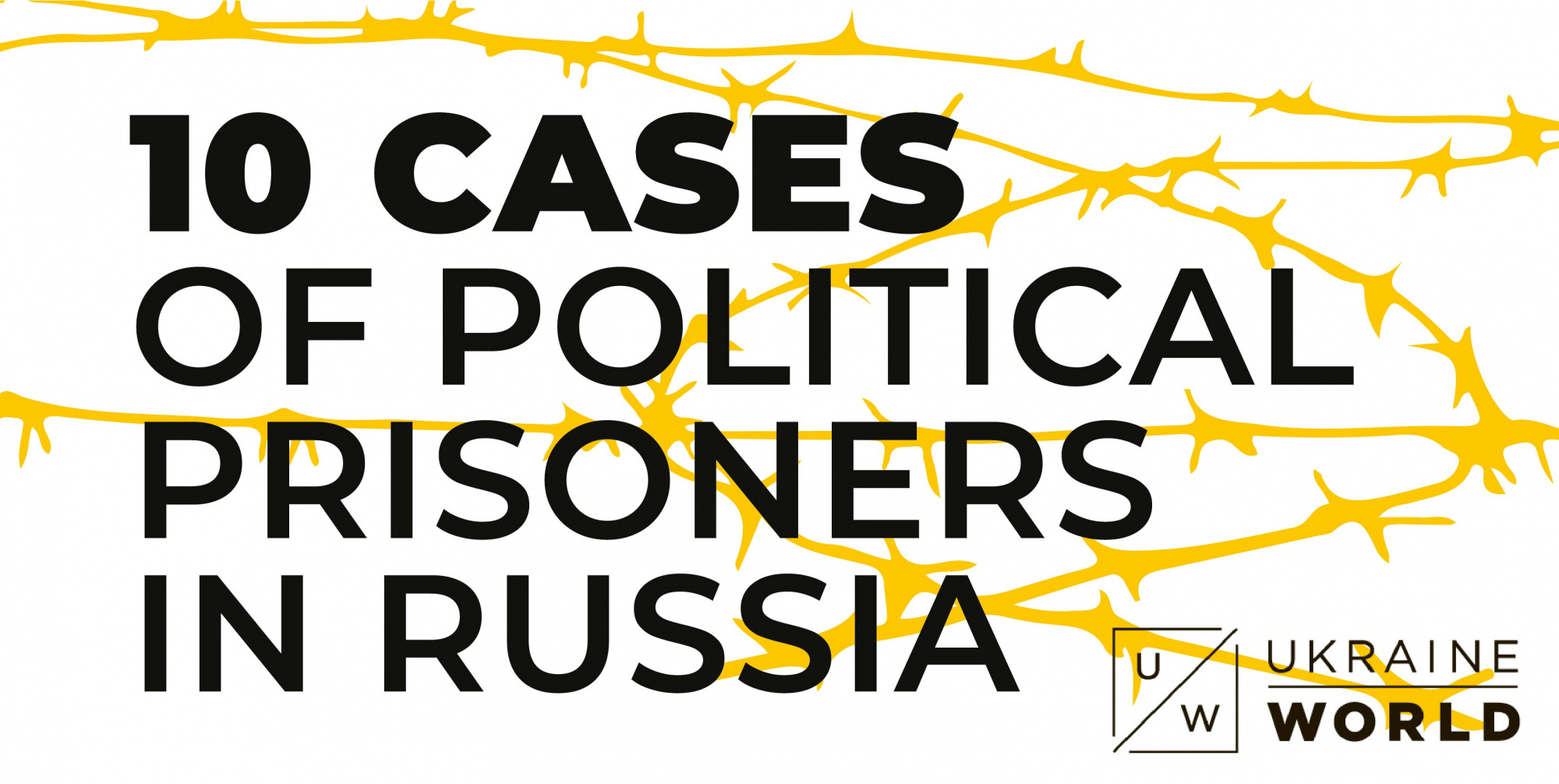 The fabrication of these cases has been refined in Russia's courts. There a court does not need real evidence, just an order from above. The evidence and all other case-related elements can be carelessly thrown together, as the details don't matter. Moreover, Russians can hold people in pre-trial detention centers for years without trial.

The number of political prisoners in Russia has been growing in recent years, and this is unlikely to change. More interference and pressure from the international community is necessary, as this has proven to be the only factor which secures the rare and occasional release of political prisoners. 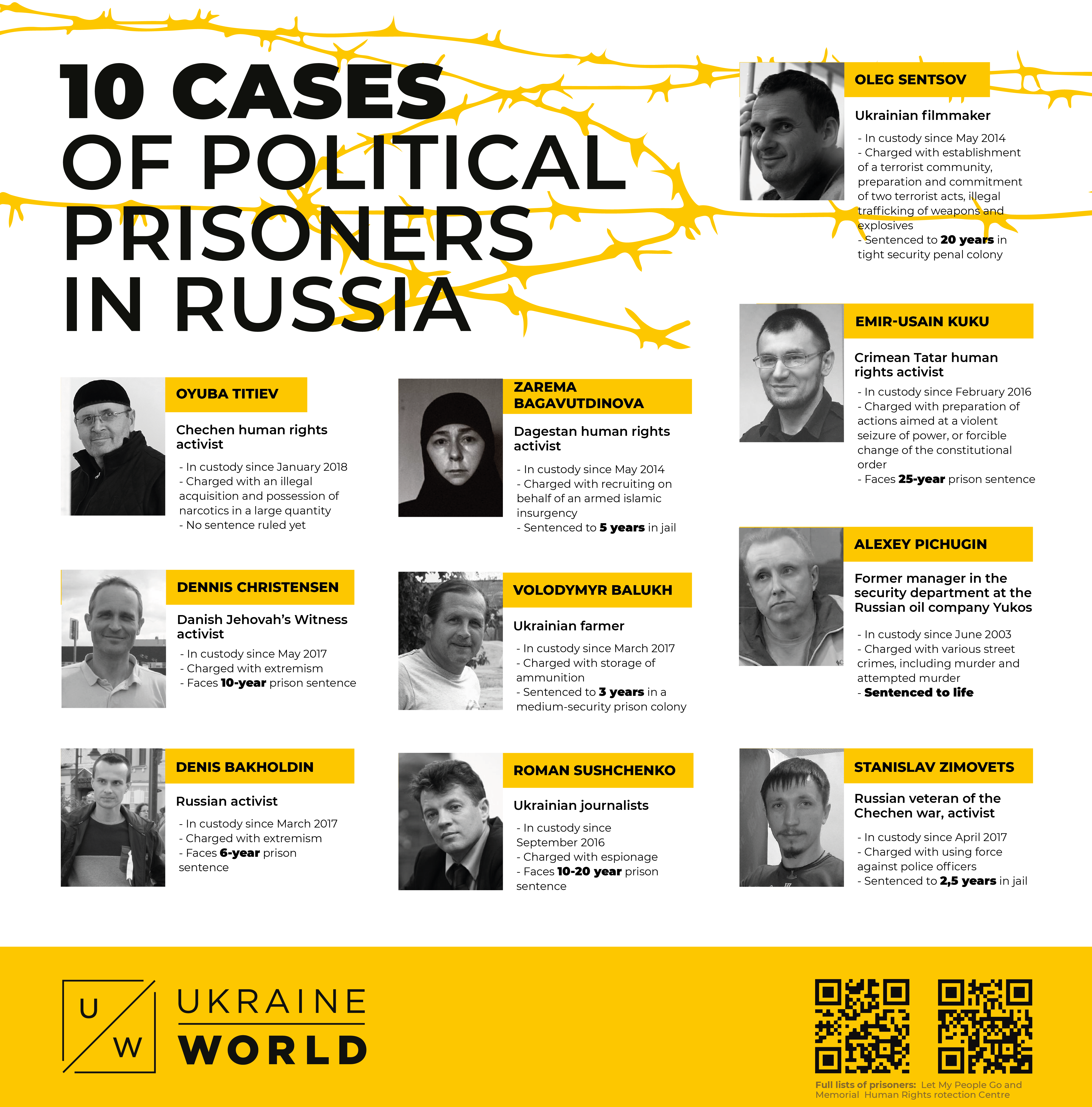 Ukrainian filmmaker Oleg Sentsov was arrested in Simferopol, Crimea, on May 10, 2014, originally without any accusations against him. Thirteen days later, he was illegally transferred to Russia. Sentsov was then accused of plotting and executing terrorist activity in Crimea as part of the so-called "Crimean Four" group. Eventually, the Russian court sentenced him to twenty years in prison in a tight security penal colony in Siberia, even though the prosecution had no evidence. Sentsov recently spent 145 days on hunger strike trying to achieve his goal of freeing all political prisoners in Russia, but he had to halt his strike on October 6 due to the threat to his life and imminent force-feeding. More about Oleg Sentsov

Ukrainian farmer Volodymyr Balukh was accused of illegally storing ammunition and explosives. His lawyers have proven that all the evidence against him was planted. In reality, Balukh was detained because he refused to take Russian citizenship, kept raising the Ukrainian flag above his house, and hung a plaque with the inscription "Street of the Heroes of the Heavenly Hundred" on its wall. Balukh was held in custody for a year and was then placed under house arrest. However, on January 16, 2018, he was taken into custody again. In July he was sentenced to three years in a medium-security prison colony in Crimea. He has been on hunger strike since March 19, but suspended it on October 9 while he was being transferred from Crimea to a prison colony in Russia. More about Volodymyr Balukh

Danish citizen and Jehovah's Witness activist Dennis Christensen was detained in the Russian town of Orel in May 2017. He's not the only one: more than twenty other activists of this religious movement have been detained, ever since the Russian Supreme Court declared Jehovah's Witnesses an "extremist" organization in April 2017. Christensen is charged with "organizing the activities of an 'extremist organization.'" He faces up to ten years in prison. More about Dennis Christensen

Crimean Tatar human rights activist Emir-Usain Kuku was arrested in February 2016 along with five other people; his crime was being part of the religious-political Muslim organization Hizb ut-Tahrir. Russia has recognized it as a terrorist organization since 2003, but it was legal in Ukraine before the annexation of Crimea in 2014. Prior to his detention, Kuku was severely beaten by FSB operatives for his work as a human rights activist. Now Kuku is being held at a pre-trial detention center in Rostov-on-Don and is charged with "preparation of actions aimed at violent seizure of power, or forcible change of the constitutional order." If convicted, he could spend up to twenty-five years in a Russian prison. More about Emir-Usein Kuku

A Russian citizen and a veteran of the Chechen war, Stanislav Zimovets has been held in custody since April 2017. As an activist from the nationalist Resistance movement, he took part in public protests held in March 2017. Zimovets was charged with using force against police officers and sentenced to two-and-a-half years in jail. More about Stanislav Zimovets

Bagavutdinova was a member of the Dagestan regional human rights group Pravozashchita (Human Rights Defense). In May 2014, she received a five-year sentence on charges of recruiting on behalf of an armed Islamic insurgency in the region of Dagestan, even though the evidence against her is contradictory and insufficient for judgment. It is most likely that Bagavutdinova's human rights activism was the real cause. More about Zarema Bagavutdinova

Oyuba Titiev, the head of the Chechen branch of the human rights organization Memorial, was detained in January 2018. He has been charged with illegal acquisition and possession of narcotics in a large quantity, as a package of marijuana was planted in his car during a search. The reason for his detention is clear: for a few months prior to the detention, Titiev and his colleagues in Chechnya had been working on the high-profile cases of twenty-seven residents of the republic who were detained and subsequently disappeared. More about Oyuba Titiev

A special correspondent for Ukraine's state-owned news agency Ukrinform in Paris, Roman Sushchenko was detained by the FSB during a private visit to Moscow in September 2016. Neither the Ukrainian embassy in Moscow nor his family nor Ukrinform were immediately informed of his detention. It was only later that Sushchenko was accused of espionage, and he faces up to twenty years in prison. The website Let My People Go believes that Sushchenko "might have been detained due to his last interview." That conversation, which has not been published, was about the opening of the Russian Spiritual and Cultural Center in Paris, which many regard as a tool for the Kremlin's covert operations in France. More about Roman Sushchenko

A former manager in the security department of the Russian oil company Yukos, Alexey Pichugin was detained in 2003 along with Mikhail Khodorkovsky and Leonid Nevzlin. The company has been targeted and expropriated by Putin's clan, as Khodorkovsky and Nevzlin had been increasingly active in opposition politics and civil society. Pichugin is one of the first political prisoners of Russian modern history. Since 2003 he has faced multiple trials, which the European Court of Human Rights ruled as unfair and in violation of his human rights. He was sentenced to life imprisonment in a special-regime penal colony. More about Alexey Pichugin

A Russian citizen who publicly opposed Russia's aggression in Ukraine, Denis Bakholdin was detained ten times during peaceful protests in 2014. At the end of 2014, Bakholdin moved to Ukraine. In March 2017, he tried to return to Russia to see his mother, but was arrested. Prosecutors accuse him of being a member of Pravyi Sector (Right Sector), a Ukrainian far-right organization which has been banned in Russia since 2014, although there is no proof to support this claim. Bakholdin is being held in a pre-trial detention center and faces up to six years in jail. More about Denis Bakholdin

On October 1st, Ukrainian President Volodymyr Zelensky announced that Ukraine has agreed to the so-called “Steinmeier formula”. This formula is a point of one...
PODCAST
September 17, 2020