Ukraine’s Elections on Facebook, Instagram and VK: What Ukrainian Users Think About the Top Parties and Leaders

July 19, 2019
With the Ukrainian snap parliamentary elections race coming to an end, Ukrainians are using the most popular social networks to react actively to the news around the 5 top-rated parties. In order to understand what was happening on Facebook, Instagram and VK around the parliamentary elections campaign, Internews-Ukraine and Singularex analyzed the three most popular social networks in Ukraine. 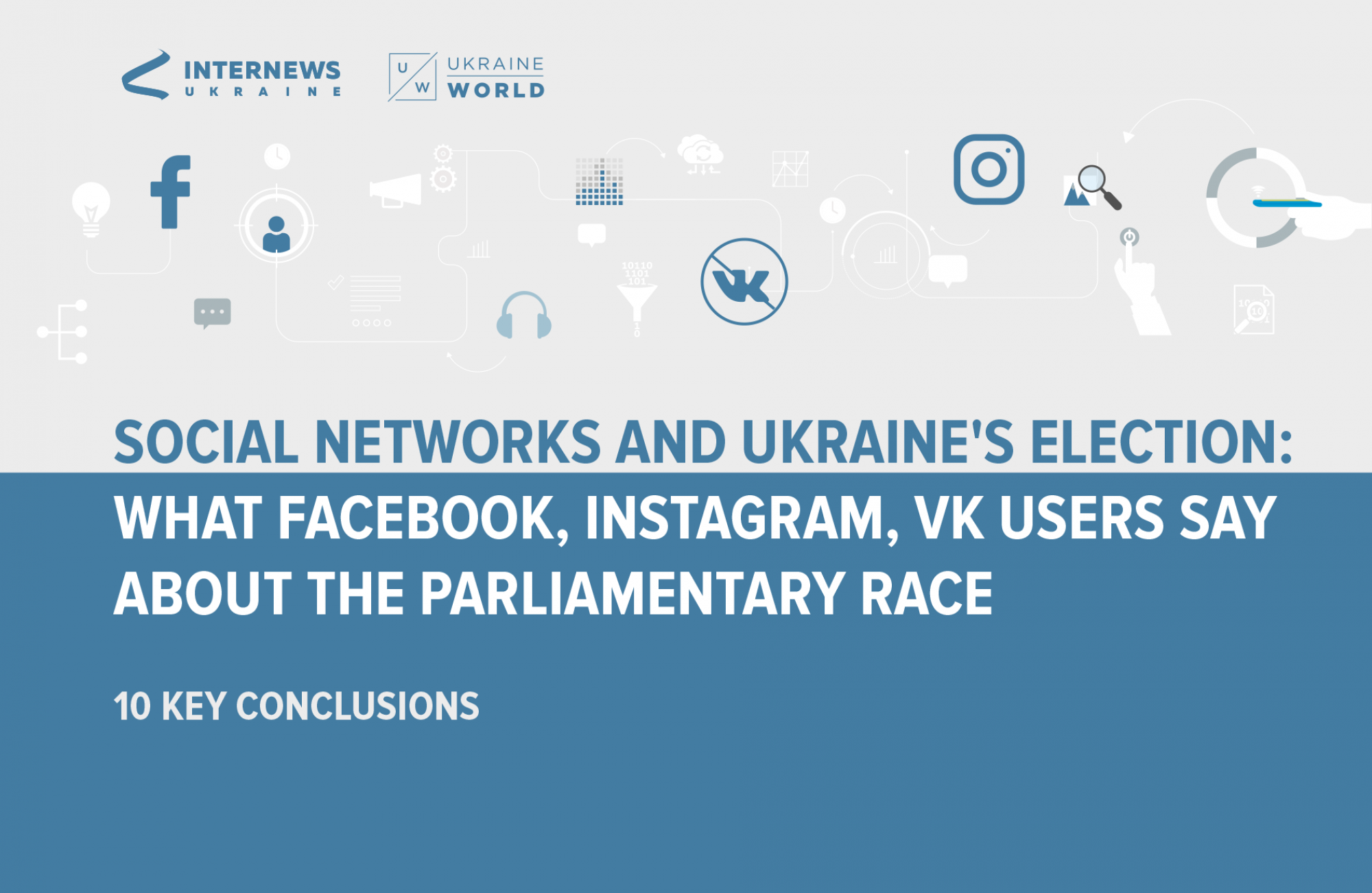 Since the start of the parliamentary elections campaign, the Ukrainian segment of Facebook, Instagram and Russian VK resonated quite closely with the actual ratings of the five most popular political forces, namely Servant of the People, Opposition Platform, European Solidarity, Fatherland and Holos. Despite the fact that VK remains one of the most popular social networks in Ukraine, its popularity has decreased significantly since sanctions were imposed on it by Ukraine in 2017. Today, less than 7 million users are active in this network. Instead,Facebook and Instagram show a steady growth of audience. Around 13 and 11 million Ukrainian users (as of March 2019) are active in these networks, respectively.

In order to find out what has been happening to the FB, IG and VK in relation to Ukrainian political parties and their leaders, we analyzed:

The research was carried out upon an initiative by the NGO Internews-Ukraine in the period from May 1 to June 17, 2019. We used Neural Networks and methods of Artificial Intelligence, namely:

Here are our 10 key conclusions:

Facebook, Instagram and VK are very different. They serve as platforms with different practices, views and opinion leaders. While Russian narratives are dominant in the Ukrainian segment of VK, Instagram is totally under the control of Zelensky and his Servant of the people. In this vein, Facebook is more complicated. As a place of maximum plurality, it also creates an illusion where the correlation between political forces and their key opinions on Facebook is far from the real electoral landscape. Nonetheless, Facebook remains the most politicized social media in its Ukrainian segment. Here, one in every five Ukrainian users posted something related to the parliamentary elections campaign. What unites all three social networks is their capacity to keep like-minded users in those echo chambers where their opinion reigns. While Facebook is the most evident in these terms, VK traps people’s minds via popular groups and opinion leaders. In Instagram, one lives in the kingdom of hashtags and tags that the person is interested in. 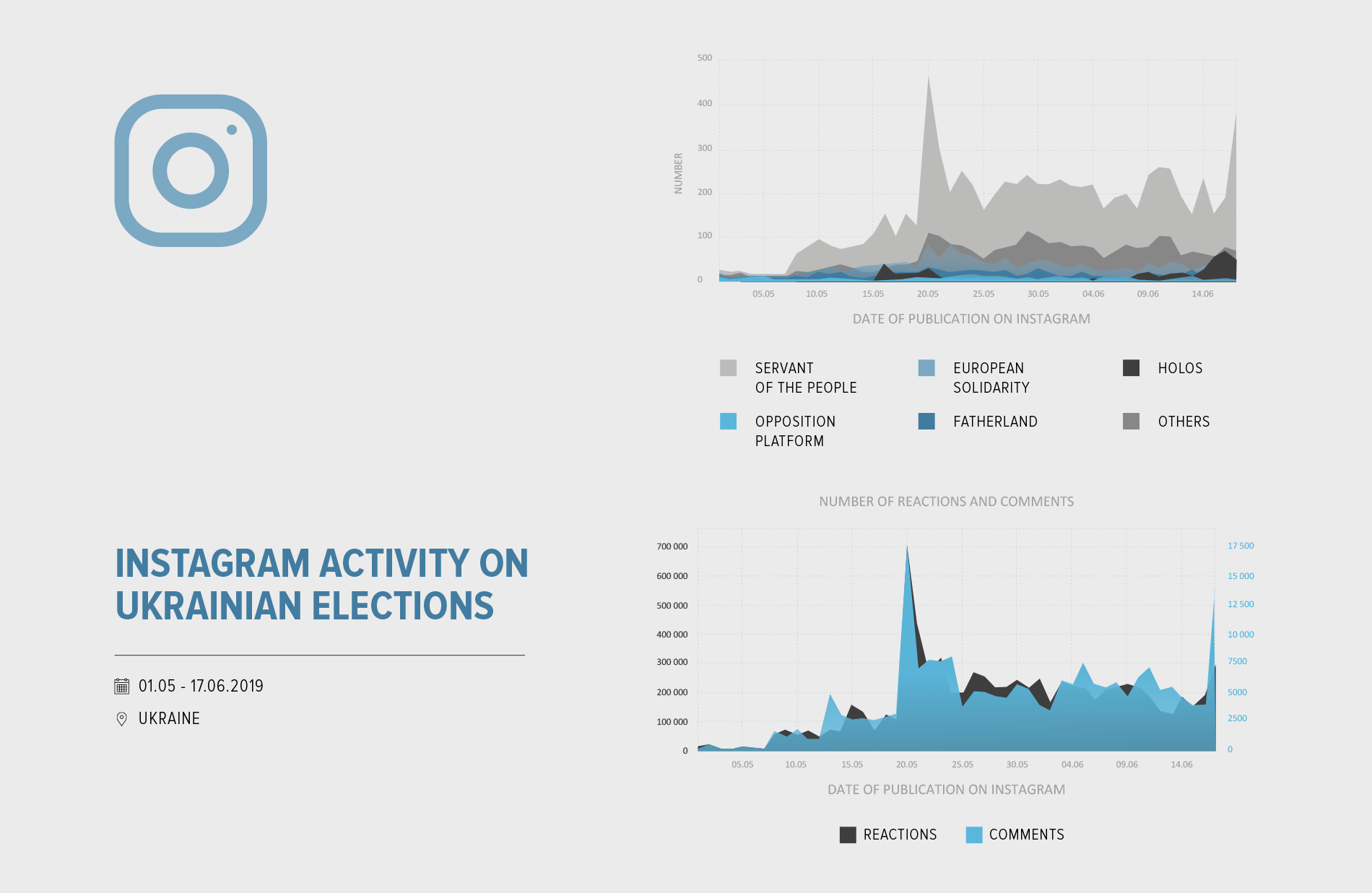 All three social networks have responded actively to political events in Ukraine. In VK, Facebook and Instagram the number of posts devoted to the election sharply increased immediately during Zelensky’s inauguration ceremony on May 20. Compared to early May, on inauguration day itself, the number of posts on VK and Facebook has almost tripled, while the number on Instagram increased sevenfold. While the dynamics of Instagram and VK subsequently declined, Facebook users continued to be active regarding election-related topics. On average, there were about twice as many posts on Facebook than before the inauguration (approximately 1,200 posts). VK only got a quarter more posts instead (250 posts on average). Against this backdrop, a surge in the dynamics of posts and reactions after June 10 was also сlear. This trend probably correlates with the publication of new polls, the purchase of the ZIK TV channel by Medvedchuk’s allies, the granting of Russian passports to residents of Donbas or the meeting between Volodymyr Zelensky and Emmanuel Macron. 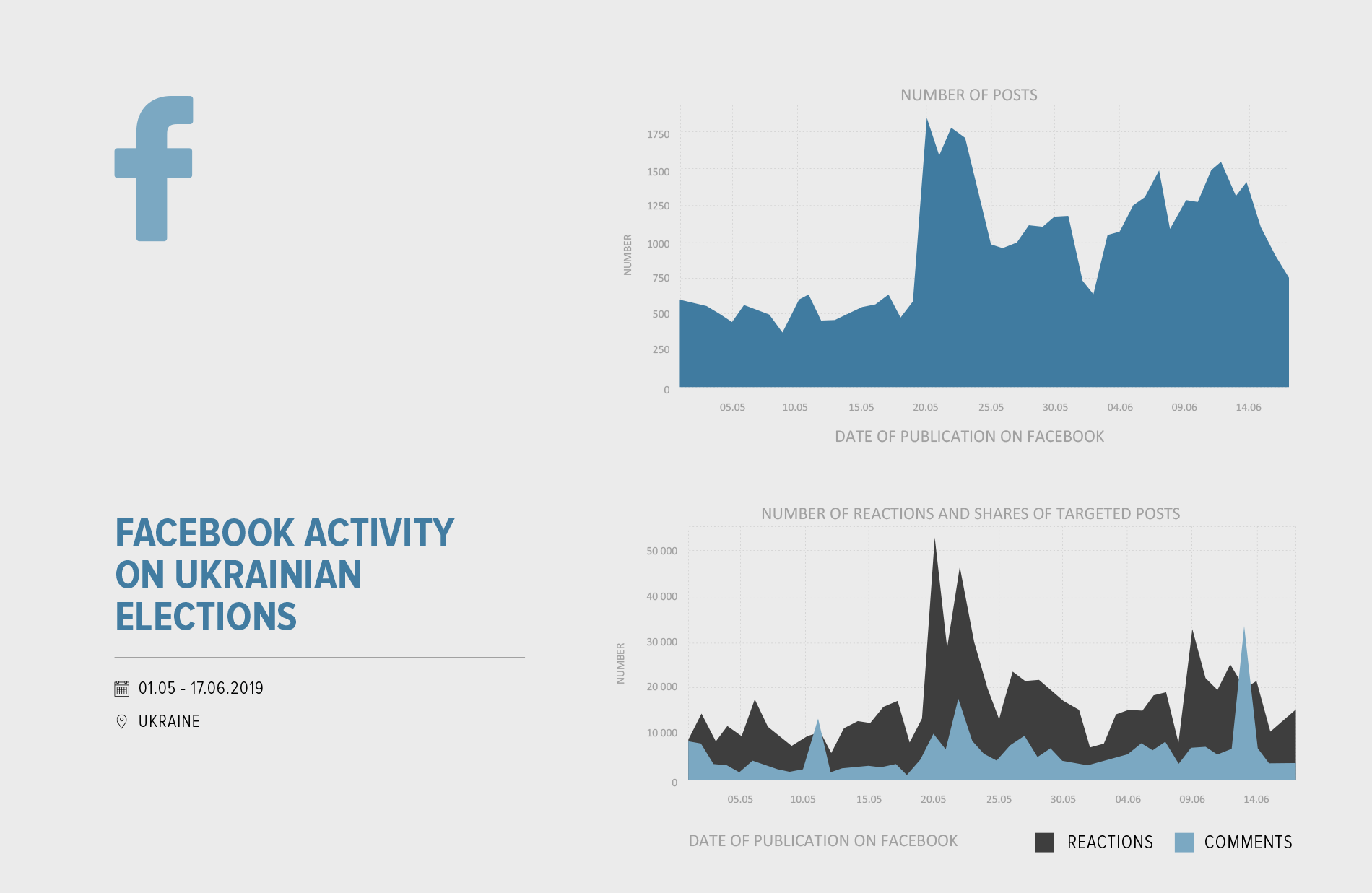 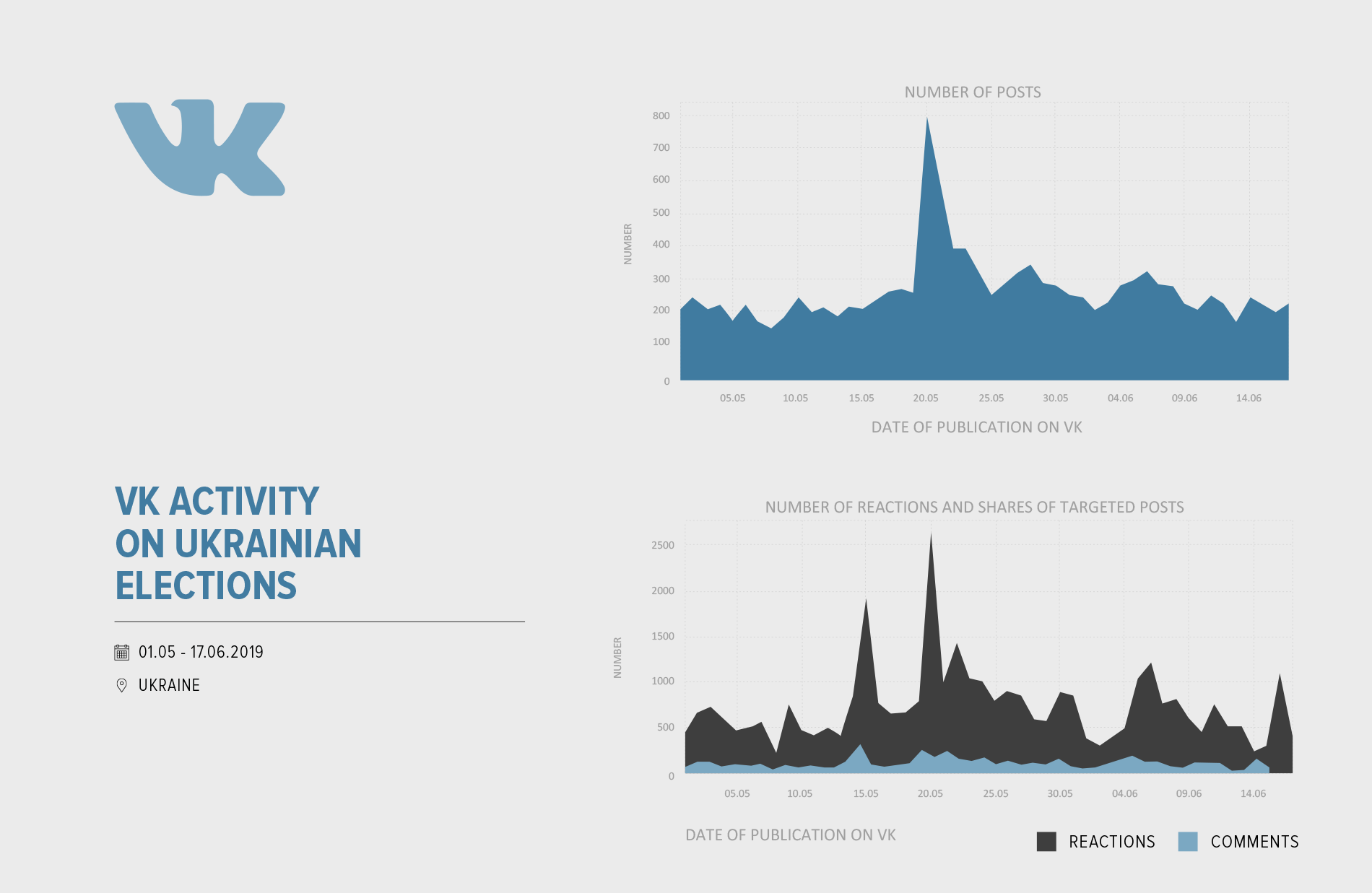 On those social networks where people express and discuss opinions, namely Facebook and VK, negative rhetoric with regard to Ukrainian politicians prevails. In VK, a Russian social network, any Ukrainian political force that is an advocate of a sovereign and democratic Ukraineis usually despised and mocked. Therefore, negative messages about all Ukrainian parties outnumber the positive ones and sometimes even neutral ones. On Facebook, the situation is not much better. Nevertheless, the negative rhetoric still prevails over positive rhetoric with regard to all parties, except for Tymoshenko’s Fatherland. Negative rhetoric dominates in 42% of the posts analyzed, while positive rhetoric is found in just 15% of the posts analyzed. The Opposition Platform is the only party on Facebook which has a prevalent number of negative posts not only over positive ones but also over neutral ones. In the meantime, on Facebook, Svyatoslav Vakarchuk’s Holos party is regarded as the most neutral one. 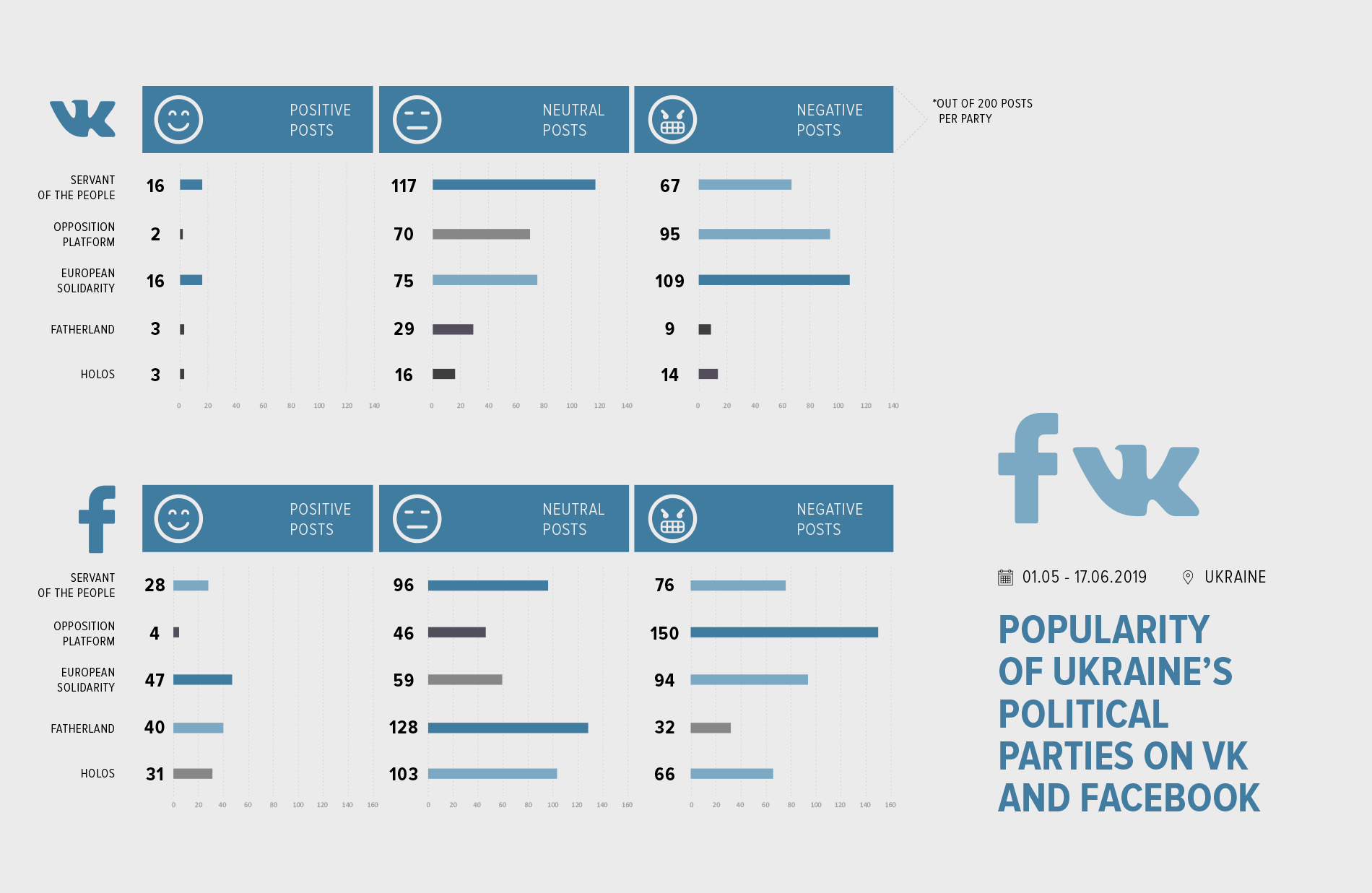 In our previous report, we have demonstrated that following the imposition of Ukrainian sanctions, VK became a zone of even more visible Russian propaganda. The present stage of our study confirms this conclusion. In the context of Ukrainian elections, the authors of the most popular posts include former members of the Party of Regions or openly pro-Russian political analysts. The most shared posts often come from popular groups that support Russia's actions in Ukraine and the self-proclaimed separatist republics. Although pro-Ukrainian users of VK are still visible there, mostly supporting Petro Poroshenko, they are largely lost in the ocean of pro-Russian or pro-separatist opinion leaders and groups. 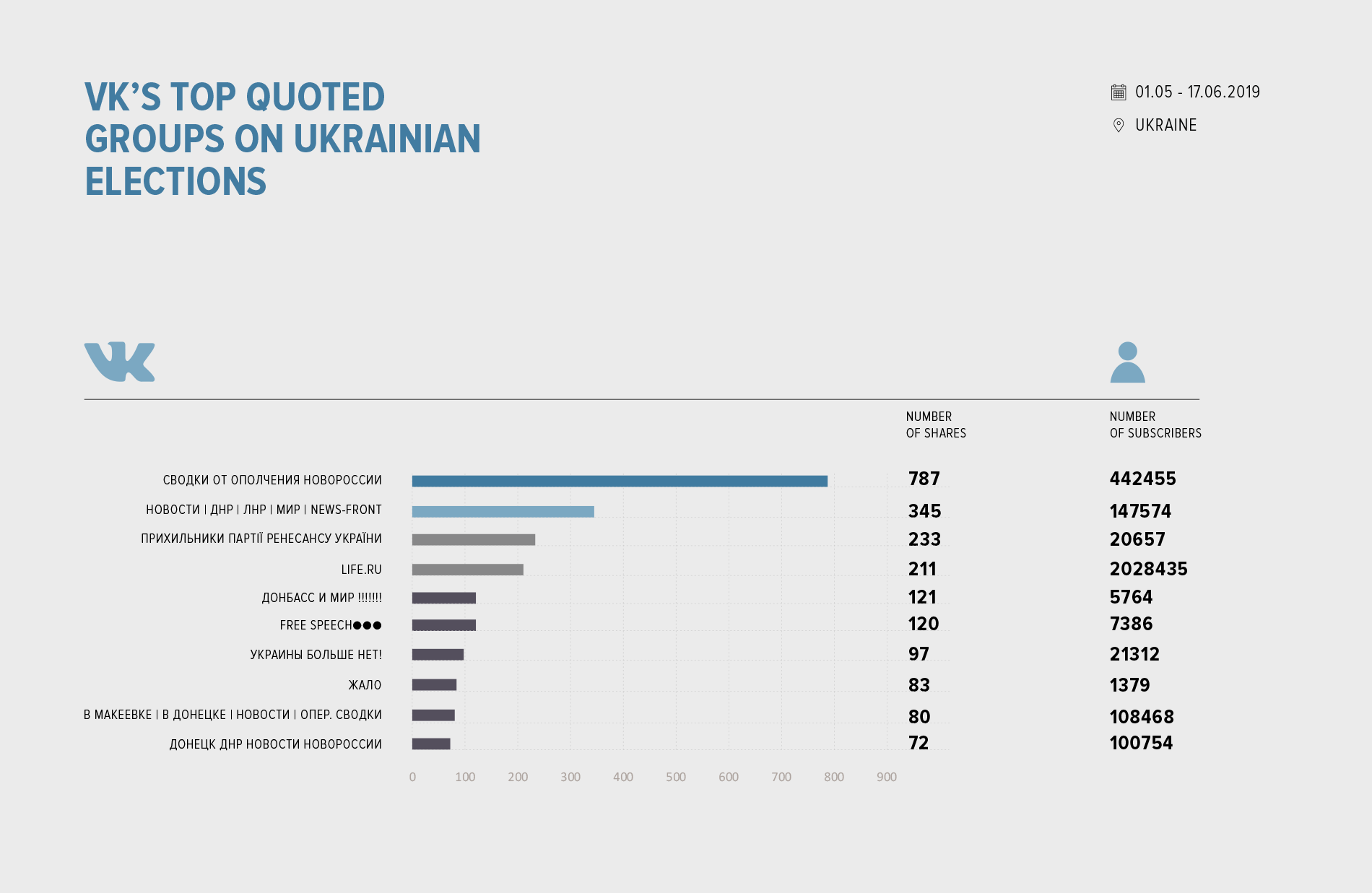 5. VK hates all Ukrainian parties, even those with "pro-Russian" rhetoric

6. Zelensky under attack by VK

Unlike Instagram (see below), the Ukrainian segment of the Russian network VK does not make life easy for Zelensky. In our previous study, we stressed the prevalence of negative rhetoric over positive rhetoric in posts about Zelensky, even though he had more positive coverage than other candidates on VK. However, this “critical” trend has intensified since then. Criticism of Zelensky grew in proportion to his statements and the first steps that contradicted Russia's stance on Ukraine. Also, the top posts on VK about Ukraine’s parliamentary elections include messages predicting the potential failure of Zelensky, noting his policy to be a "show". While fury against the fifth President of Ukraine has not dispersed yet, and he was largely criticised for his “destructive” rule, the pro-Ukrainian segment often sees Poroshenko as a patriot of Ukraine and a hero.

Among all the social networks, Instagram users are the most supportive of the Servant of the People. 82% of all unique IG posts refer to this party. Meanwhile, Poroshenko’s European Solidarity, which comes second, is mentioned in only 17% of election-related posts. Another interesting trend is seen in the "hashtag-network" of Zelensky supporters, where hashtags of his comedy show and studio Kvartal-95 are some of the most used ones. This partly explains the success of Zelensky’s campaign. Such hashtags succeeded in attracting Kvartal’s audience to Zelensky's political project, ensuring the migration of the "entertainment" audience to the "political" one. 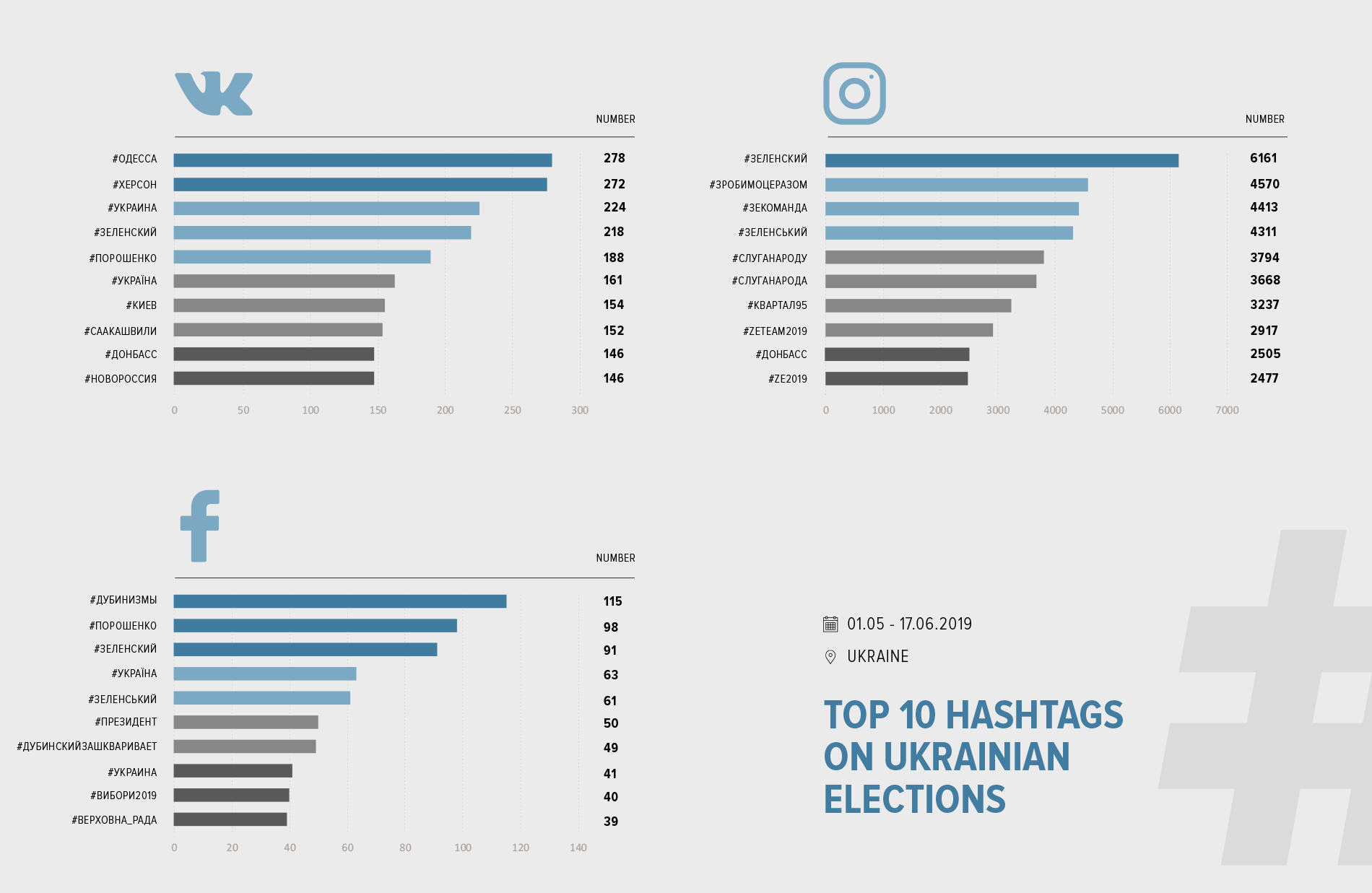 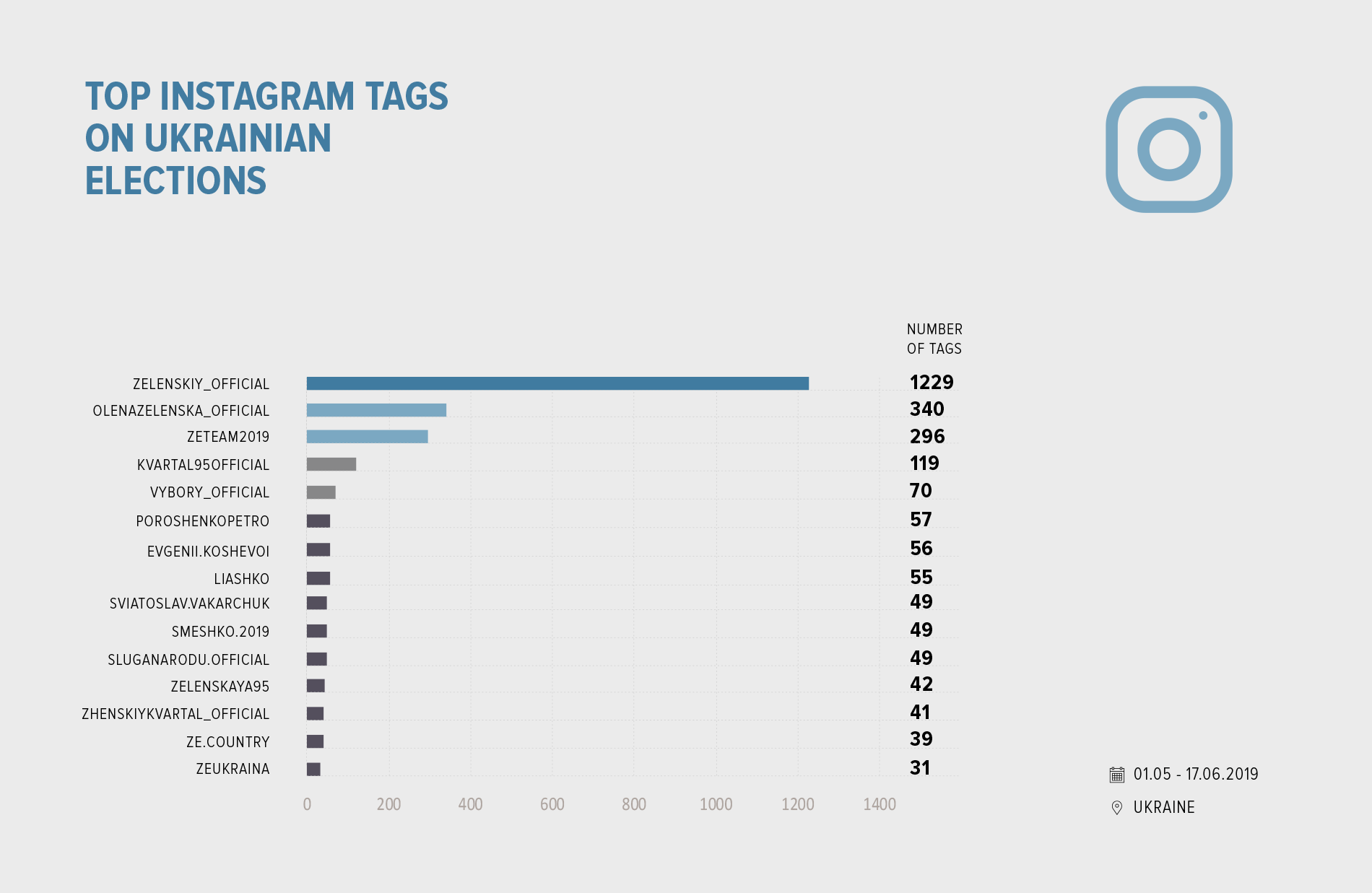 It was expected that Holos, a party led by Ukrainian rock singer Vakarchuk, would be able to challenge Zelensky in the young audience segment on Instagram. By mid-June, however, Vakarchuk had not succeeded. His party is mentioned in only 5% of election-related posts on Instagram. The same tendency has been clear in VK where Holos got very few reactions, as compared to its rivals. The late presentation of Vakarchuk’s party could be one of the reasons for this slow progress. In the next series of our study, we will see if Holos makes any step forward. 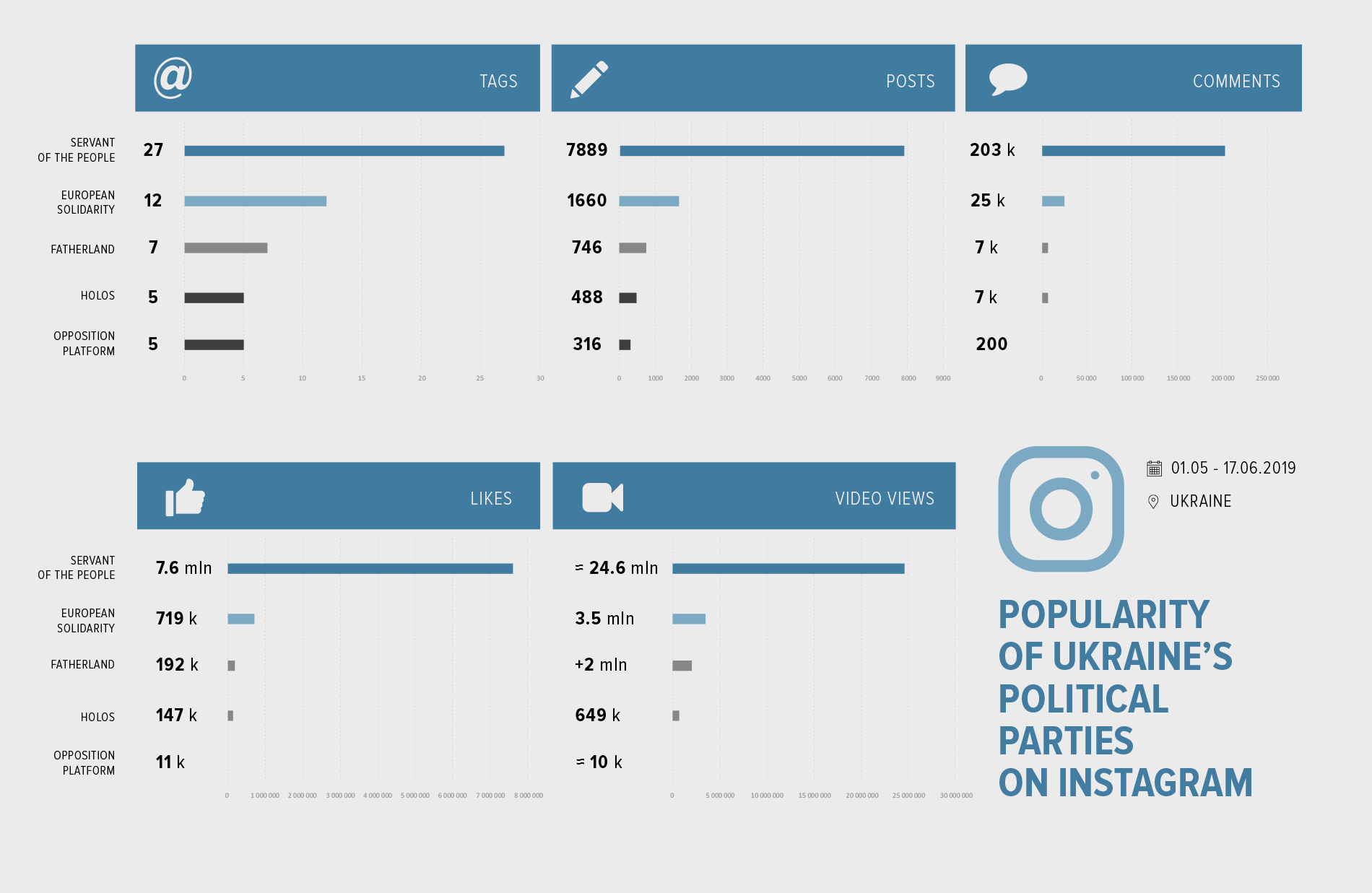 Zelensky against Poroshenko, "Ze" against "Po", 75% to 25%, “new faces” against “experience” - these are just a few examples of how trends of the presidential race still remain strong during the parliamentary election. Despite the fact that Zelensky enjoys the biggest attention on Facebook, his rivalry with Poroshenkohas not disappeared. Depending on the sympathies of a particular user, Zelensky and Poroshenko are either idealized or demonized. The idea of Zelensky as the people’s president and the new hope, counters the one of him as the president who does not respect Ukrainian law and resorts to nepotism. Meanwhile, Facebook users often refer to Poroshenko as a good president and, vice versa, as the one who ‘ruined’ Ukraine. Facebook provides ever less space for "common denominators".

10. Facebook provides a distorted picture of the balance of forces

Facebook’s diversity is both its advantage and its flaw. Facebook algorithms encourage the formation of "micro-groups" and "echo-chambers", creating an illusion of relative equality between supporters of various opinions. In reality, the balance of power in Ukrainian society is, particularly in real elections, completely different. 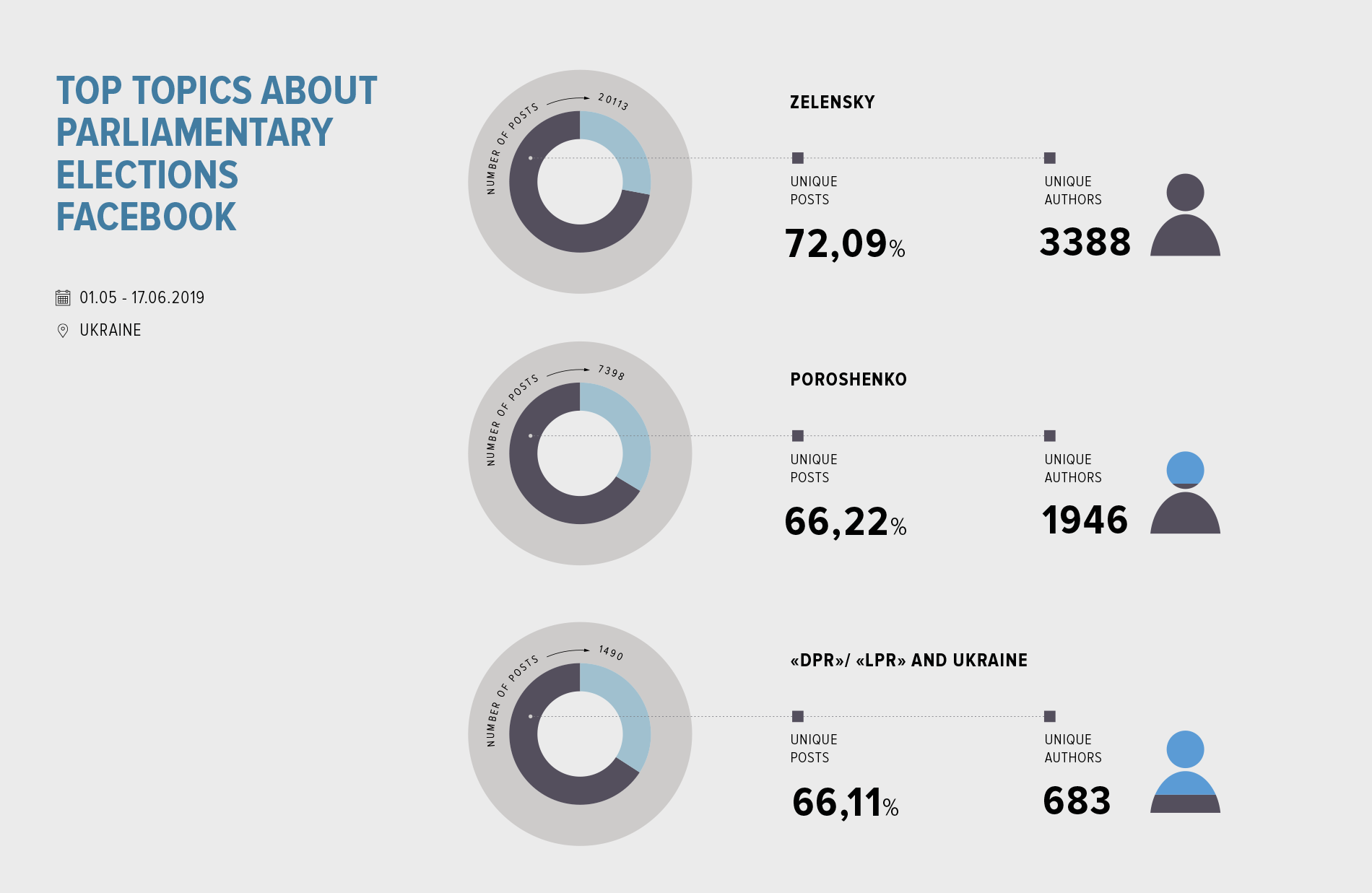 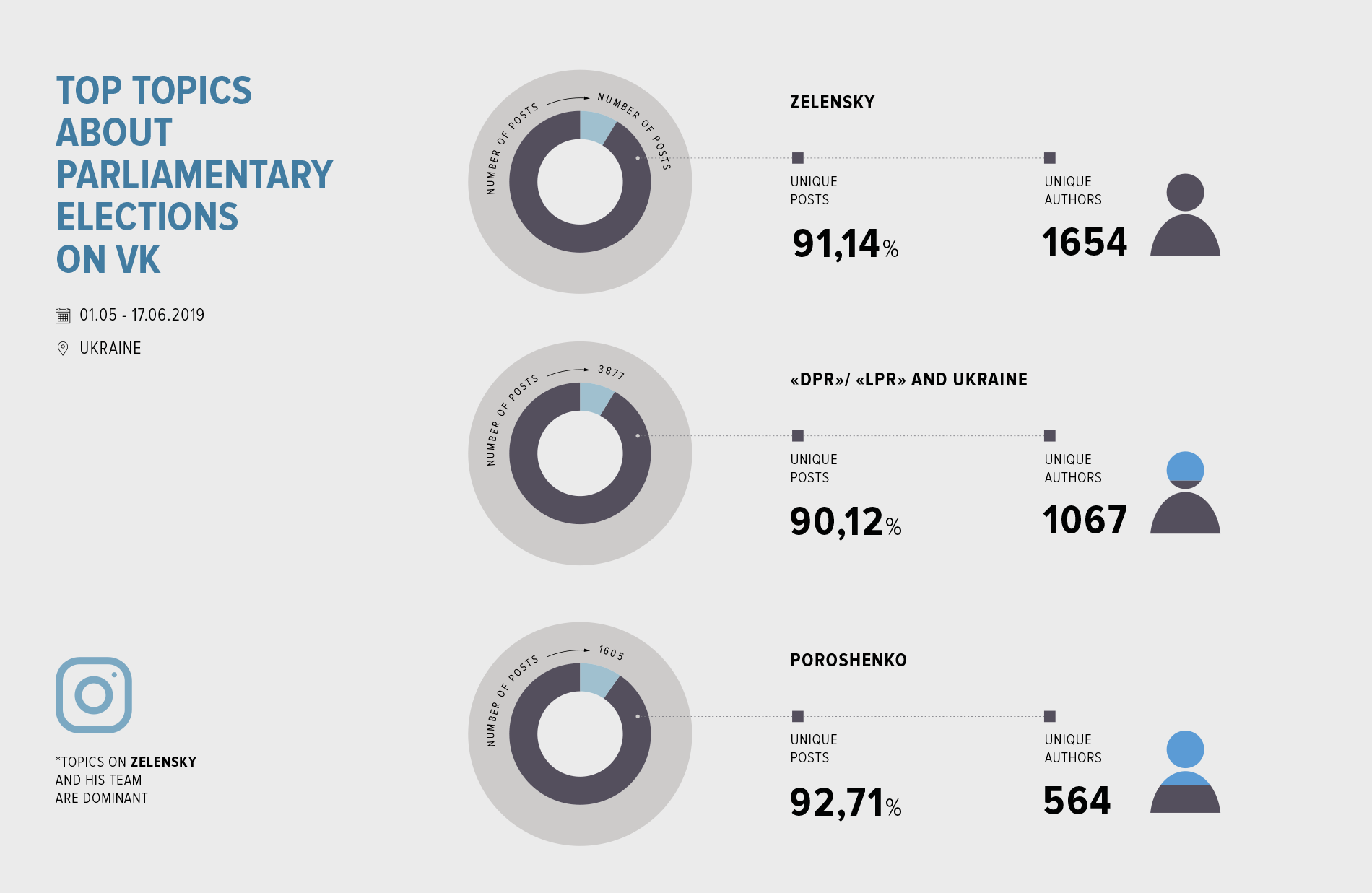 This research was possible with support of NGO Internews

Host Volodymyr Yermolenko (Ukraine World, Internews Ukraine) welcomes to the studio Peter Dickinson, a nonresident fellow at the Atlantic Council and publisher of...