May 27, 2021
The news website Strana.ua is popular both in Ukraine and Russia. This is partly due to the spread of narratives similar to those established by Kremlin propaganda. 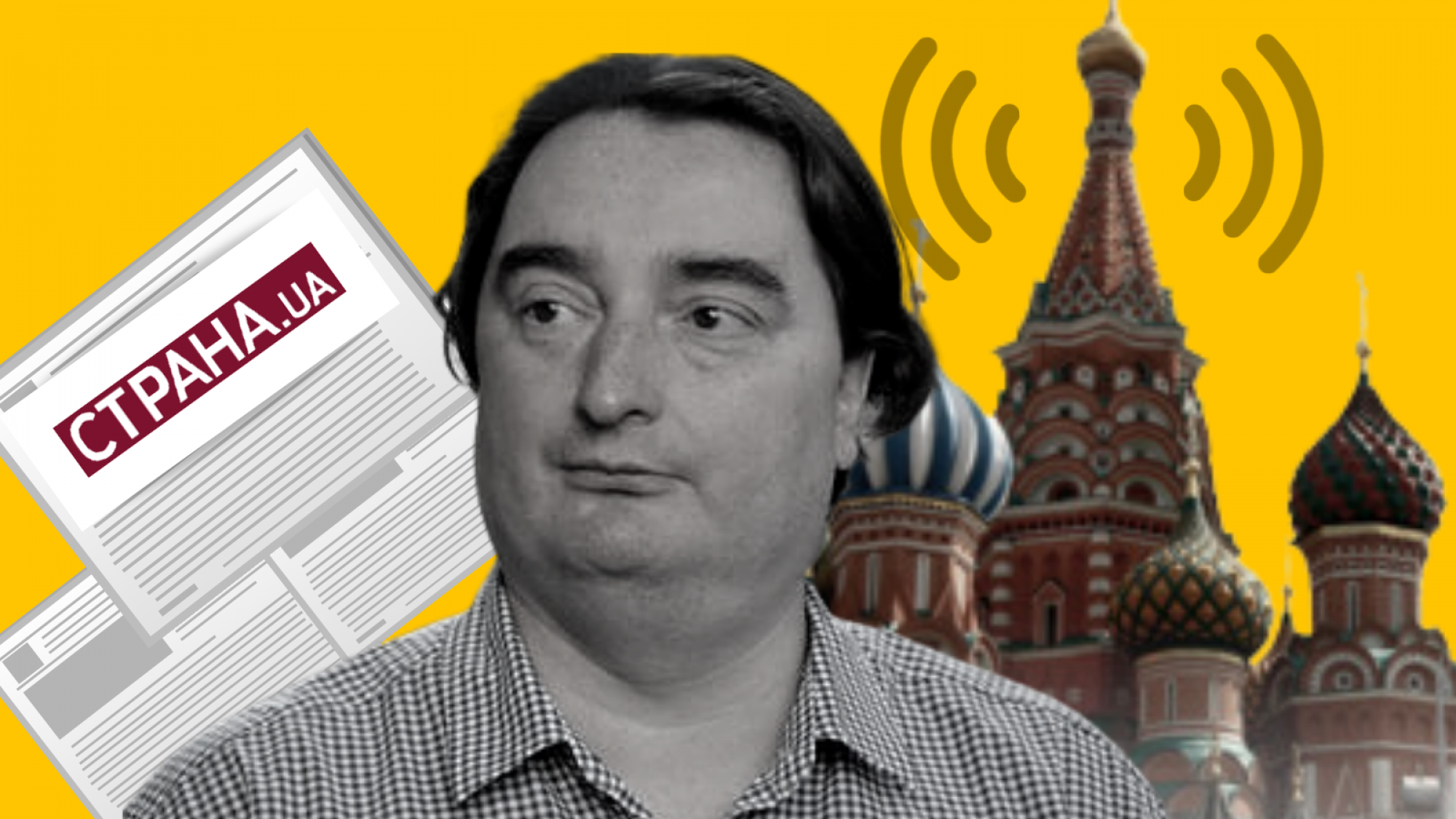 Strana.ua is one of the most popular news websites in Ukraine. According to data from SimilarWeb, it ranks 5th among Ukrainian news and media websites and records some 24.5 million visits monthly. However, it is popular not only with Ukrainian audiences. SimilarWeb also shows that 14.01% of the website's audience in April 2021 from computers (excluding mobile) came from Russia.

To put this in perspective, ukr.net, the most popular news aggregator in Ukraine, had only 0.4% of its visitors from Russia last month. Censor.net, pravda.com.ua and obozrevatel.com, the websites which were in second, third and fourth place in terms of popularity, have had 1.59%, 1.35% and 8.82% of their visitors from Russia in April 2021, respectively.

If one takes a look at websites that are the main sources of reference to Strana.ua, yandex.ua sits at the top with 52.25% of all links, while yandex.fr is in third place with 5.38%. These are the Ukrainian and French language versions of yandex.ru, a Russian news aggregator handled by Yandex, a Russian tech company that was sanctioned by Ukraine in 2017. Its website is available in Ukraine only via VPN or proxy servers. At the same time, it remains very popular in Russia and CIS countries.

So why is Strana.ua so popular in Russia?

The Roots of Strana.ua

Strana.ua was established in February 2016 by Ihor Guzhva, a journalist, former owner of Multimedia-Invest Group, and the former editor-in-chief of the newspaper Vesti. The founder of Strana.ua has links to the Russian Federation, where he had been working for a few years. Born in Donetsk oblast, Guzhva started his career in local media and primarily covered economic issues. In the early 2000s, he worked as a project coordinator at the Foundation of  Effective Policy in Moscow, an organization established by the political technologist Gleb Pavlovsky. After he returned to Ukraine, Guzhva became editor-in-chief of the Segodnya newspaper which belonged to Rinat Akhmetov, Ukraine's richest person. In 2012, he began work at the Moskovskie Novosti newspaper in Russia. However, it was a short-term gig, so in 2013 he returned to Ukraine and established Multimedia-Invest Group, a media holding company which included the Vesti newspaper, the website vesti.ua, Radio Vesti, and Vesti. Reporter magazine. According to information provided a few years ago by BBC Ukraine, investments in the project reached up to USD 50-70 million. Guzhva insisted that his media company had a few investors, none of whom had political interests in Ukraine. In 2015, after he had been detained under suspicion of tax evasion, Guzhva sold his share of Multimedia-Invest Group and shortly thereafter established Strana.ua.

Despite its West-sceptic and Europe-sceptic position which often echoes narratives of Russian propaganda, Strana.ua was the second most visited news website in Ukraine in September 2020 according to the Institute of Mass Information (IMI). The study showed that in 2020, Strana.ua strengthened its position among Ukrainian news websites and increased its audience. Moreover, the IMI found that Strana.ua linked to the Russian site smi2.ru more often than any other site, reporting that "every fourth reader who left the site 'Strana' in August switched to smi2.ru". Smi2.ru is a the website known for sharing which often shares Kremlin propaganda narratives.

Its narratives and authors also link Strana.ua to Russian narratives aimed at undermining public trust and Ukraine's Euro-Atlantic aspirations. One of the most spread narratives on Strana.ua claims Ukraine is under an external governance. In line with the pro-Kremlin media, Strana.ua disseminates a narrative about so-called "sorosiata" (roughly "Soros piglets") who aim to conquer Ukraine and "sell" it to Western billionaires like George Soros. One of its recent articles is titled "The Man Of Zelenskyi's Friend and "Soros Piglet" From Ukravtodor (the State Agency Of Roads Of Ukraine"): What Is Known About New Ministers Liubchenko And Kubrakov". However, the article itself provides no links between the newly appointed Infrastructure Minister and Western individuals or institutions.

Strana.ua often tries to picture Ukraine as a bargaining chip between Russia and the West. Its articles push the idea that Washington will sell out Ukraine to find common ground with Moscow. The recentarticle, devoted to a recent meeting between U.S. Secretary of State Antony Blinken and Russian Foreign Minister Sergei Lavrov, aims to convince readers that the United States is ready to take steps toward Russia: "The decision regarding the Nord Stream-2 was made collectively by Biden's team. It shows that the USA is ready to make concessions, in particular on Ukraine''.

Journalists from Strana.ua have links with sanctioned TV channels (112 Ukraine, NewsOne, and ZIK) whose de-facto beneficiary is pro-Kremlin politician Viktor Medvedchuk (read our analysis of these channels here). Svitlana Kriukova, the deputy editor-in-chief of Strana.ua, often comments for First Independent, which replaced the sanctionedTV channels. Strana.ua journalist Olesia Medvedeva can also be seen commenting from time to time on the TV channels First Independent and NASH (read more about these channels here. Additionally, Medvedeva took part in Soviet-style musical propaganda which strongly echoed the type used by the Russian state to promote its  cult of victory in the "Great Patriotic War." Furthermore, Strana.ua was one of few online outlets who took part in the largepress conference[2]  in First Independent's studios on March 1 hosted by Oksana Marchenko, a Ukrainian TV host and the wife of Viktor Medvedchuk. 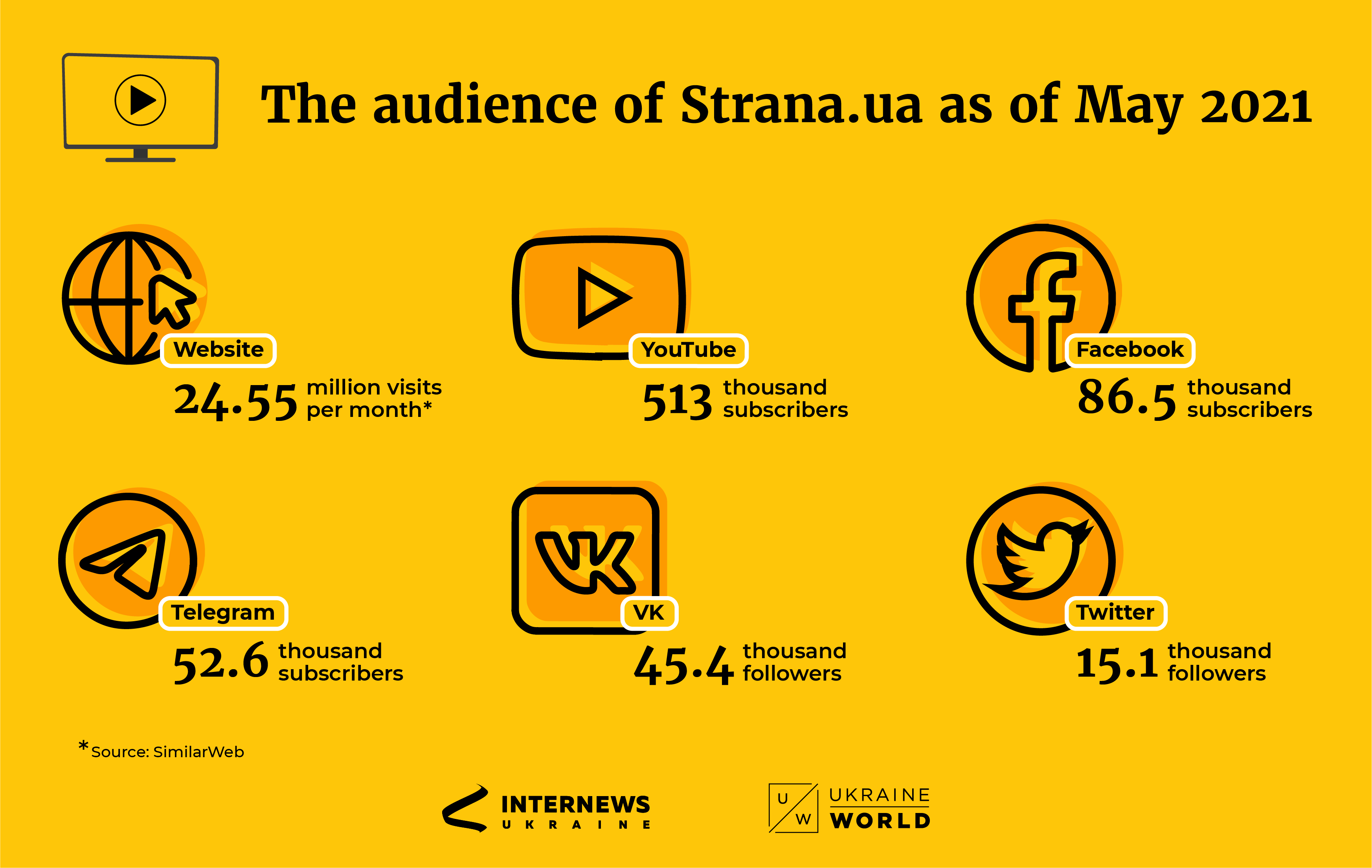 How Strana.ua fuels the narrative about "Nazis in Ukraine"

To determine what topics raised by Strana.ua resonate with its readers the most, we studied its Facebook page, which has 86 thousand followers. To analyse the activity of thepage, we relied on data from CrowdTangle, a Facebook-owned tool that tracks interactions on public content from Facebook pages and groups, verified profiles, Instagram accounts, and subreddits. It does not include paid ads unless those ads began as organic, non-paid posts that were subsequently "boosted" using Facebook's advertising tools. It also does not include activity on private accounts, or posts made visible only to specific groups of followers. 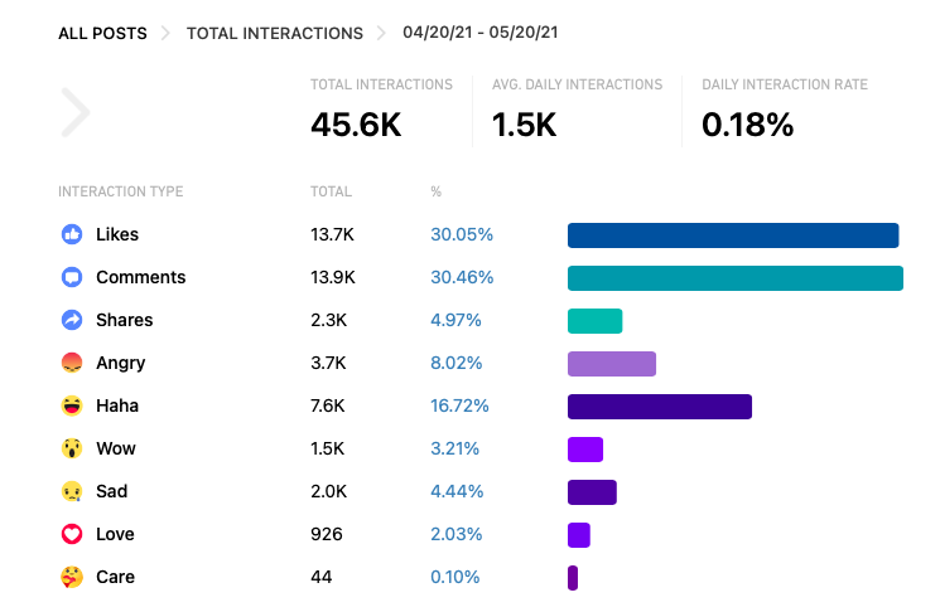 The page also gained 144 subscribers within this period, which is 0.17% of the total subscriber count. It is also worth noting that the posts which appear on the page are "Link" posts only — they lead to articles on the website and are not separate content created specifically for Facebook.

If we take a look at the posts with the most interactions, six out of ten posts with the most interactions are dedicated to one topic: "The Ukrainian government protects Nazis." For example, in one of the posts, the page writes that nationalists are going to hold a march in vyshyvankas to commemorate the anniversary of the creation of the SS Galicia Division, but the Ukrainian government does not care. 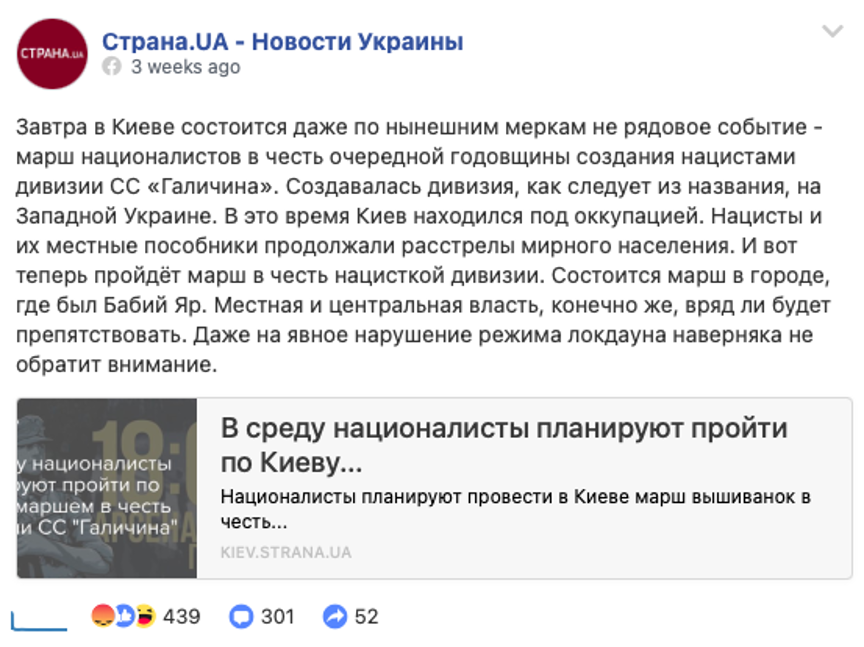 After the event took place, Strana.ua published an article about the march in which it writes that the Ukrainian government could have prohibited it but chose to protect it instead. In reality, only a few dozen people participated in the march, and the Ukrainian police opened a criminal case based on Nazi symbols which were seen during the event. Ukrainian public officials, including President Zelenskyi's, condemned the march.

Another popular post on the website's Facebook page wass about a representative of Pravyi Sector, a Ukrainian far-right organisation, who used the Nazi salute during the procession of WWII veterans on the 9th of May in Kyiv, refering to avideo initially published on the Politika Strany Telegram channel (edited by Strana.ua). This is another case in which Strana.ua used sparsely-attended nationalist events to show that Nazi movements are influential in Ukraine and are protected or even supported by the government. 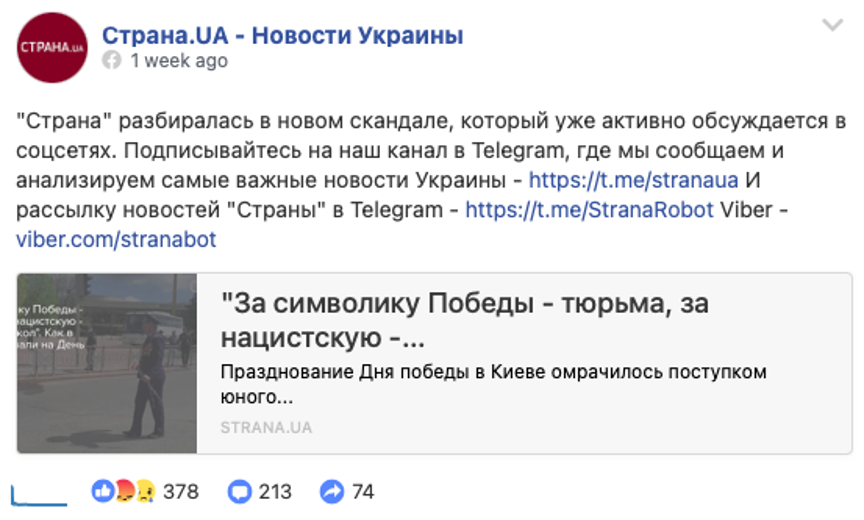 It is worth noting that the Facebook page of Strana.ua is often the entry point from which these messages are shared further on Facebook. For instance, the post about the "Nazi march" was shared by the Facebook page Antimaidan. Odessa. It was also shared by Facebook users to regional public groups Rovno — Tvoy Gorod (Rivne is Your City) and ZHURNAL "REGION-YUG" (Region-South Journal).

We also used the CrowdTangle Link Checker extension for Google Chrome to take a look at pages and groups which recently shared articles about the "Nazi march" from Strana.ua.

Aside from its own Facebook page, Strana.ua article about the upcoming "Nazi march" was also shared by Oleksandr Feldman, an MP from Viktor Medvedchuk's pro-Russian Opposition Platform — For Life party, as well as on the public groups VELIKAYA OTECHESTVENNAYA INFORMATSYONNAYA VOYNA (The Great Patriotic Information War, a play on the Russian/Soviet term for World War II), NE MOVCHY (Don't be Silent) and Za Ukrainu (For Ukraine) public groups which all regularly share Russian narratives. 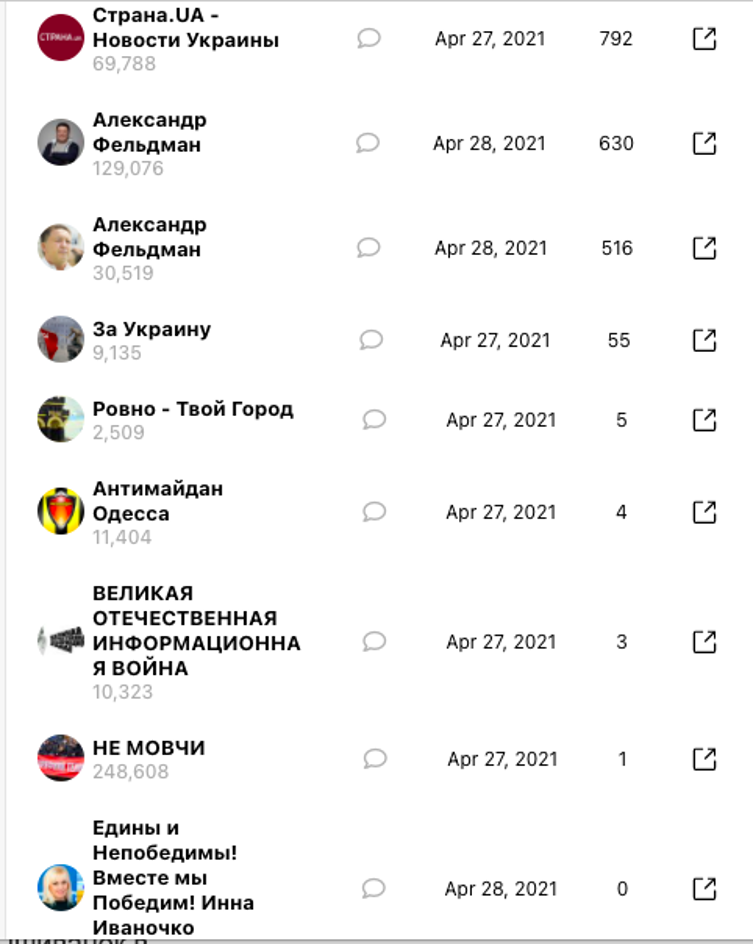 An article about the march after it took place was shared in German-language public groups Russlandversteher (Russia Understander), Wir erinnern uns (We Remember Us) and Gegen Defender 21 (Against Defender 21). In all three cases, the text of the posts are identical. The posts also include a link to an article on Russia-friendly propaganda website anftifashist.com which is also about "Nazis marching in Kyiv."

Messages about Nazis originating from strana.ua are in line with the Kremlin propaganda narrative about Nazis supposedly controlling political and social life in Ukraine ,which has been aggressively repeated since 2014 and developed decades before. For instance, Russian media, including RT, lenta.ru, the TV channel Pervyi Kanal and many others also reported about the "march in vyshyvankas for the anniversary of the creation of the SS Galicia Division,  underlining that "Ukraine can't or won't do anything to deal with Nazis."

This illustrates how certain outlets in Ukraine create and spread malinformation content which is later picked up by Russian media and fuels the Kremlin's narratives. First, they produce content about a poorly-attended event, exaggerate its scale, then amplify it to their audiences on social networks, and simultaneously usher it into circulation by Russian state-owned media. This way, even occasional marches of far-right radicals can be portrayed as widespread Nazi movements. While the far-right is a problem in many European countries, with Ukraine being no exception, Russian propaganda loves taking a pars pro toto approach and dramatically exaggerates the scale of the problem. In this distorted picture, far-right parties, which during the last parliamentary election received only about 2% of the vote, are presented as the key force dominating Ukrainian politics.

10 Ukrainian Startups That Are Conquering the World (Despite the Pandemic)

Russian proxies have been giving information backing on social media to the Lukashenka-manufactured migrant crisis on Belarus’ borders with the EU.