"Back Home": How Russia Uses Facebook to Strengthen Its Control Over Crimea

July 20, 2021
Russia uses Facebook pages and public groups in occupied Crimea to spread the Kremlin’s narratives and strengthen its control over the peninsula. 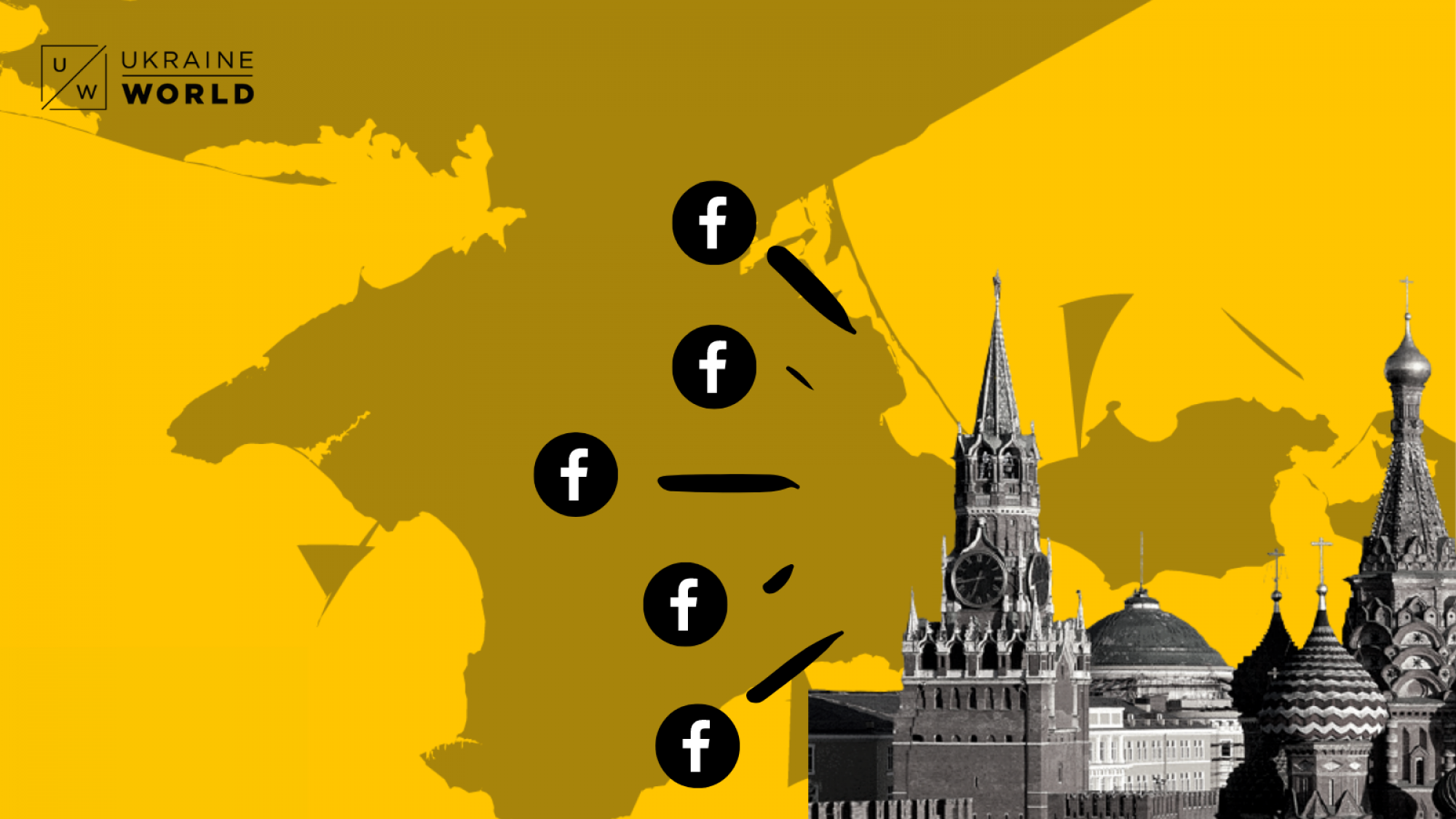 More than seven years have passed since Russia began illegally occupying Crimea. As UkraineWorld wrote in March 2021, we can see the long-term repercussions of Russia's aggression in the peninsula: water shortages, prosecutions, human rights violations, militarization, and drastic changes to Crimea's demographics.

Over these past seven years, the Kremlin has been vigorously enforcing its control over Crimea,  not only by turning the peninsula into a large military base but also by establishing control over Crimean media and social networks.

Russian media companies such as Rossiya, NTV, Pervyi Kanal, and Zvezda, took over Ukrainian broadcast frequencies in Crimea. Furthermore, Russia has blocked access to Ukrainian websites. Meanwhile, Kremlin narratives have been spreading like wildfire on social networks — in particular on such as Russia-controlled VK, but also on Facebook.

UkraineWorld studied 25 popular pages and 25 public groups on Facebook about Crimea to determine which pro-Russian and anti-Ukrainian narratives have been popular since January 1, 2021. To do so, we used CrowdTangle, a public insights tool owned and operated by Facebook. The list of pages and groups is available here. The research period was from January 1, 2021 to July 8, 2021

During this period, 117,1 thousand posts appeared across the 50 communities. 19,2 thousand were posted on pages and 97,9 thousand were shared in groups. The combined number of reactions from all 50 communities was 8,16 million: 2,18 million on pages and 5,98 million in groups. Hence, the average post on a public page from our sample had 113 interactions, while the average post in a group had 61.

There was a slight jump in the number of posts and reactions both on pages and in groups in March 2021, around the celebration of the seventh anniversary of the so-called "Crimean spring" (the Russian term for the illegal referendum on Crimea joining Russia). However, the number of posts and reactions continued growing in April, May, and June. This may be explained by the fact that the overwhelming majority of the posts which appeared in the Facebook communities we studied were photos of Crimean landscapes and tourist attractions, and hence more of these posts appeared in connection with tourist season on the peninsula. 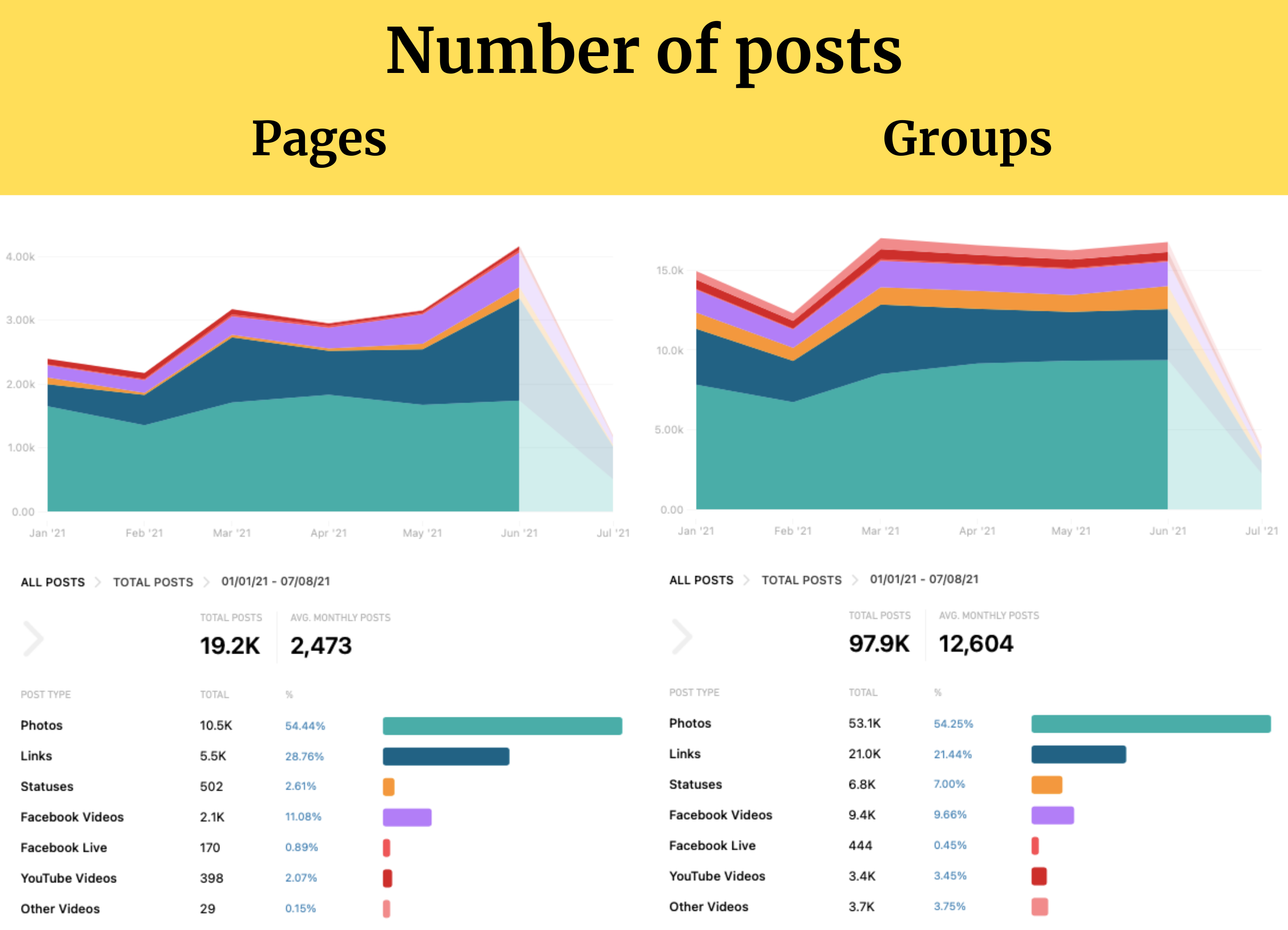 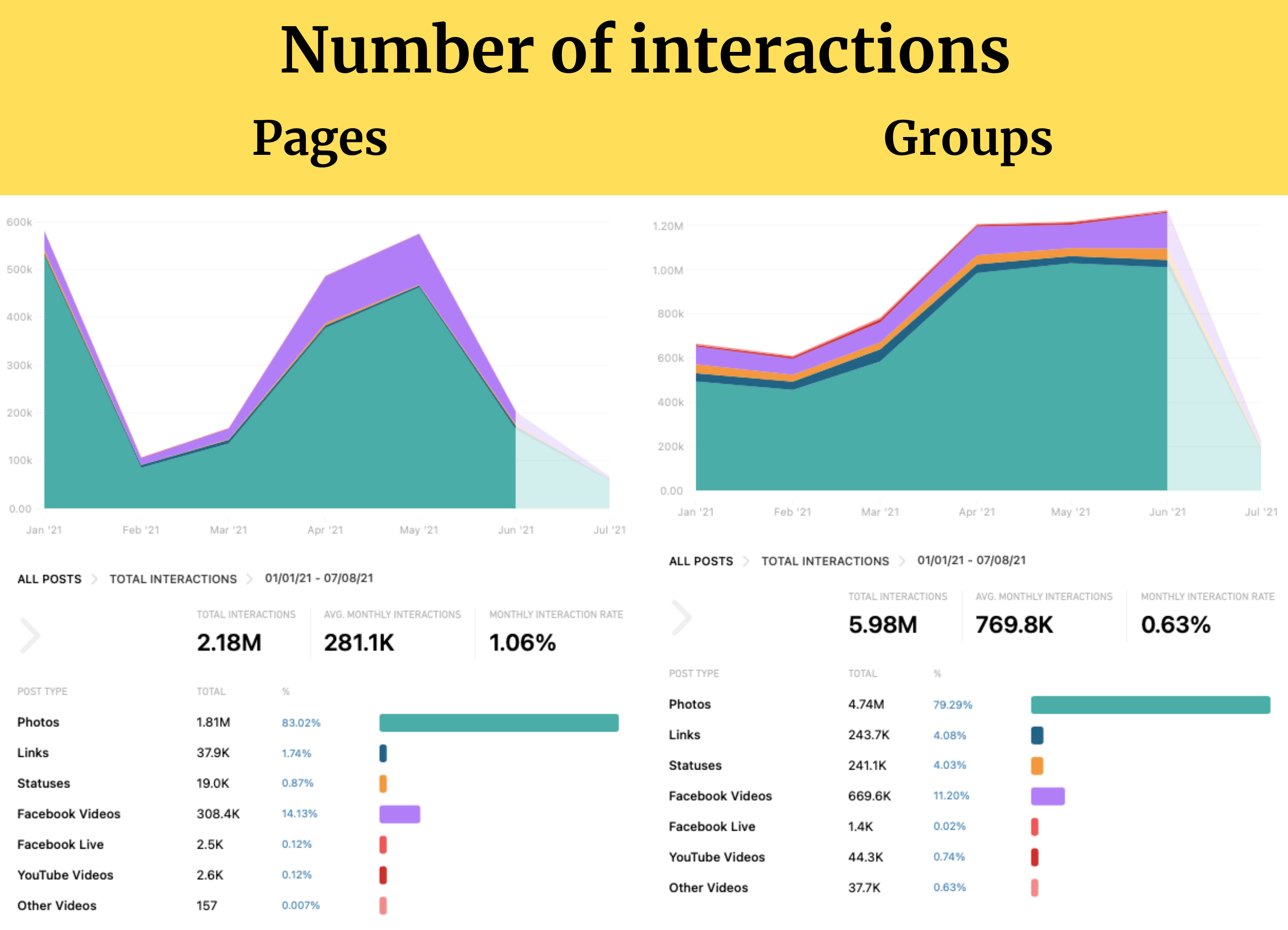 At the same time, along with landscape photos, UkraineWorld discovered quite a lot of posts with pro-Russian and anti-Ukrainian narratives. Thus, these pages used apolitical content to attract subscribers, and afterward shared political narratives.

"Crimea is Russian, Ukraine should forget about it"

One of the most popular Russian narratives about Crimea is that the peninsula had been Russian territory for a long time and merely "came back home" in 2014.

One of the messages within this narrative is that leaving Ukraine has changed the lives of the people of Crimea for the better. For instance, the page of the Crimean branch of Yedinaya Rossiya (United Russia), the ruling party in Russia, wrote on March 23 that "the Crimean spring has given the [Crimean] republic renewal, hope, and good prospects." 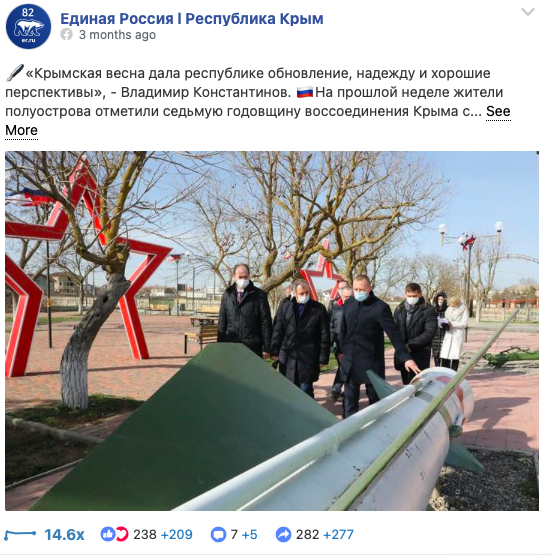 Another message is that Crimea left Ukraine due to the Euromaidan. Such rhetoric can frequently be seen on the pages of Russian state-owned media, such as the Crimean branch of RIA Novosti. On February 18, the page quoted fugitive Ukrainian president Viktor Yanukovych saying that "Euromaidan leaders — [Oleksandr] Turchynov, [Arseniy Yatseniuk], [Petro] Poroshenko and others — have done everything so that Crimeans would feel foreign in the 'new' Ukraine." 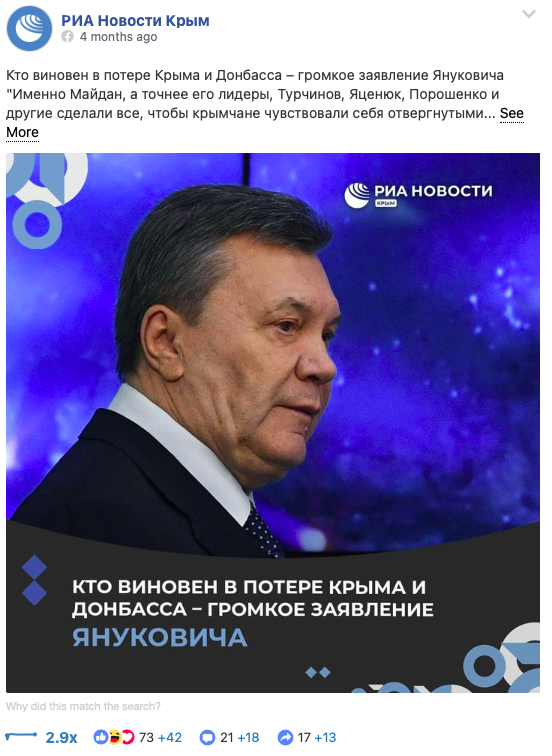 The RIA Novosti Krym page also shared a statement by Russian official Andrey Krasov, saying that Ukraine has to "respect the choice of the Crimeans and get rid of the illusions that Ukraine could have held Crimea back in 2014." 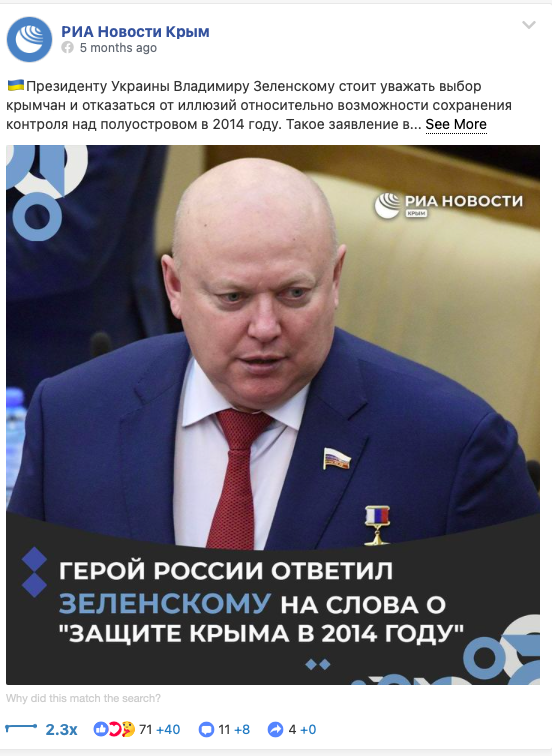 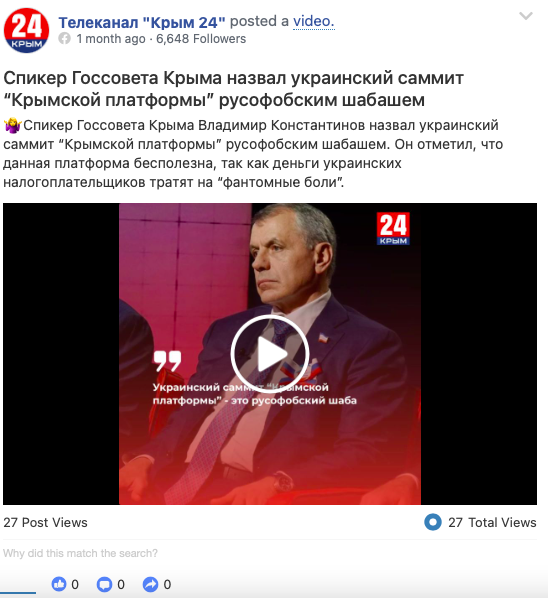 Krasov's timing was not coincidental. It accompanied another Russian narrative purporting that Ukraine plans to invade Crimea. RIA Novosti Krym reported on February 10 that "Kyiv offered use of air space over crimea to NATO." 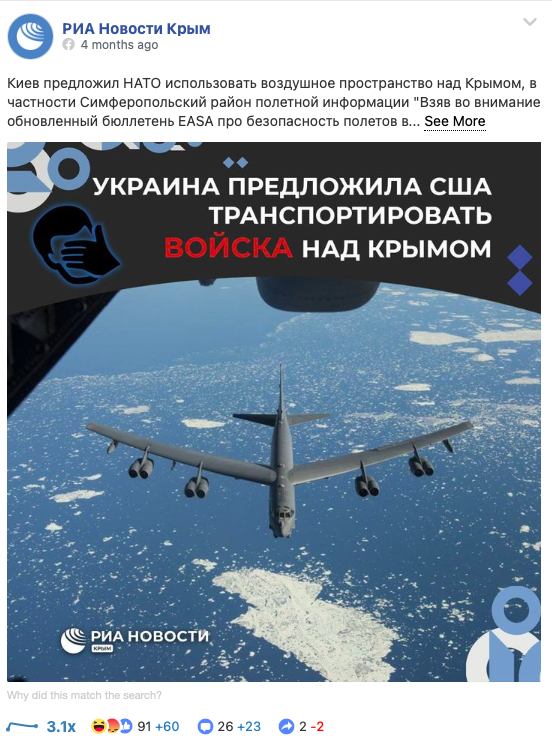 Meanwhile, on April 2 RIA Novosti Krym wrote that "Ukraine is holding military exercises near the Crimean border" which "might result in provocations." According to the post, Ukrainian aggression against Crimea would be "suicide." 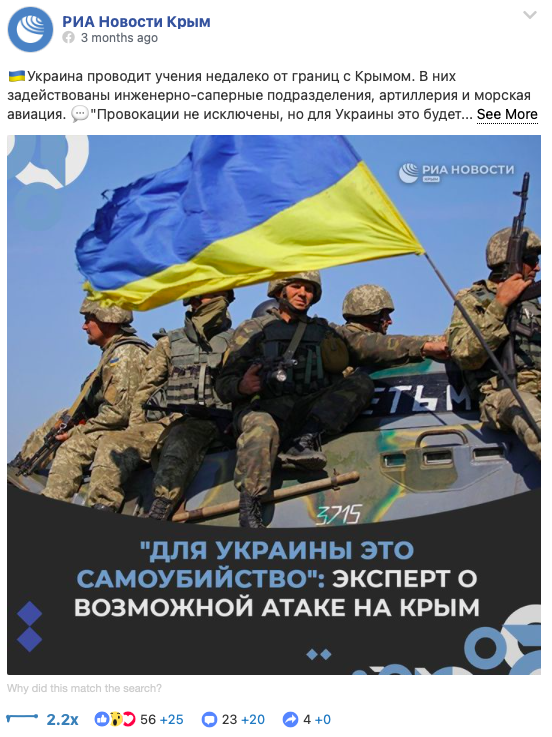 "Ukraine has taken water away from Crimeans"

Russia also blames Ukraine for "blocking water supply to Crimea," which is presented as another sign of aggression against the people of the peninsula. One example of this narrative comes from  a post on the page Primechaniya. Zhyzn' Sevastopolia i Kryma (Remarks on the life of Sevastopol and Crimea), which shared a quote from Natalia Poklonskaya, a former Ukrainian prosecutor who defected to Russia during the annexation of the peninsula, saying that "Ukraine did not privatize the water so that it could have right to stop its supply to Crimea." 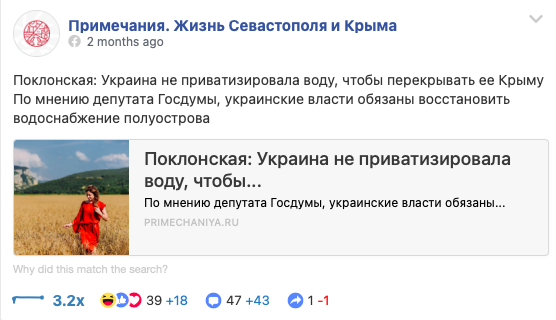 A page titled Крым — Crimea, which normally shares photos of Crimean landscapes, also wrote about this. According to a post on January 19, water shortages in Crimea appeared in 2014 due to Ukraine blocking the water canal from  Kherson Oblast, but the Russian government will allocate 48 billion roubles by 2024 to solve this problem.

"Crimea is a part of Russian glory"

One of these narratives is the boosting of Russian President Vladimir Putin. For example, RIA Novosti Krym shared a quote from  Kremlin spokesperson Dmitry Peskov saying that Putin "does not tolerate incompetence" and he is "cruel and merciless when it comes to betrayal or stealing." Such messages are meant to support Putin's image of a "strong leader". 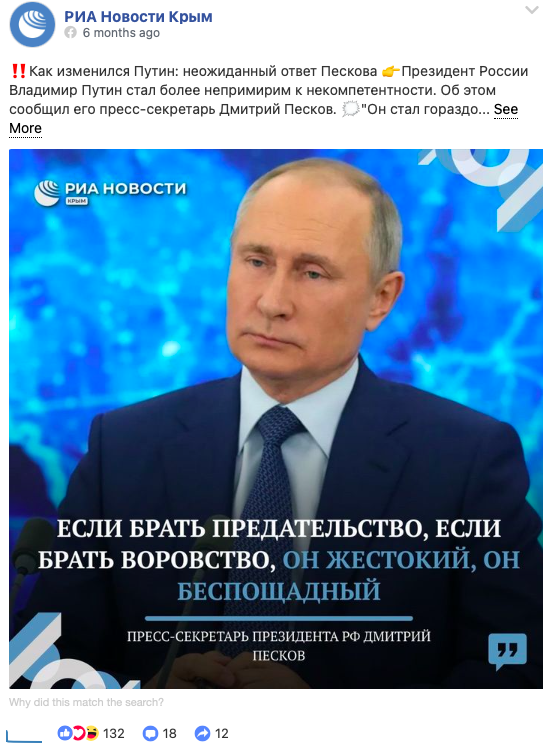 The glorification of the USSR is also present, which is meant to once again link Crimea to Russia. An example of this is a post on the page of the Crimean branch of Yedinaya Rossiya (United Russia) dedicated to the day of the Cosmonautics Day which underlines that cosmonauts from Crimea are Russian heroes along with Yuriy Gagarin. 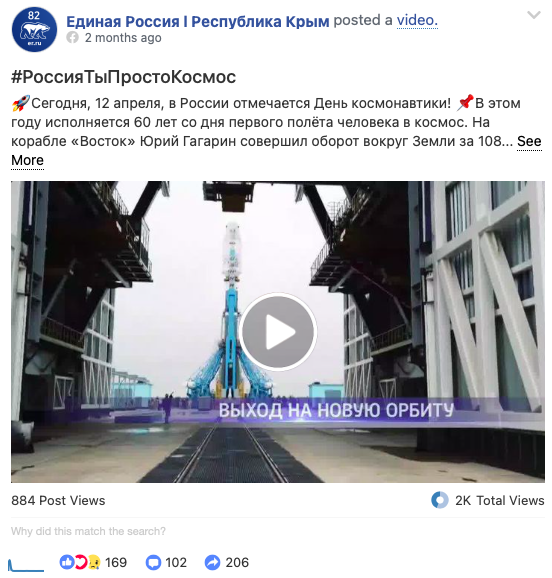 *Despite the international sanctions regime imposed over Russia for illegal occupation of Crimea, Kremlin-linked "media" and numerous pro-Kremlin communities are using Facebook, a multinational US-based company, to spread narratives that massively contradict basic principles of international law. Very often such narratives go hand-to-hand with neutral content such as landscape photos designed specifically to attract as many subscribers as possible.

Russia utilizes its control of Crimea to build and strengthen the idea that the peninsula can and will never be Ukrainian again. To this end, the Kremlin builds up its military presence and at the same time promotes its narrative through any channel possible, both in media and on social networks. Such a strategy is especially noteworthy in the wake of the Crimean Platform Summit that will take place on 23 August 2021.

This article was written within the framework of the project "Antibot: how to resist information manipulations" which is being implemented by NGO Internews-Ukraine with financial support from the NATO Information and Documentation Centre in Ukraine. This article is the sole responsibility of its authors and might not reflect the official position of NATO.*

This is the story of Marianna, a teacher from Mariupol, who managed to evacuate from the city.