A Long Path To Equality: Where Is Ukraine On LGBT Rights?

Troll Warriors: Who is Commenting On Popular YouTube Channels With Anti-Western Rhetoric And Why

August 6, 2020
A massive information campaign against Ukraine's pro-EU and pro-Western orientation is spreading in Ukraine across TV channels and social networks. Anti-Western videos on Youtube often have hundreds of thousands of views and huge numbers of comments. In this piece, we explore who these commenters are, and whether or not they are real people. 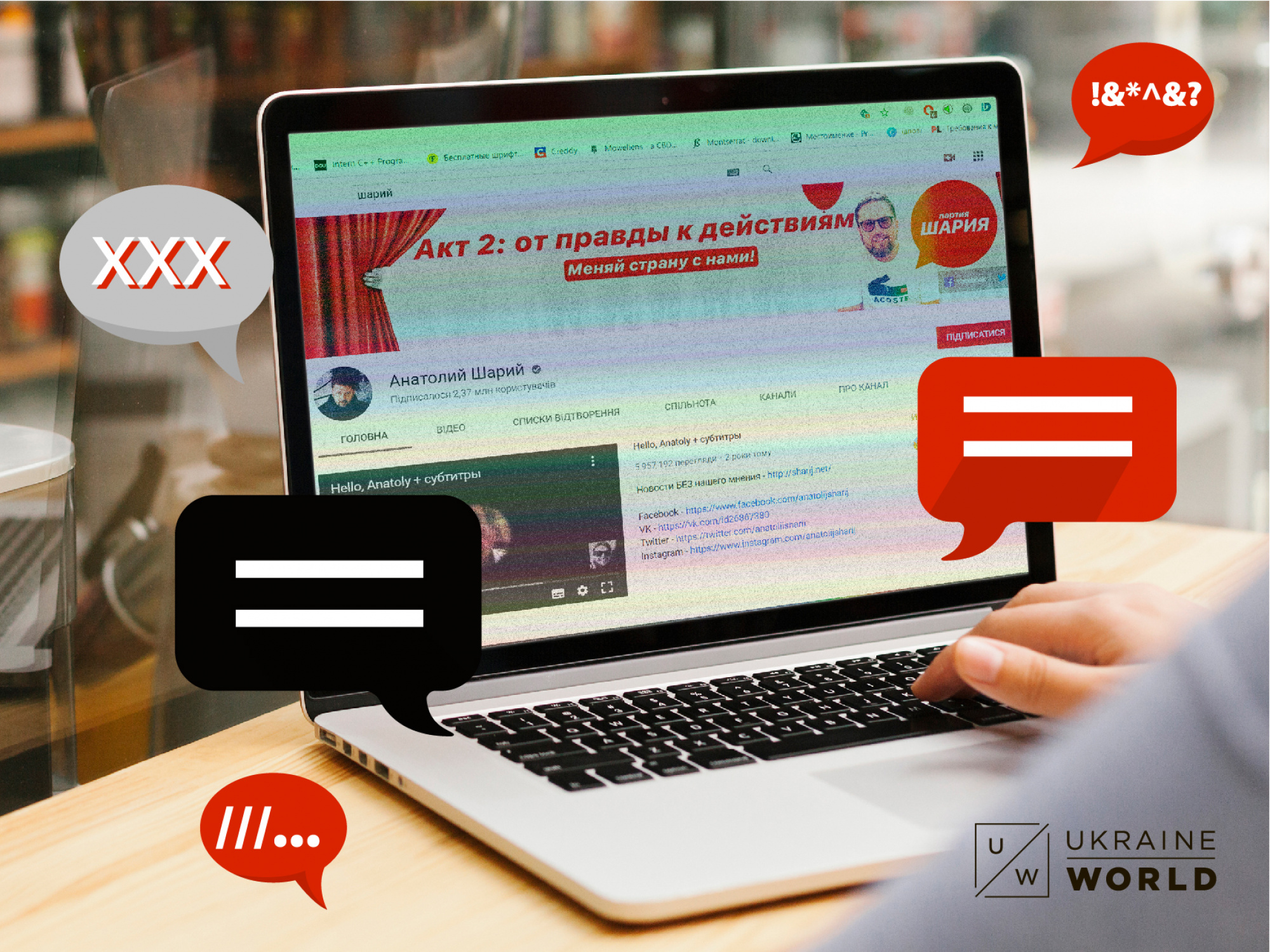 In cooperation with the data research company Semanticforce, Internews Ukraine and UkraineWorld analyzed comments left between  June 10 and July 10, 2020 on ten popular YouTube channels which have been known to spread anti-Western rhetoric and Russian propaganda messages:

Here's what we found.

Most commenters do not indicate which country they are from

We studied the profiles of 10 thousand commenters (1000 randomly selected commenters from each YouTube channel). Only 463 of them had information about their location in their profile. 174 users noted they were from Ukraine, 179 put Russia as their country, while 110 listed another country. Here's how location-based distribution looks  for each channel: 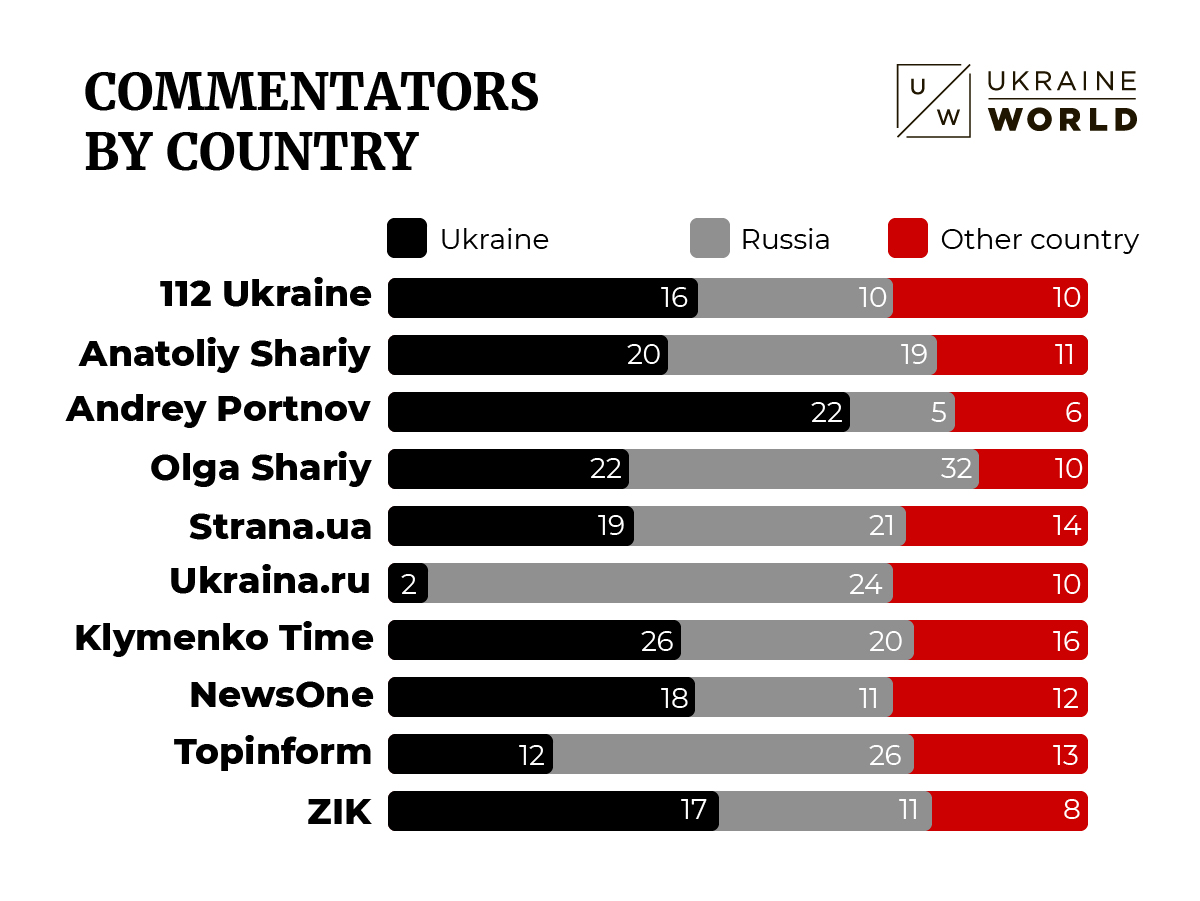 Naturally, the volume of Russia-based commenters on Russia-based YouTube channels like Украина.ру and Topinform is higher. However, it is also very significant on the channels of Anatoliy and Olga Shariy, who live in the EU and claim to be not pro-Russian, but instead pro-Ukrainian. Users from Russia also dominate on strana.ua's YouTube channel. 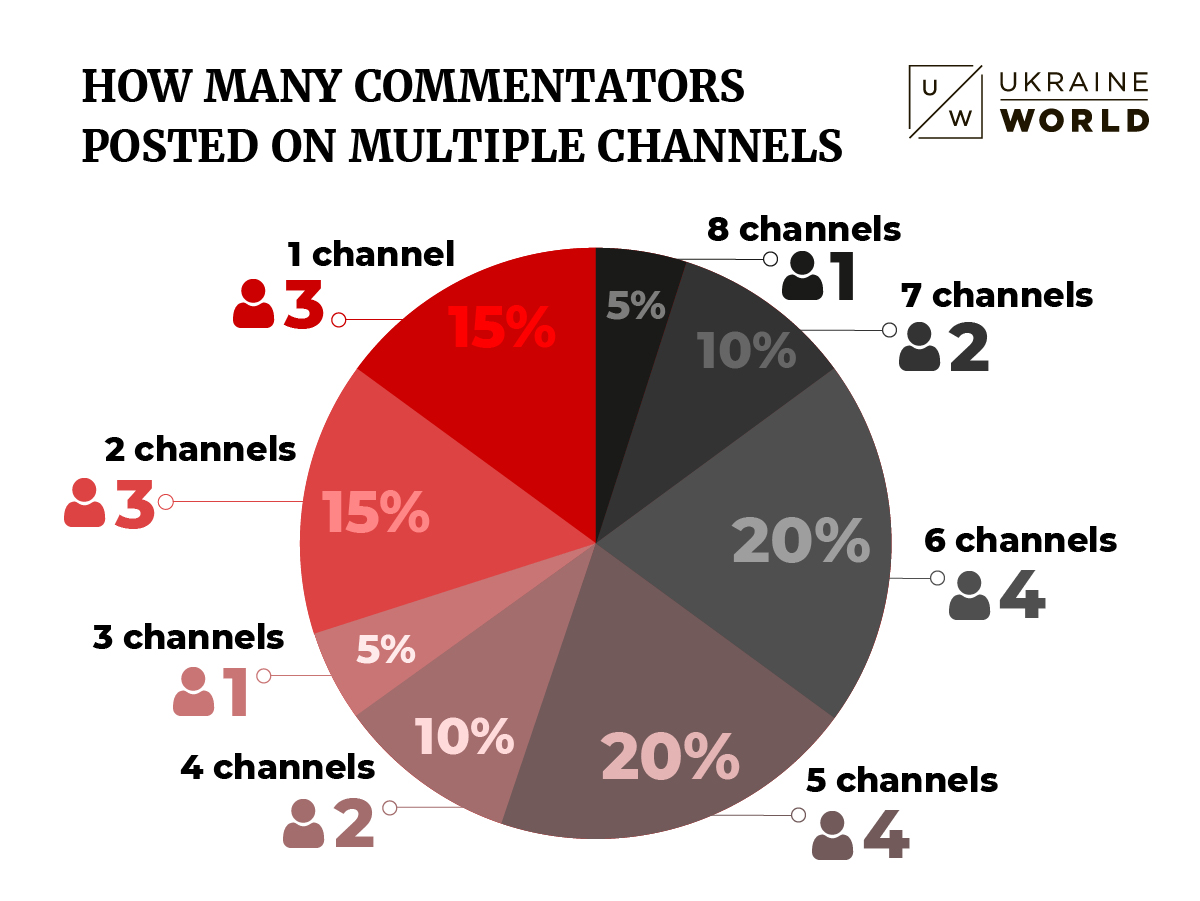 Some of these users may be real people up to ordinary internet hijinks, - but the number of comments they leave is impressive, which call their motivation into question. For instance, user Евгений Джобава (Evheniy Jobava) left 570 messages across 8 channels (all except for Украина.ру and Topinform) during the month. He is likely to be a real person: we found his Facebook account, and it appears authentic. However, he seems to be a tremendous fan of Anatoliy Shariy: 451 out of his 570 comments were left on Shariy's videos. In one of his comments, he promoted the idea of "external governance" which ostensibly has the power to  to replace Ukraine's president:

"That's why the WESTERN CURATORS took down Poroshenko. He only used to steal hats, while Ze [Ukraine's President Volodymyr Zelensky] was ready to kill from the very beginning"

Other accounts are more suspicious, and could likely be trolls or bots. User U, who left 307 comments across 6 channels, wrote identical comments under the same video. For instance, this comment was written twice under Anatoliy Shariy's video, of titled "Poroshenko Kissed Putin's hand" (overall, we encountered this particular comment 5 times):

"P@rasha [pejorative nickname for Petro Poroshenko, Ukraine's President in 2014-2019] is true to himself.  "Not a word of truth" is his motto))) Let me predict: Pa [Poroshenko] will rush to the seventh presidency. With Ze's [Zelensky] hands he will deal with the unwanted PPSh [Shariy Party], Ze will say that he is tired and leave. A call to Putin is needed to convince Eternal: "We should like, keep "fighting" together, let's go, bye." BUT ... The Chess Player [Shariy] will destroy the plans of two Jews."

Some of the trolls are more specific. For instance, user Ёжик против НАТО (Hedgehog against NATO), who mostly comments under the videos of 112 Украина (112 Ukraine), actively shares a narrative that the Ukrainian government is being controlled by the EU and NATO. This is an example of a comment from this account:

"Which government? What president? Frau [Merkel] told them to close down the mines and the "government" said WILL DO"

We also noticed several accounts which try to argue against the dominant narrative of anti-Western actors. One of these suspicious accounts is Ivan Skinner, possibly a bot or a troll, who has posted the following message two times under the same video on Страна.ua (Strana.ua) channel about alleged conversations between Poroshenko and Putin:

Overall, there are many bots/trolls among the top commenters on all the channels we studied. We base this assumption on their names, profile pictures and, most importantly, how many times they post identical comments. A few examples: 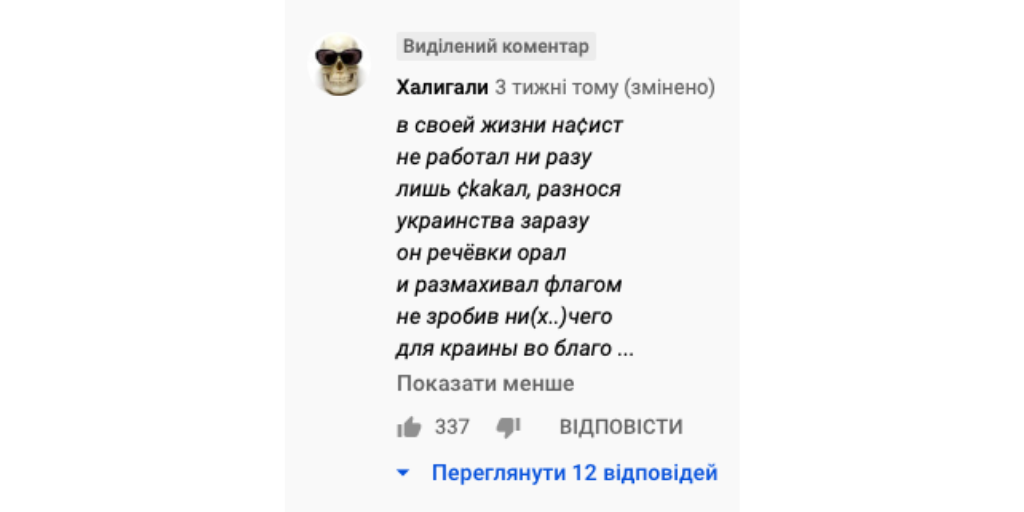 "The nazi never worked once in his life, only jumped and spread the ukrainisation infection, proclaimed slogans and waived the flags without any use for the country"

"In Ukraine  today there is a fluctuation in people's minds. Nothing will happen until this fluctuation passes"

"Isn't it a bit late already? You have shredded your pathetic non-state into atoms and are now trying to glue it back together.

YouTube comments can be even more engaging than videos themselves. People (or trolls and bots) who comment with the same messages contribute to building up a "bubble" for people to think that the anti-Western and pro-Russian position is the only proper one. The most active commenters on the channels we studied help to create such a "bubble."

Anti-Western actors use all possible tools to show that they are popular.

One of these tools involves using virtual people (bots or trolls) to promote their messages. They don't only limit themselves  to "fake news," but also use "fake audiences" and "fake supporters" to promote their goals.

This article was written within the framework of the project "Sharing Ukrainian experience in building resilience to hybrid warfare" which is being implemented by NGO Internews-Ukraine with financial support from the NATO Information and Documentation Centre in Ukraine. This article is the sole responsibility of its authors and might not reflect the official position of NATO.

How Odesa Has Kept Its Culture Alive During Quarantine