“Ukraine sold its sovereignty to the IMF”, “Protests in America are a prelude to the U.S. downfall:” Anti-Western Messages in Ukraine #8

June 2, 2020
Internews Ukraine and UkraineWorld.org publish a regular roundup of anti-Western messages in Ukraine aimed at undermining trust in democracy and in Ukraine’s integration with the EU and NATO. We publish regular weekly and monthly reports, and also provide alerts covering specific narratives when they appear. 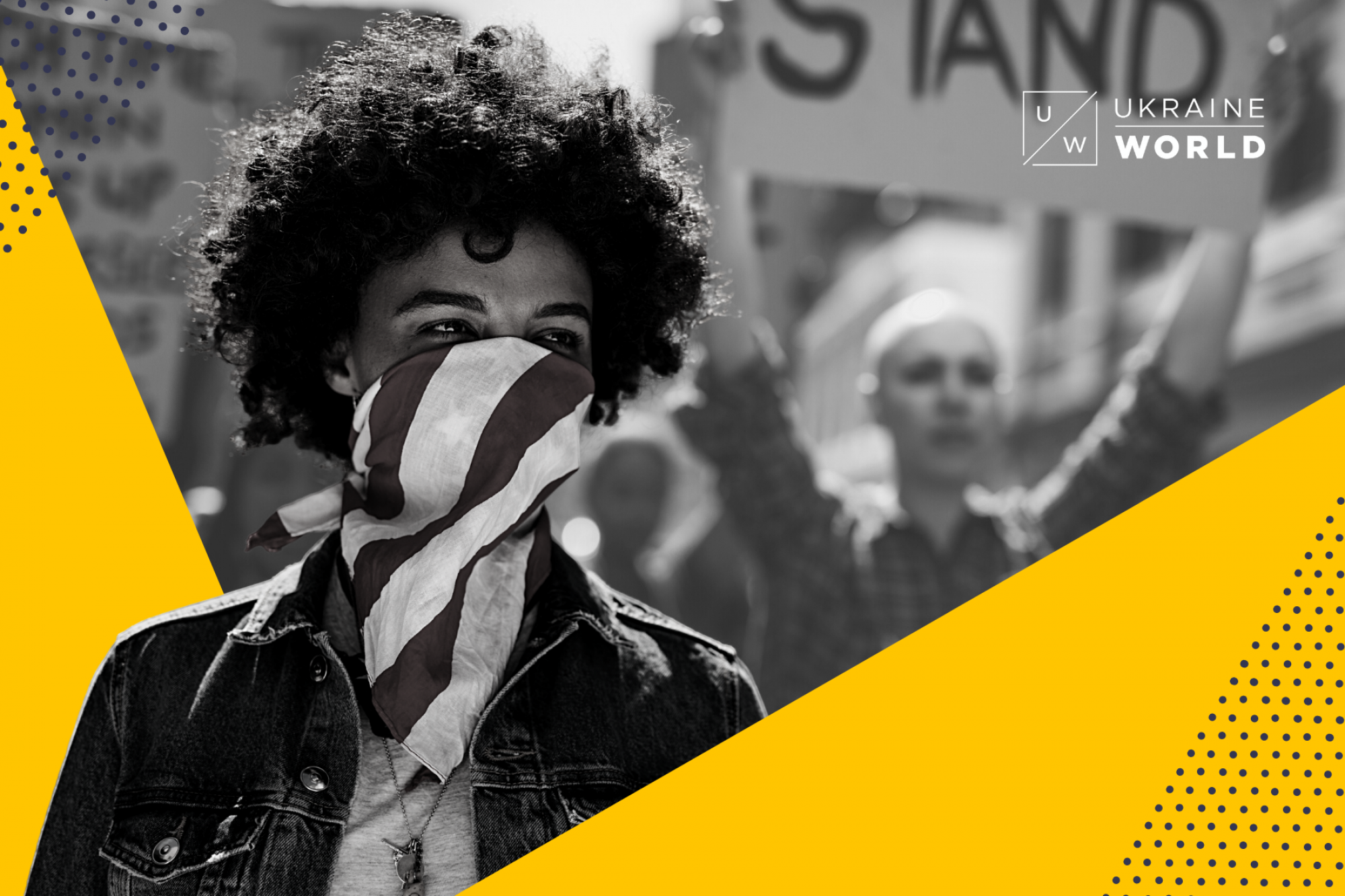 Over the period of May 25-June 1, the following anti-Western narratives were the most prominent in Ukraine's information sphere:

"Ukraine has sold its sovereignty to the IMF" 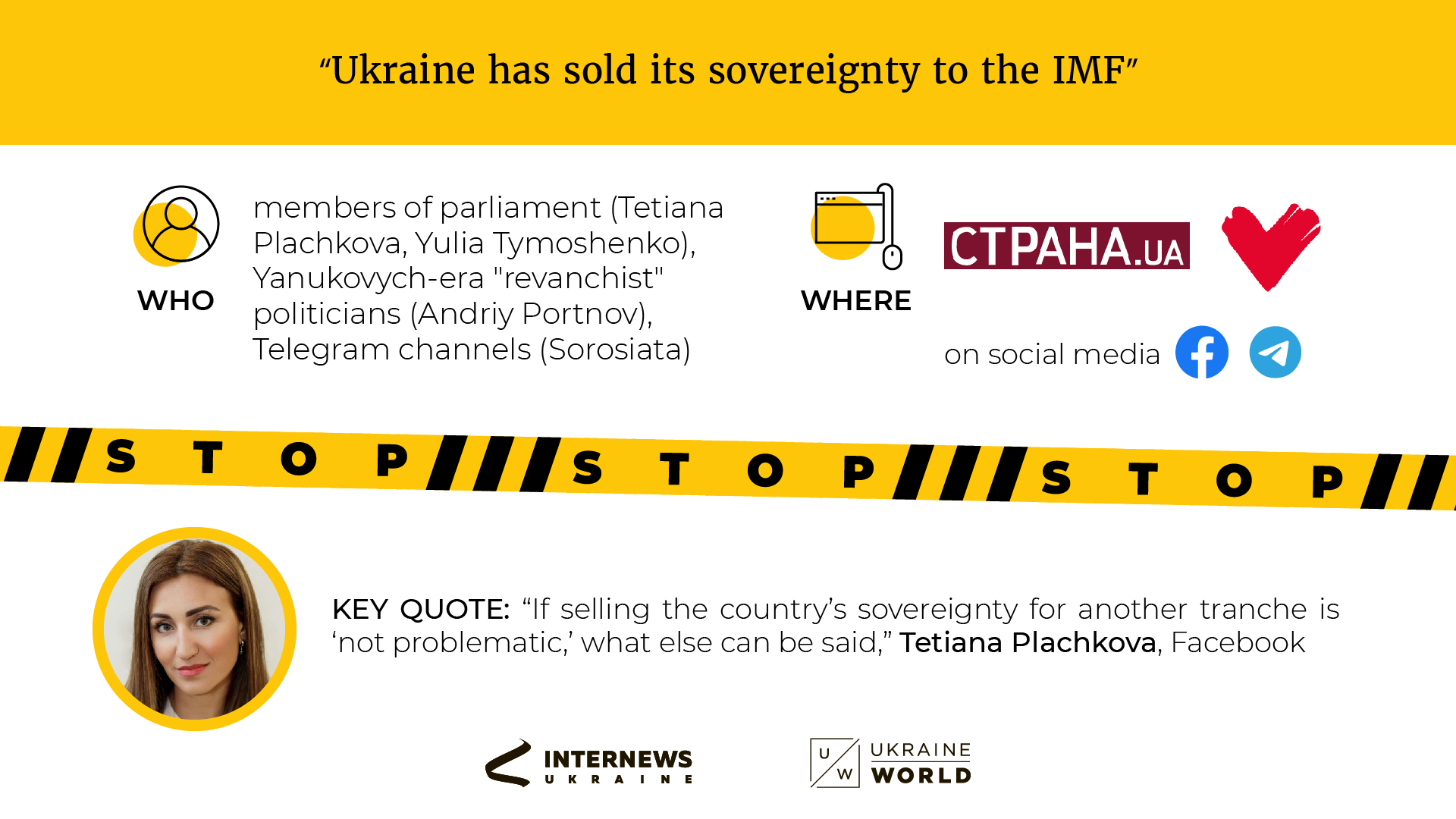 A memorandum between Ukraine and the IMF on the provision of a new loan tranche leaked to the press this week. Its content was the most discussed topic of the week, with many anti-Western actors saying that Ukraine sold out its sovereignty for USD 5 billion.

Strana.ua studied the whole text of the memorandum and listed the IMF requirements from the memorandum. According to the article, "new IMF loan means an additional tax burden and a complete ban on benefits and preferences for business, which minimizes the possibility of a quick economic recovery after the crisis." "For ordinary Ukrainians, agreements with the IMF also do not promise anything good. Medicine will become less affordable, and so will schools for children. Utility tariffs will increase. There is also a risk of raising the retirement age," the article reads.  This article was republished in its entirety by the official Facebook page of Mykola Azarov, an ally of Viktor Yanukovych and Ukraine's PM in 2010-2014.

Tetiana Plachkova, an MP from the pro-Russian Opposition Platform---For Life party, wrote on Facebook that by signing the memorandum with the IMF, the Ukrainian government sold Ukraine's sovereignty. "The most interesting thing is that Ukraine's representatives said that they were ready to fulfil all the conditions [of the memorandum] and that there were no 'problematic' ones. If selling the country's sovereignty for another tranche is 'not problematic,' what else can be said" Plachkova wondered.

Andriy Portnov, a lawyer and former advisor to Ukrainian President Viktor Yanukovych (2010-2014), also argued on his Telegram channel that the new memorandum brings no good news for Ukraine. "Dear rulers [the Ukrainian government], it seems that you gave away everything with a single document. Even your idol and inspiration the former President [Petro Poroshenko] did not manage to do this. You gave away all spheres and branches at once," Portnov wrote.

Yulia Tymoshenko, the leader of the Batkivshchyna party, argued that the government is negotiating with the IMF behind the backs of ordinary Ukrainians. "Laws which go against Ukraine's interests such as the law on selling out agricultural land and the law destroying the National Bank were signed by President Zelensky, but Ukraine received no loans from the IMF. We received a new negotiation process and new conditions instead," Tymoshenko said.

Meanwhile, the Telegram channel Sorosiata wrote that "cooperation with the IMF always leads to national bankruptcy if not stopped on time." They cited the case of Argentina, arguing that "on May 23, 2020, after the expiration of the payment of $0.5 billion in interest, Argentina announced a technical national bankruptcy. This is their third since the year 2000. Over the past 60 years, the IMF has 'rendered financial assistance' to Buenos Aires about 30 times. In 2018, the country agreed on a new package of 'services' for $57 billion...".

"Protests in America are a prelude to the U.S.'s downfall" 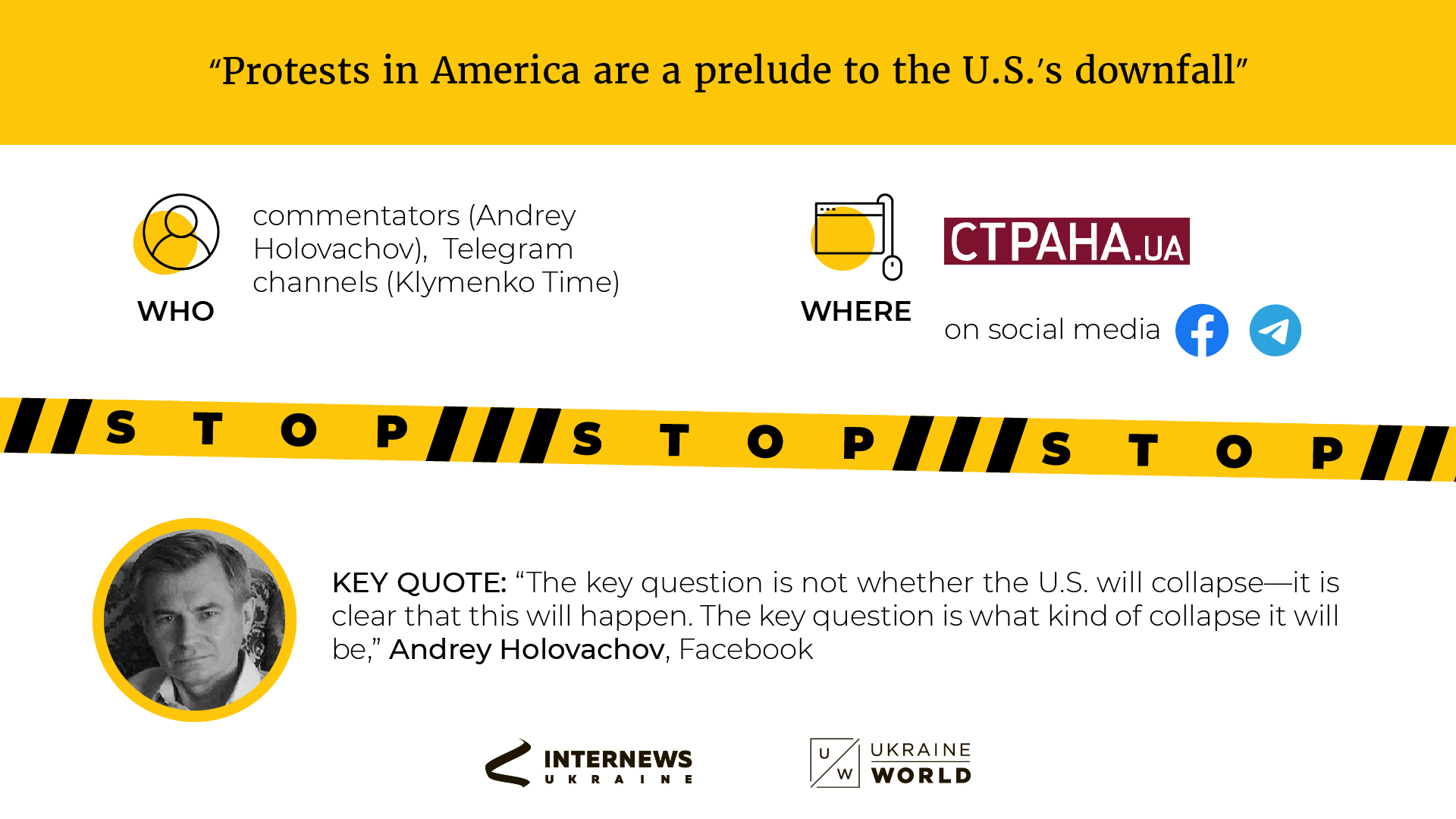 Anti-Western actors are using the protests which originated in Minneapolis to spread the narrative that the U.S. is in deep crisis.

Andrey Holovachov, an outspoken pro-Russian commentator who is often quoted by Russian propagandist websites like ukraina.ru, writes on Facebook that "an uprising of plebs" is taking place in the U.S., and that it is a harbinger of the country's collapse. "The key question is not whether the U.S. will collapse---it is clear that this will happen. The key question is what kind of collapse it will be,"  Holovachov argues. He describes three scenarios. First, the U.S. might "go down quietly." Second, "this collapse might be followed by wars, either several regional wars in which the U.S. would lose, a new civil war or a global nuclear war." This post was republished by strana.ua

The Klymenko Time Telegram channel tried to tie the protest to the Democrats and George Soros. According to a post on the channel, Joe Biden supports the protests and is trying  to score political points from them. "The protests are not about Floyd anymore, they are targeted against Trump. And this is good for one person---his political opponent Joe Biden," the post reads.  Klymenko Time also writes that members of Biden's electoral office are helping the protesters via proxies. The Telegram channel also hints that protests in America are "somewhat similar to colour revolutions in Ukraine and Georgia which were financed by the West" and says that "this is ironic."

"Ukraine is getting no benefits from European integration" 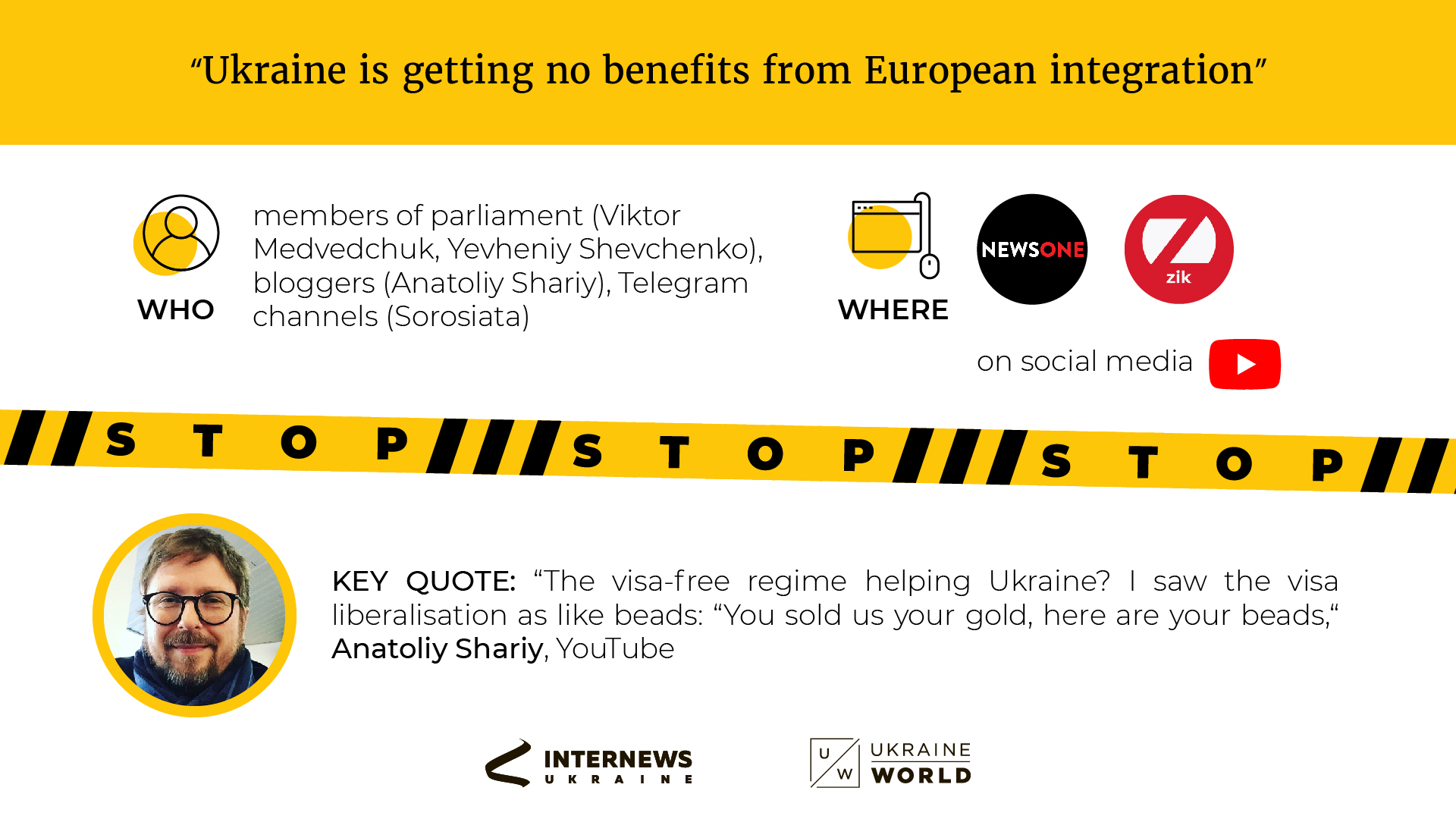 Anatoliy Shariy, a popular YouTube blogger and leader of Shariy Party, in his video reaction to a Kyiv Security Forum online discussion, criticized Ukraine's cooperation with the EU. According to Shariy, EU financial assistance is a joke, while the Deep and Comprehensive Free Trade Agreement (DCFTA) is lucrative only for the EU. Shariy also stated that with the visa-free regime the EU merely threw Ukrainians a bone. "The visa-free regime helping Ukraine? I saw the visa liberalisation as like beads: "You sold us your gold, here are your beads," Shariy said in a reference to a story from America's colonisation.

Viktor Medvedchuk, one of the leaders of the Opposition Platform---For Life party, argued in an interview on NewsOne (which he allegedly controls) that free trade with the EU has destroyed Ukraine's economy.  "We have not found a market for products and services in the EU, but we lost the markets of the Russian Federation and the CIS countries, and did not work to develop markets for our products and services in the countries of the Asia-Pacific region," Medvedchuk claimed. He also argued that "we [Ukrainians] have been driven into a dead-end of the destruction of the economy through the free trade zone with the EU."

Yevheniy Shevchenko, an MP from the Servant of the People party said during a talk show on ZIK that Petro Poroshenko "mindlessly signed" the EU-Ukraine Association Agreement after assuming office. According to Shevchenko, Ukraine received unfavourable conditions under the agreement with regard to export quotas while at the same time losing access to the Russian market, which had been way more beneficial for Ukraine.

"The West is acting against Opposition Platform---For Life" 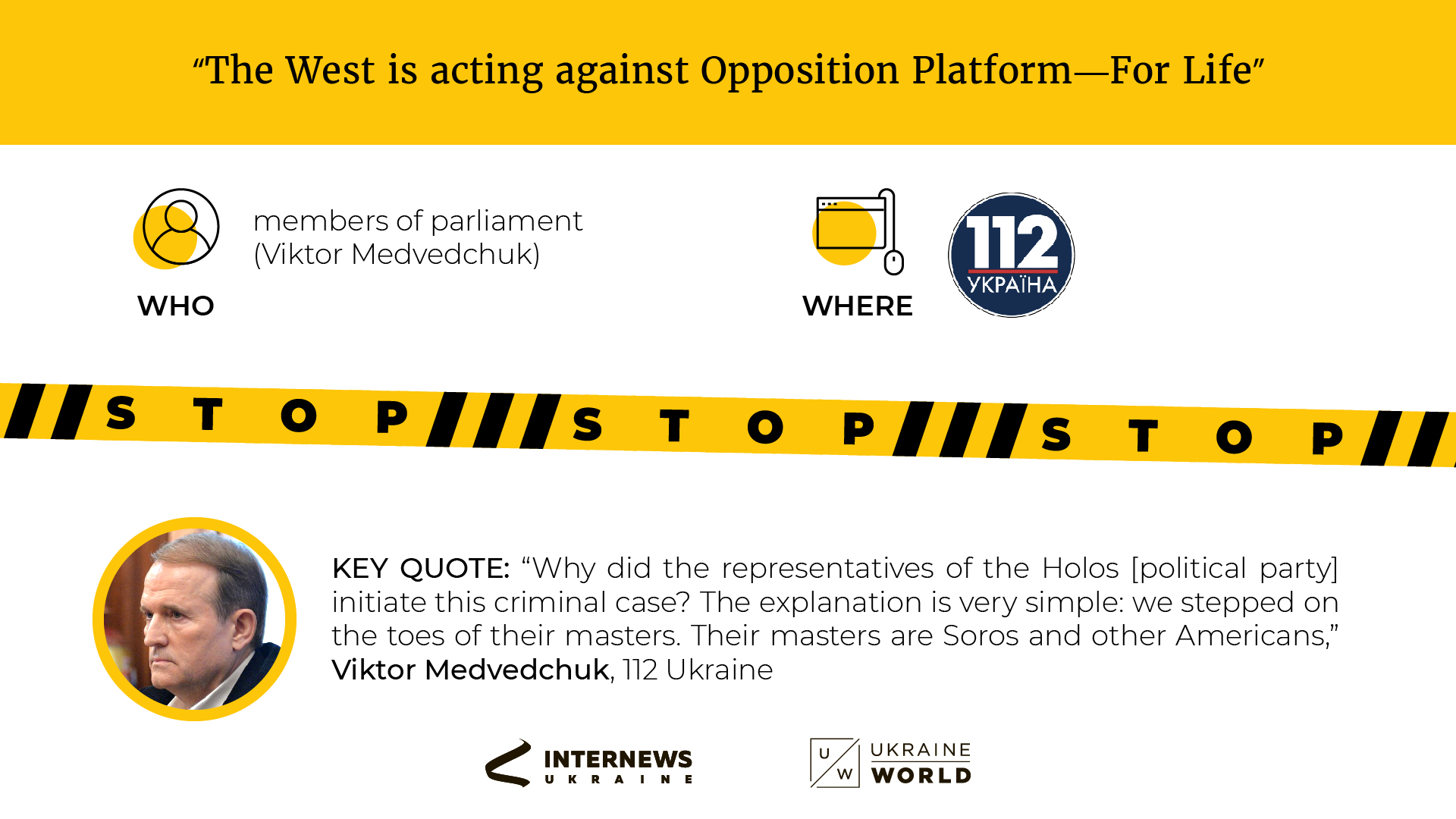 On May 23, activists of the far-right National Corpus political party attacked the office of the Opposition Platform---For Life party in Kyiv. Opposition politicians said in their statement that "this attack is an attempt at revenge for the principled position of our party regarding the implementation of the Minsk agreements and the establishment of peace in Donbas, as well as the inadmissibility of the external control of Ukraine by the United States of America."

This story continued to unravel when criminal proceedings were opened against Opposition Platform---For Life party members who visited Moscow in March to meet their counterparts from the Russian State Duma. "Why did the representatives of the Holos [political party] initiate this criminal case? The explanation is very simple: we stepped on the toes of their masters. Their masters are Soros and other Americans," Medvedchuk declared on 112 Ukraine.

The Clash of Oligarchs: Key Features of Ukraine’s Media Sphere

Ukrainian students and professors going abroad: is it good or bad? | Ep. 160

The war has made Ukrainian universities much more international than they used to be. Listen to our new episode to know more.