May 24, 2021
While Minsk officials remain rather tight-lipped about the arrest of Raman Pratasevich, Ukraine has joined the international outcry and demand for action. 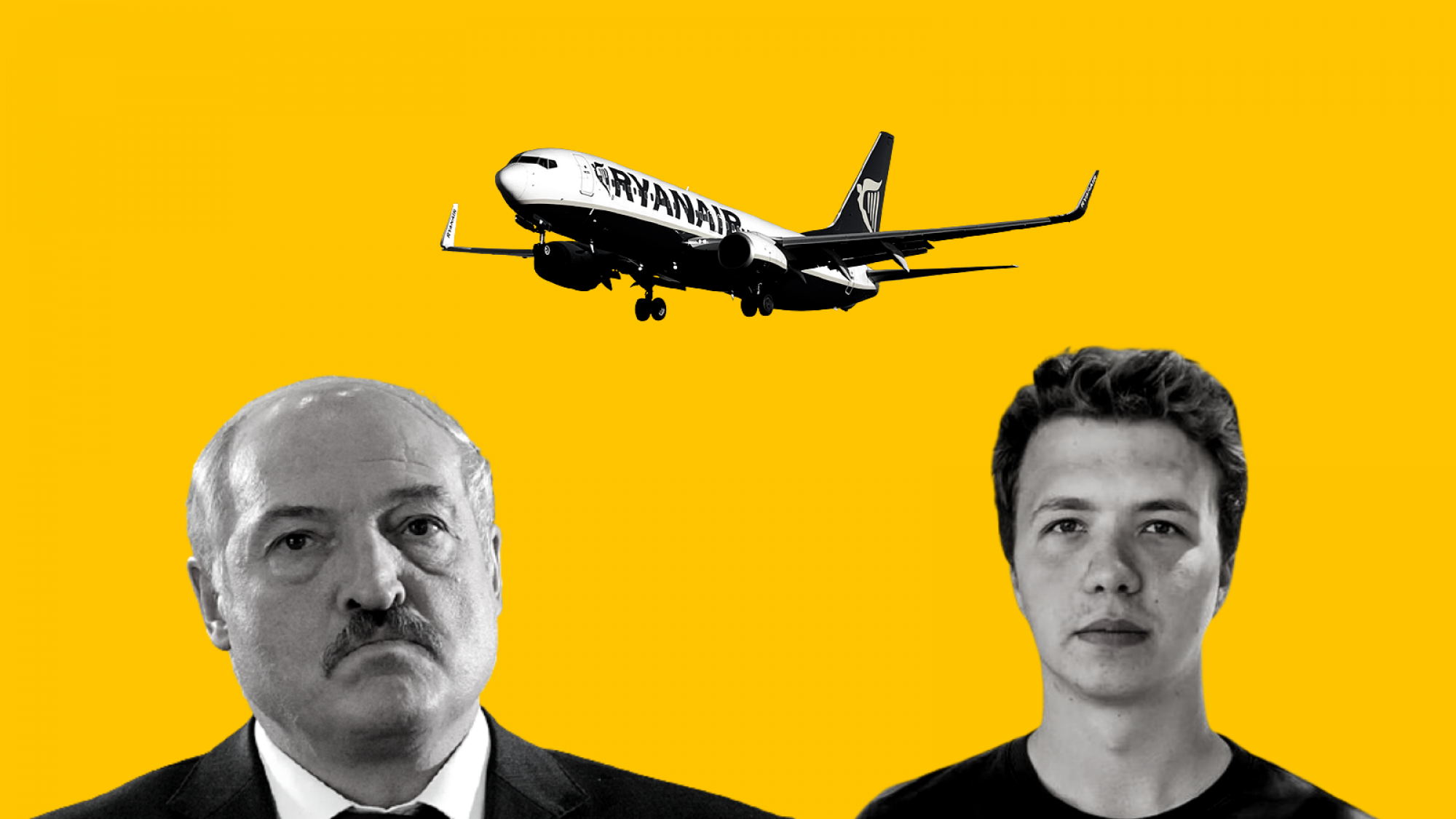 A furious call for sanctions against the Belarusian dictator Alyaksandr Lukashenka followed swiftly after his government forced a Ryanair passenger flight flying from Athens to Vilnius to land Minsk on May 23, and arrested Belarusian opposition journalist Raman Pratasevich and his girlfriend Sofia Sapega. Pratasevich, who is the founder and former editor-in-chief of the popular NEXTA Telegram channel, was wanted for his active role in organising the protests against Lukashenka following last year's rigged elections. His NEXTA-Live channel, which played a key role in coordinating the protests, was designated as extremist in Belarus. Based on this, Pratasevich faces 15 years in prison, or even worse.

Together with leaders of the EU and the United States, Ukrainian officials promptly condemned what the international community has called a "hijacking" of a civilian airliner and a "state-sponsored act of terror".

Spokesman Oleh Nikolenko tweeted that Lukashenka's action is "another attack on freedom of speech by the Belarusian authorities" and demanded that they uphold Pratasevich's rights. Meanwhile, the current whereabouts and condition of the dissident journalist and his girlfriend are unknown.

The situation has put Pratasevich's life in grave jeopardy, as it has been reported that the activist now risks undergoing torture or even execution.

"What the Belarusian regime has just done can be compared to Khashoghi's brutal murder by the Saudi government in Turkey!"

Ukrainian journalist and author Nataliya Gumenyuk posted on her Facebook. "There is still a chance to save Raman, yet Lukashenka doesn't care about anybody's concerns", she added.

That day, around a hundred Ukrainians and Belarusians staged a protest against  Raman Pratasevich's detention in front of the headquarters of the Foreign Ministry in Kyiv. With placards reading "Long live Belarus" (a common rallying cry of the opposition protests) and "Stop ignoring terrorism", they called Alyaksandr Lukashenka's brazen act an "unprecedented method of international kidnapping."

Protesters demanded that the Ukrainian government firmly oppose him with "real measures of influence, not just diplomatic ones."

The following day, the Ukrainian Presidential Administration expressed even stronger condemnation and concern. "The aerial incident on the Athens-Vilnius flight is, undoubtedly, a manifestation of international terrorism. And the incident must be interpreted unequivocally", the advisor to the head of the Office of the President Mykhailo Podoliak told Ukrinform.

He called the hijacking of the airplane with the assistance of a Russian-made MiG warplane "a demonstrative challenge to the modern world".

Podoliak urged action against the authoritarian Belarusian regime, such as cutting off Belarusian airspace from the "civilized world" and "direct personal sanctions".

Podoliak added that "There is no longer any possible compromise out of the protracted political crisis with the participation of European mediators."

Many see the hand of Russian President Vladimir Putin in the actions of Alyaksandr Lukashenka, a notion endorsed by former Ukrainian Minister of Foreign Affairs (2014-2019) Pavlo Klimkin on his Twitter. "For Putin, this is a gift and it is likely that [the hijacking] wouldn't have been possible without the Russian secret services. Now Putin has Lukashenko in his pocket," he argued.

Klimkin says that it has now become dangerous for Ukrainians to travel to Belarus, since Lukashenka has resorted to piracy and state terrorism and "is ready to do anything."

He also hopes for a firm response from the EU: "I would now stop all transit flow through Belarus. And as for the United States, I would confiscate all of Lukashenka's assets. That would be the minimum response", the Ukrainian diplomat tweeted.

Following the events, the ruling Servant of the People party of President Volodymyr Zelenskyi officially expelled Rada deputy Yevhen Shevchenko, who supports Lukashenka. Later on, Zelenskyi responded to calls for action by instructing the Cabinet of Ministers to prepare an order terminating all direct flights between Ukraine and Belarus and forbidding transit through Belarusian airspace for all aircraft leaving from or bound for Ukraine.

With many Ukrainians calling the West to impose tough sanctions on Lukashenka and seal off Belarusian airspace, some like journalist Olha Tokariuk are worried about the reverse effect it might have on its citizens. "Belarusians have been escaping the country in droves in the last months. Activists and journalists are in particular danger", Olha Tokariuk tweeted. "Lukashenka and his enabler Putin must be punished. But people of Belarus should be protected. We cannot isolate them and leave them alone to face their dictator." 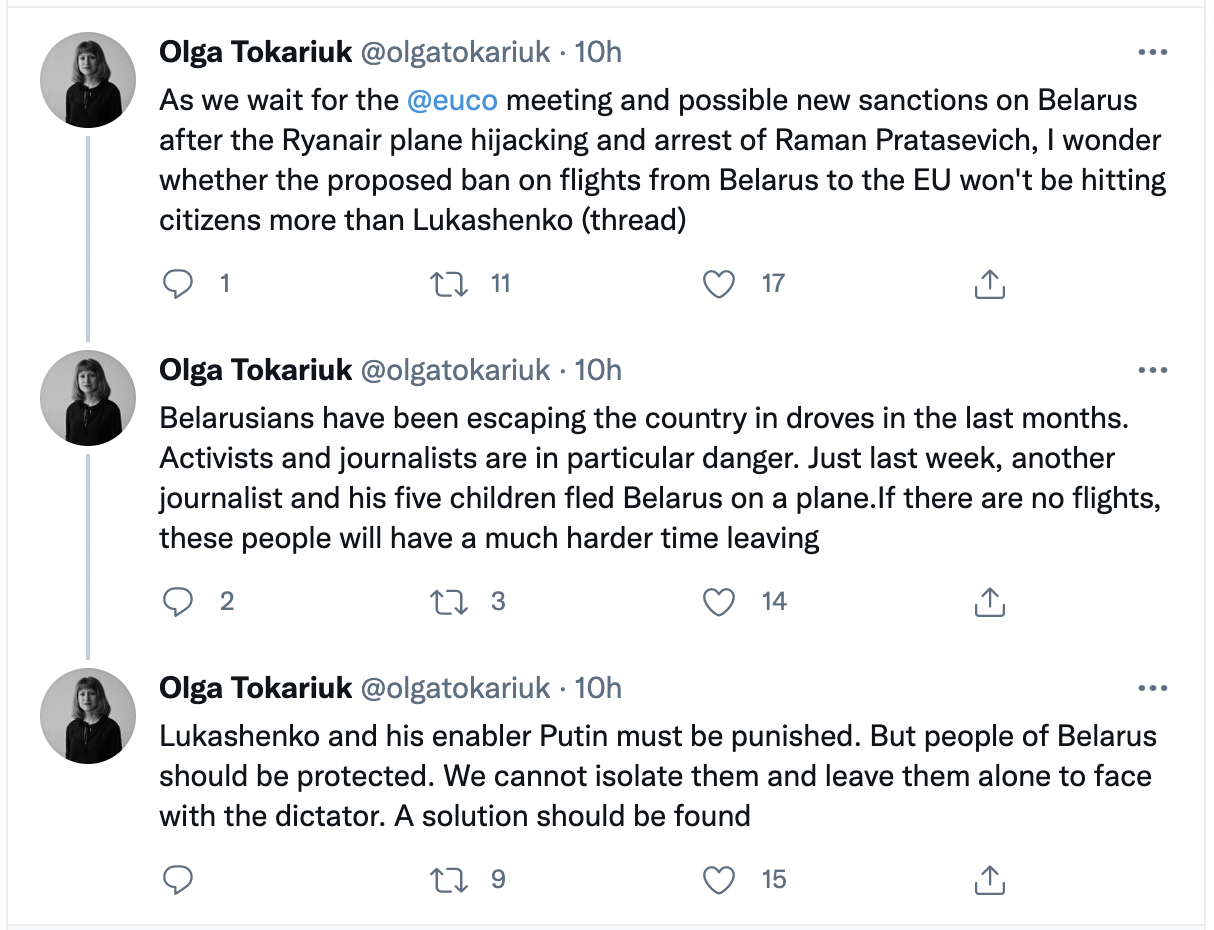 Hoping for the West to act with more than mere "concern", Ukrainians realize the danger of having another totalitarian state at their borders, and are trying to make clear the international threats it entails for the EU, as well.

Before Zelenskyi's Monday afternoon order, Danylo Lubkivskyi, director of the Kyiv Security Forum, criticized the Ukrainian government's official reaction as sluggish. "Already today, the situation in Belarus and the policy towards the Lukashenka regime should be the subject of consideration by our National Security Council. It is this state body that must act in situations where acts of state terrorism take place near our borders", Lubkivskyi said on Facebook. He also called for Ukraine to further expand and strengthen sanctions and make the struggle for the release of Raman Protasevich and other dissidents part of Ukraine's long-term foreign policy.

Lubkivskyi explained that "in the person of Lukashenka'', Ukraine is "dealing with Putin".

"If Ukraine does not fight for the freedom of Belarus, tomorrow no one will fight for our freedom."

Ukrainians will choose the next Verkhovna Rada on 21 July. We have listed key parties which will fight for the places in the parliament.
Opinions
February 11, 2022

What Ukrainians Think of NATO and the EU

Since 2014, Ukraine has been consistently pursuing EU and NATO membership – and public support for joining both organizations has reached unprecedented highs